I’m pleased to say we arrived home safely in about two and a half hours yesterday!

The rain was absolutely tipping down, but fortunately hubby was driving. 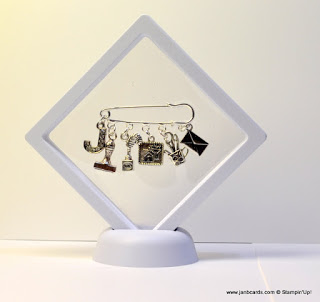 It gave me the opportunity to go through the new catalogue deciding what I’ll be buying.

I think it would have been quicker to decide what I wouldn’t be buying! LOL!

I had a fabulous time at OnStage as always, but it’s extra special nowadays because I have members of my team coming too!

The first one I’m sharing is a pin made by Maire, which she put in the most amazing “floating” frame.

She made one of these pins fr all five of us, and we took them out of the frames so we could wear them as a Super Stars “team badge” all day.

It’s now back in it’s frame and will stay there untill the next Convention! 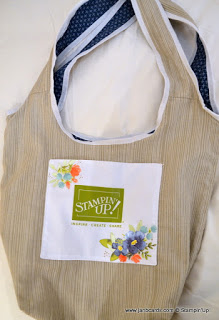 The charms on the pin, from left to right are my initial J, a hand rubber stamp, an ink pot with a feather quill pen, a painting, a pot of brushes and scissors, and an envelope – it’s fabulous!. Thanks, Maire.

When we checked in at the Convention we received a fabulous reversable shoulder bag from Stampin’ Up! 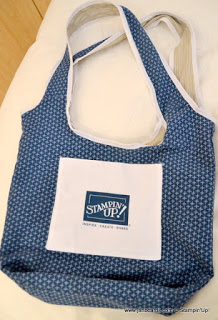 Inside the bag was a light box, a Stampin’ Up! note book, a new stamp set, a pack of three Stampin’ Up! logo pens, and a badge for the Prize Patrol! 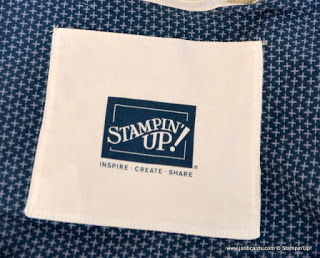 Obviously there wasn’t room for “love” so I put a ♥ instead!

Today’s one of those days when I have more photographs to share with you than I have words to write! LOL! 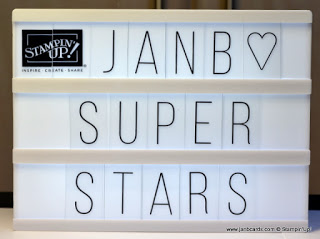 The second to last photograph shows the box the light box came in, and the box I received at CentreStage on Friday night which had a navy blue flask in it.

In front of the two boxes is a tambourine from Friday evening, as we were asked to make a lot of noise to celebrate Stampin’ Up!’s 30th anniversary!

Every place setting on the tables either had a tambourine or a cow bell, and I swapped my cowbell with Fiona who I was sitting next to! Thanks, Fiona! 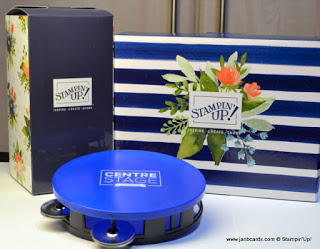 That’s it for today. I know this may sound boring, but tomorrow I’m back into my comfortable routine!

I love going to events, and meeting like-minded people, but I also like my routine; it’s a bit like holidays!

I love travelling, but I love getting back home again – I’m sure you know what I mean! ☺ 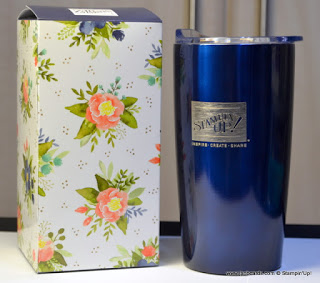 I hope you’ve had a great weekend, and are looking forward to the challenges of the new week.