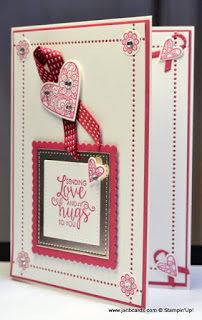 I am so excited to tell you all that I promoted to Gold yesterday – I’m so thrilled! I’m on cloud 9!

Yesterday
Stampin’ Up! updated the Clearance Rack, without giving us advance
notice!

Unfortunately, the system was down when I found out at 7.30 am
yesterday morning, and by the time it was back up again, so many
products had sold out!

My biggest frustration was not being able to tell
my customers as soon as I would like to have been able to!

If you’re
reading this, and you are one of my customers, I’m
truly sorry! 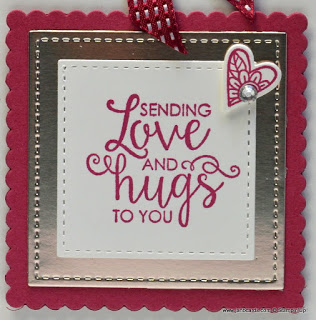 This
morning, I uploaded my video which shows how I made the Ribbon of
Courage card I shared with you on Monday.

I almost kept to the same
design!

Apart from the usual colour change – for the video I used Rose
Red instead of Sweet Sugarplum – I also changed the sentiment.

On the
original card, I adhered the four circle flowers in each corner by
adhering them with Dimensionals, but I wasn’t totally happy with them. 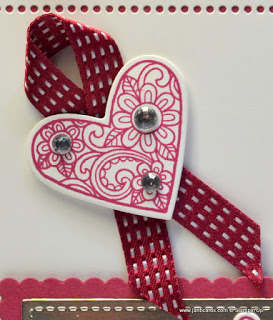 In the video I decided to adhere them directly on to the corners using
Tombow, and I do prefer them this way.

I felt that by popping them up on
Dimensionals, gave them more prominence than they warranted; I felt they distracted from the main image and the ribbon! 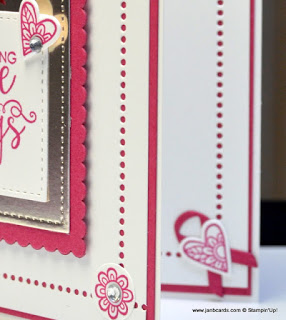 As
I didn’t have any ribbon in Rose Red, I had a look through my retired
stash and found one in Raspberry Ripple which was an InColour about
four or five years ago.

Although it’s not an exact match, I think it’s
close enough.

To
create the die cut hole frame on the front layer, there are two ways to
do it i.e. the perfectionists way or JanB’s way – in the video I
explained how to do the perfectionist’s way, and demonstrated the JanB way
i.e. the easy way! ☺ 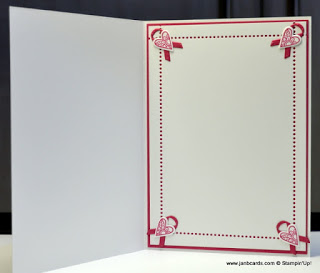 The die is from the Swirly Snowflakes Thinlits, and they co-ordinate with the Snowflake Sentiments. They were in the Christmas Catalogue which has now retired, but they are being carried forward to the new Annual Catalogue. Although these products aren’t showing in a current catalogue, you can still order them! 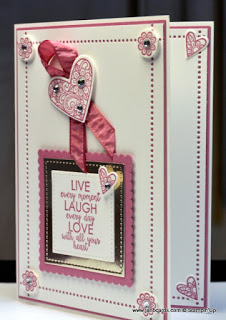 These are the catalogue numbers if you want to order them:-

In the video I called the foil I used Rose Foil; it is
actually called Champagne Foil 144748; and like the dies and the stamp sets, it was in the Christmas Catalogue, and will be carried forward, so can still be ordered! ☺

Another
change I made to this card is on the inside where I adhered the hearts. 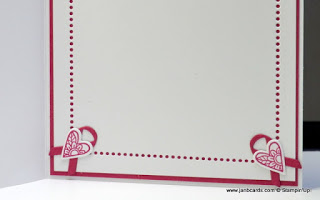 In the video, I used the very small ribbon die and cut four using Rose
Red Cardstock, and adhered them under the hearts. 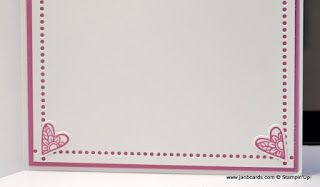 I decided to adhere
the two at the bottom up the right way as I thought they would silly
upside down.