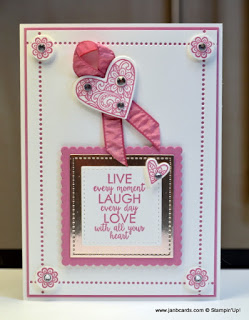 Today’s
card is another one that was inspired by a swap I received at OnStage
a couple of weekends ago.

My finished card doesn’t have the same clean look as the swap, but I’m still happy with how it turned out!

The swap was made by Barbara Hill; so many
thanks for the inspiration, Barbara. 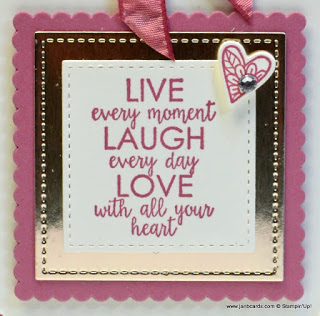 I
chose Sweet Sugarplum as my colour, and decided to follow Barbara’s
card except for drawing the lines round the outside.

As I struggle with straight
lines anyway, I didn’t want to try and get wavy lines that looked
professionally drawn, and without allowing my pen to blob because I
hesitated!  LOL! 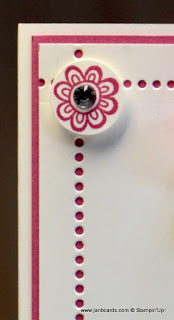 I decided to go through my dies to find a shape I could draw
along, like a scallop edge!

I came across the Detailed Santa Thinlits
Dies – this will be retiring on 31st May 2018 – that has a strip similar
to the one I used from the Swirly Snowflakes Thinlits Dies.

The difference is that the “holes” are short slanted “holes”rather than plain circle holes!

I
considered drawing along the edge of the trellis-like strip die in the
Flourish Thinlits Dies, and I also considered die cutting the little strip
of leaves in the Little Loves Framelits Dies! 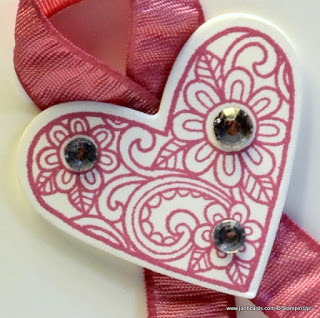 Another possibility I
found was a different trellis-like die in the Petals and More Thinlits
Dies, and another scallop edge in the Popcorn Box Thinlits Dies – this
will also be retiring at the end of May!

The
Swirly Snowflakes Thinlits Dies is being carried forward to the new
catalogue, together with the co-ordinating Snowflakes Sentiments Stamp
Set.

To cut the line of holes on my Whisper White layer, I positioned
the die along the edge, cranked it through the Big Shot, and did the same to
the next three sides. 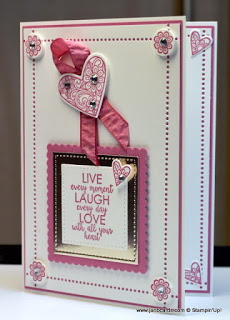 When I laid
this on the Sweet Sugarplum layer, I thought the holes were too close to
the edges, and tried again!

This time, I measured in at 1/8″ on all four
sides, and cut all four sides again.

This time I was much happier, but
rather than discarding the first Whisper White layer, I used it as a
layer inside the card, so you could see what it looked like, and you
could decide which you preferred! 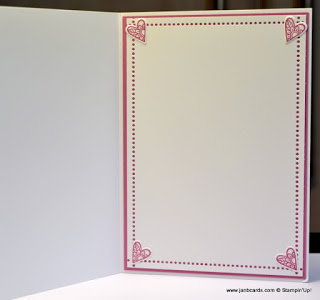 The
other products I used on my card include the Rose Gold Foil Paper for
the layer under the top, and the Ruched Ribbon that was available during
the first year Sweet Sugarplume came in as an InColour!

The heart I adhered inside the card is the same as the small heart on the sentiment on the front of the card!

I hope you like today’s card, and maybe you’ll give it a go! ☺