Hello, Crafters.
Yesterday I had a play with the Delightfully Detailed Laser-Cut
Specialty Paper, which I fell in love with when we had it as
a make-n-take at the Stampin’ Up! OnStage Convention in April. 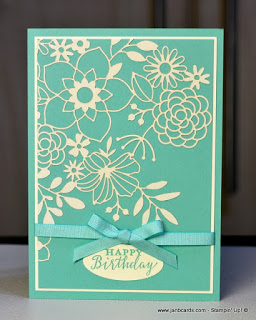 There are eight sheets in the pack, with four sheets each of two
designs. One sheet is made of card fronts and decorative strips,
and the other design is a complete sheet of a floral laser-cut design. 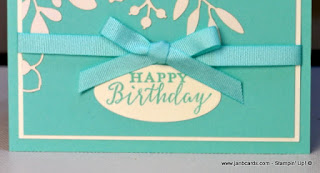 I used the latter for today’s card, and I started with a coloured top layer
of cardstock, which I laid under one corner at a time, to see
what the design would look like, and which one I’d like for my card. 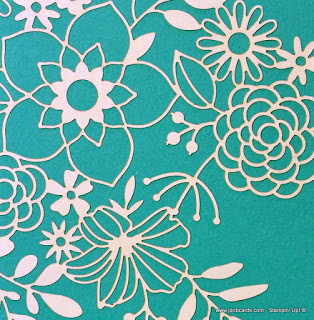 Once I had decided on the corner I wanted to use, I laid the
cardstock on my desk with the Laser-Cut Paper on top. Then,
very carefully, I cut out the approximate amount and shape
I wanted so I kept wastage to an absolute minimum. 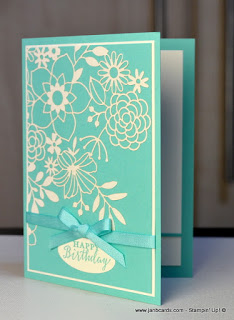 There is a Very Vanilla side and a Whisper White side to
this specialty paper – my preference is the Very Vanilla side. I
chose Coastal Cabanna as my card base and for the top layer
for my laser cut image to sit on. 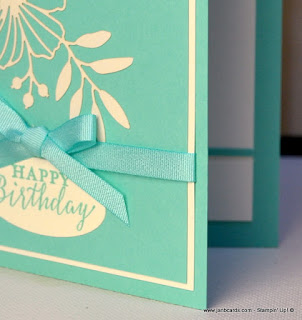 I put tiny dabs of Tombow in as many places as I could on the
laser-cut, and adhered it to the top layer. I trimmed off the
straight edges that I had made sure had come off the edge of my
cardstock. I stamped the sentiment, which is from the
Detailed With Love Stamp Set, using Coastal Cabanna
Ink onto a piece of Very Vanilla cardstock. 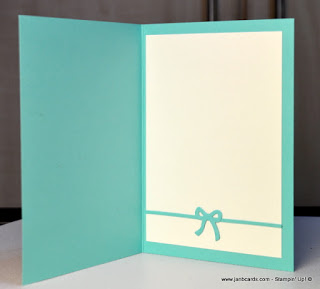 I tied some old Coastal Cabanna ribbon (I think it was a Sale-a-bration
gift about four years ago!) around the top two layers and tied in a
bow. I wasn’t sure how to decorate the inside of the card so that
it would tie in with the front, so I used a very thin strip of Coastal
Cabanna Cardstock and adhered a die-cut bow from the Bouquet
Bunch Framelits – I think it finishes the card of beautifully! 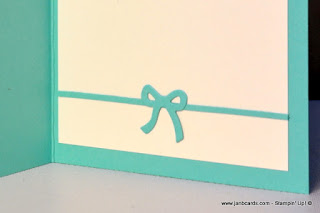 What with this Specialty Paper as well as the Graceful Glass
Designer Vellum, we certainly do have some fabulous paper
to play with in the new 2018 – 2019 Annual catalogue! Don’t you agree!
That’s about it from me today, so until tomorrow, happy crafting.
JanB.