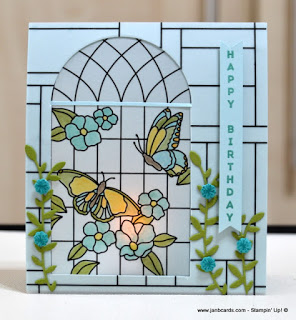 We
had a lovely day yesterday celebrating daughter, Vicki’s
parents-in-law
Golden Wedding Anniversary. All four of Tom
and Iris’s sons were there,
each with their wife and children,
plus quite a lot of other family
members, as well as friends and
neighbours, but more about that
tomorrow!! 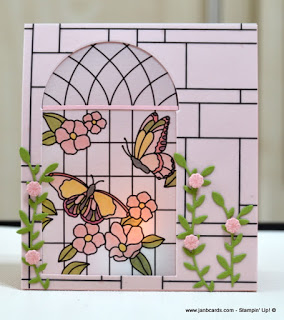 Today’s video shows how I made a tent-type card that has a
stained glass window, behind which you can put a
battery-operated tealight! The card is fixed so the tealight
sits inside and the card won’t fall over. 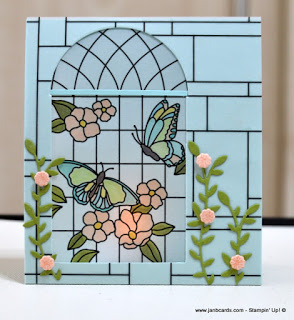 My first card is in Soft Sky Cardstock (CS) which is now a
retired colour. I added Happy Birthday sentiment from the Vertical
Greetings Stamp Set, to this card which I think worked well. 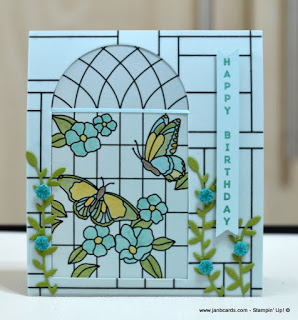 I also think this will be brilliant for other occasions e.g. weddings,
anniversaries, engagements, etc. 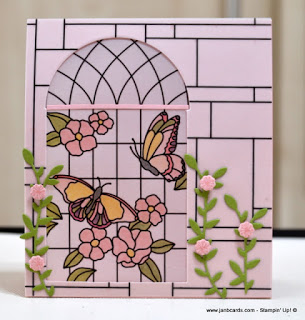 For the second card I used Blushing Bride, but my camcorder ran
out of memory  just as I was about to make the sentiment! Frustrating
as this was, I liked the look of the card without a sentiment just
as much as the one with the sentiment. 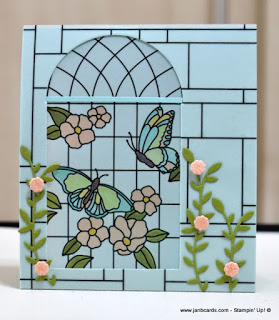 I decided not to add a sentiment in the second attempt so I can
save these cards and as a sentiment as and when! The first
three photographs show each of the three cards with a tealight
behind the window, and the second three photographs without.
I wish you a very blessed Sunday. I will be back tomorrow
with some photographs from yesterday’s celebrations.
So until tomorrow, happy crafting.
JanB.