Hello, Crafters.
What a lovely bundle the Sweet Storybook is (page 160)? It’s  a
two-step stamping set, and the image of the two mice is super,
albeit they are rather fat and look as if they’ve
rather over-indulged! 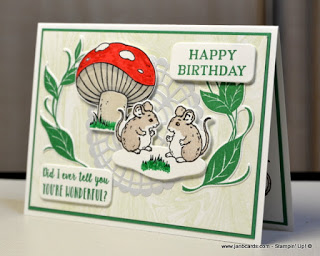 They also have their eyes closed, which I really don’t like, so I drew on
them to make them open – so much nicer looking! I found this
image to be one of the easiest two-step images ever! I stamped
the image using Tuxedo Black Stazon, and coloured the bodies
using first generation Sahara Sand Ink. 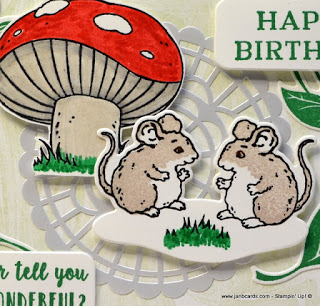 The easiest way I found to do the second step was to line the tail
up first, then the ears, and then the rest of the body! When it
came to colouring the toadstool, I forgot there’s a stamp
for the second step stamping. 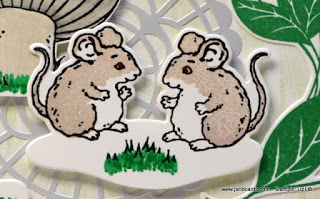 Instead, I coloured it by hand using my Poppy Parade Marker Pen.
For the stalk and the underside of the top of the mushroom, I
used the Light Crumb Cake Stampin’ Blend. 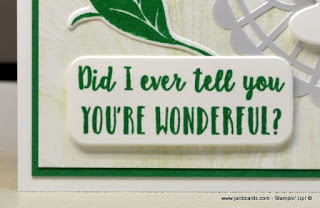 When I stamped the image using Stazon, I didn’t know that
I’d be colouring with my Blends! It smudged slightly on the stalk
but not enough to worry about! I used my Marbled background stamp
using Soft Sea Foam Ink, stamped off once. 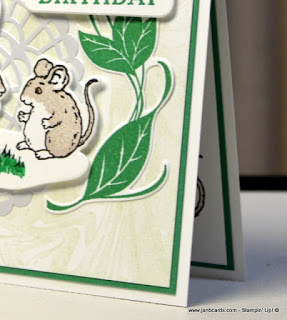 I think the Soft Sea Foam goes well with the Call Me Clover Cardstock
and Ink I’ve used for this card! I adhered one of our
Pearlised Doilies in the centre so it made the mic and
toadstool, the central point of my card. 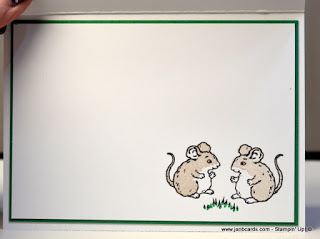 The HAPPY BIRTHDAY sentiment is from the Perenniel Birthday
Stamp Set, and I chose it as it fitted the same die that cut the other
sentiment: DID I EVER TELL YOU YOU’RE WONDERFUL?”
Such a beautiful sentiment!

To decorate the inside of my card I stamped the mice again in
exactly the same way as I did on the front of the card. That’s about it from
me today! As I don’t have a scheduled blog for tomorrow, I’ll be
back to share some more photographs from our recent trip
to Cornwall! In the meantime, happy crafting!
JanB,