Hello, Crafters.
I fell in love with the Best Bunny bundle when I first saw it back
in April, so I’m really surprised that this is the first time I’ve played
with it. I have to say that I’m not totally happy with today’s
card although I love the concept. 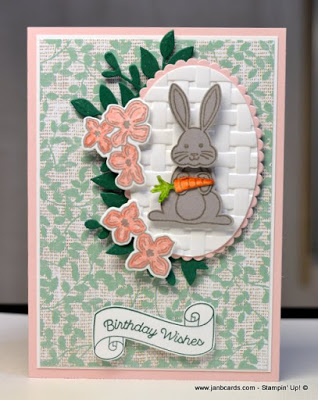 I would have liked to have changed the flowers I used, but I was
running out of time and decided I was being overly critical………..as
I often am! LOL!  I really went out of my comfort zone with
my colour scheme, but I’m pleased I rose to the challenge! 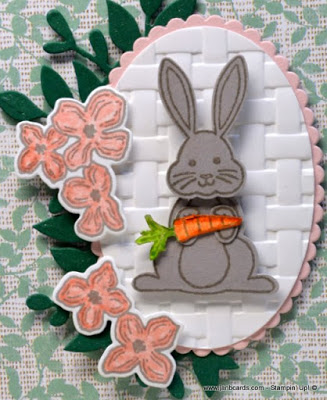 There are three different faces to choose from for the bunny,
which range from normal – which is the one I’ve used, then there’s
one with him winking, and the last one is with buck teeth! When I
first started working on the rabbit, I decided that I wasn’t goining to
use the paws, but in the end, I decided the bunny looked
funny without them!

They are a great addition to this stamp set as they can be used up – as
I have done – or down so the paws can be put under the present like
he carrying it! Without the paws, it’s easy to make it look as if you’re
looking at the rabbit from the back. 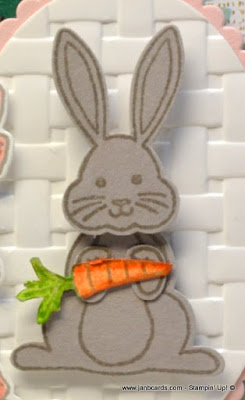 There’s a stamp and die for a fluffy tail, or it’d be just as easy to
use a small piece of cotton wool or a tiny white pom-pom! The
more I look at my card, the more ideas keep
popping into my mind! 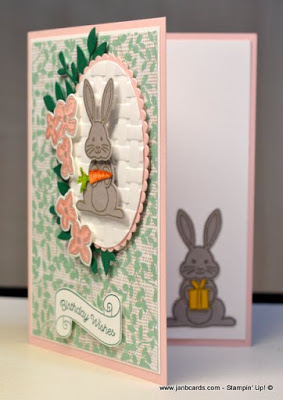 I used three stamp sets for today’s card: Best Bunny, Floral
Frames for the flowers, and Birthday Posies for the sentiment. I
really seem to be stuck on this stamp set for my sentiment over
the past few days!  I must try and use something a bit different!!
The die sets I used are the Foliage Frame, which goes with the
Floral Frames, and the Layering Ovals. 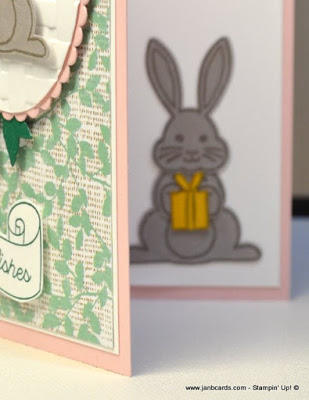 The Best Bunny Stamp Set is on offer as a bundle with the
Rabbit Builder Punch, and punches out the head, the body, the
paws, and the pom-pom tail. Although it doesn’t show up in
the photographs – except possibly the close up of the rabbit, I’ve
painted both rabbits, the flowers, the leaves, the carrot and
the gift with my Clear Wink of Stella Glitter Pen. 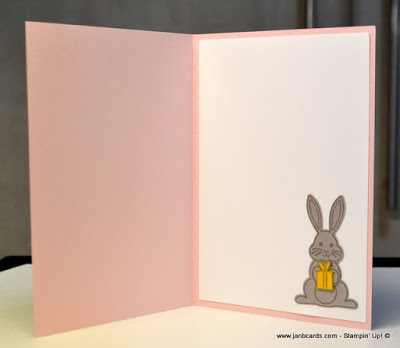 The other two products I’ve used to create today’s card is the Basket
Weave Dynamic Embossing Folder, and the Nature’s Poem Designer
Series Paper. I’m going to play with this set a bit more because I do
think there are quite a few things that can be done with this bundle. 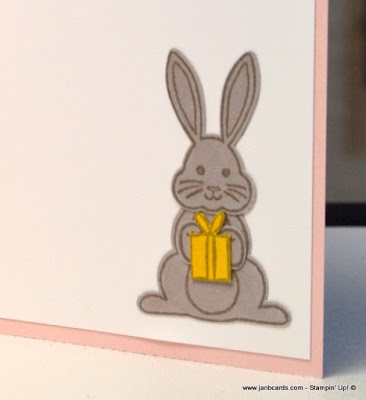 I had a thought yesterday morning that made me panic a bit!
I only have seventeen days to make my swaps for the Alaska Incentive
Trip, as well as four more videos that I can post while I’m away! I
think I’d better get a move on, don’t you? LOL!
That’s it from me today, until tomorrow, happy crafting.
JanB.