Hello, Crafters.
Today’s video is my 400th crafting tutorial! It feels really
strange because I don’t feel that I have made anywhere near
as many as that! Today’s card is another example of using
a non-picture design from the Graceful Glass 6″ x 6″ Designer
Vellum as a background. 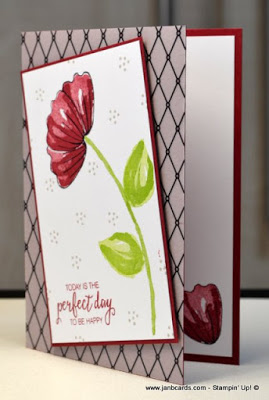 I think probably most of us find the picture designs relatively easy
to use, but the non-picture designs not quite so!  If you saw my
previous video where I used this vellum as a background, you’ll
remember I used a die-cut THANK YOU but it didn’t work quite
so well with the busier pattern.
Video 398 HOW TO…….Heat emboss die-cts. 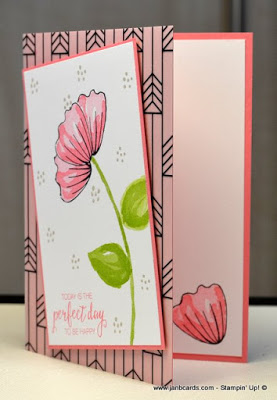 As there is a large area of white area on today’s card,
it doesn’t matter how busy the pattern on the vellum is; they’d
all work!  As I was finishing my card off while videoing, I
forgot to decorate the inside of the card. I finished it after I’d
finished the video, and you can see in the
photograph above that I stamped a single petal. 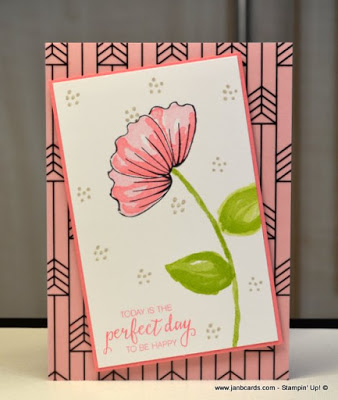 I made another similar card before I started videoing, where,
instead of making the coloured cardstock and vellum layer the
bottom of the card, I made both pieces a bit smaller and added
them to a Whisper White card base………….just to see what
it would look like.  Please see the next photograph. 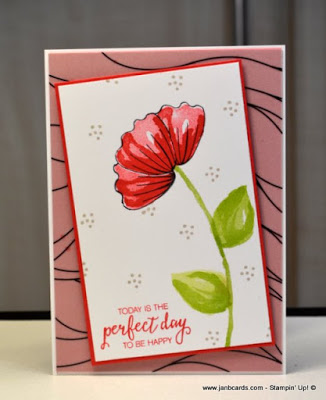 I decided I preferred the original design and
stayed with it for the video! I made this card using Poppy
Parade Cardstock and Ink. 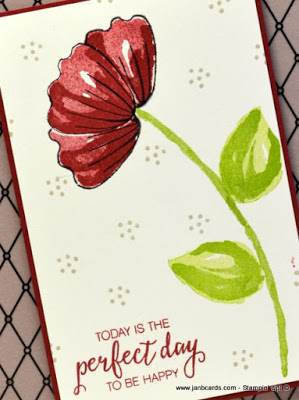 I thought of another option which was to put a layer of Poppy
Parade between the vellum and the Whisper White card base.
Then I thought about using a Poppy Parade base for the card,
and then to cut the vellum 1/8″ shorter on allsides.
By this time I decided to give up in case I thought of even more options! LOL!
I hope you have a very blessed Sunday, and until tomorrow, happy crafting.
JanB.