Hello, Crafters.
When I shared this card last Saturday, I was overwhelmed with
all the positive feedback I received – I was really humbled! I was
asked if I’d make a video showing how I made the card, and
I’m only too pleased to share. 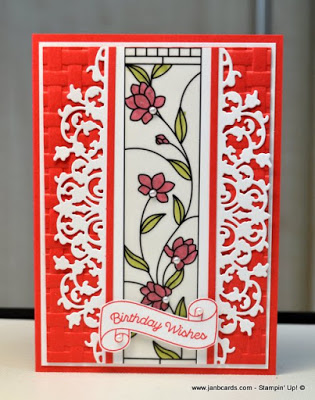 I chose Poppy Parade as my colour, but I don’t have any Poppy
Parade Stampin’ Blends so I used Dark Cherry Cobbler. It
isn’t great but I think it works OK! When I shared my last
video – No.386 – Dry-embossing on Vellum, I showed a couple
of pieces of the Graceful Glass Designer Vellum which I said I’d
use in future projects

One of the pieces was the dry embossed irises , which
are the same design as the painted ones I used in
Saturday’s card. I decided to use the image in the same
style of card to see what it looked like both ways. 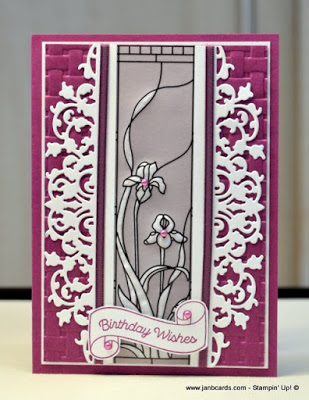 I found it very fiddly trying to mount the dry embossed image
for two reasons. Firstly, the dry embossing
had caused so much dimension, and secondly when the
four bookmarks are cut into four strips, I was left with two very
slim sides that need to be used to glue them down. 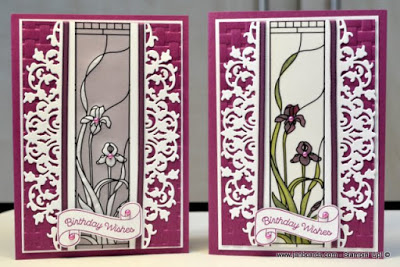 The real problem is having to be careful where the adhesive goes
i.e. enough to adhere it down securely, but without being visible!
So my conclusion on this design is to stay with the painted image,
because it’s mounted onto a strip of Whisper White Cardstock (CS),
and then adhered to the card with Tombow.

You may remember, when I was telling you about the delicate lace
that I’d adhered inside of my first card? I said I’d adhered it
horizontally first of all, but very quickly whipped it off
because my card was vertical card. 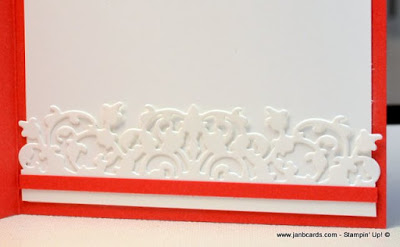 It was only a little while later that I realised I could have left it vertical
as the lace on the front was vertical! DOH. Never mind, I
decided to stay with horizontal. 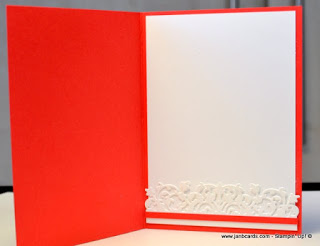 When I was photographing my card after I’d finished the video, I
decided to add a small strip of red across the lace on the inside
of the card. I think it added a nice finishing touch!
Today, Hubby and I are out shopping for some last minute bits
and pieces for Alaska! ☺☺☺
That’s it from me today. Until tomorrow, happy crafting.
JanB.