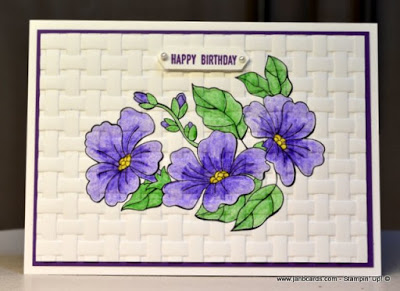 When I was  prepping for yesterday’s video, I stamped and
coloured the complete image before I started videoing. This
enabled me to stamp an image, and show how I coloured
one of the flowers, a leaf and two of the buds real time.  I then
said that I’d finish colouring the image off screen once I’d
finished videoing, and that I’d share what I decided  to do with
it! Today’s card is the result!  I haven’t used this technique
for quite some time, and  I’m oh so pleased with the result! 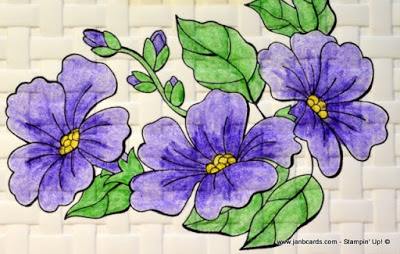 After I’d finished  colouring the rest of the image, I dry
embossed the complete layer using the  Basket Weave
Dynamic Embossing Folder. As I had painted the image on
one side, I sprayed just the reverse of the layer before
putting it through the Big Shot. 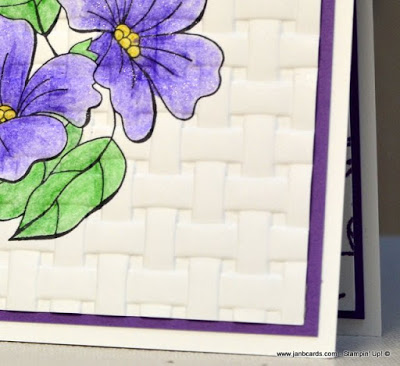 I used the HAPPY BIRTHDAY sentiment from the Itty Bitty
Greetings Stamp Set, and punched it out using the Classic
Label Punch.  I did consider stamping the image directly onto
the layer before embossing, but decided against this idea. 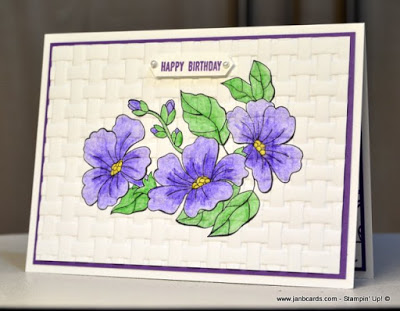 My concern was that because it’s a small sentiment, it could
get lost once it was embossed, whereas keeping it on its own
makes it stand out beautifully. I also think the Wink of Stella
also shows up more than normal – although still not in the
photgraphs – as it’s sitting in different directions on the
embossed area…………if you know what I mean! ☺ 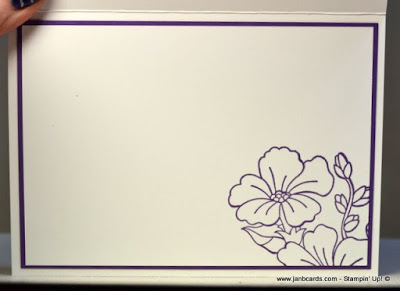 I have one more card to share with you tomorrow using this same
image – another no painting card, sort of! – and then I think
it’ll be time for me to move on!
That’s about it from me today.
I hope you have a lovely week, and until tomorrow, happy crafting.
JanB.