Hello, Crafters.
Today’s cards are half of my project, because I now
need to make a box to hold them; I’ll make later today,
and share with you tomorrow. The top layer is from
a sheet of Petal Promenade Designer Series
Paper (DSP) – please see the last photograph. 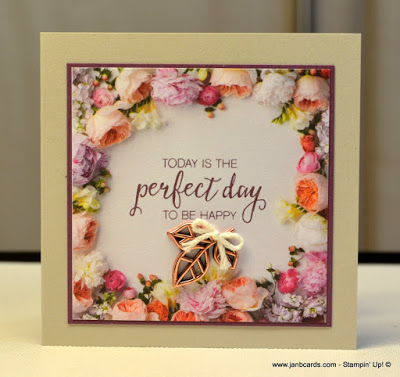 The first thing I did was to cut the long strip off along
the bottom, and then the three oblongs.  Still using my
trimmer, I cut off all six squares right on the very edge
– these are what I’ve used for my project. 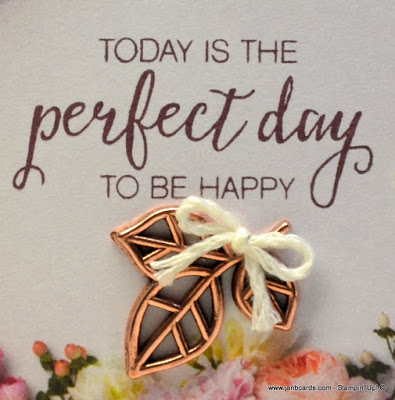 Next I used Fresh Fig Ink and stamped the sentiment,
which is from Bunch of Blossoms, in the centre of each
DSP square. After I’d adhered each of them to a layer of
Fresh Fig CS, I adhered them to the front of the card bases.

I experimented with several ideas of how I could finish
the top layer of my cards, and decided to use the copper
coloured Leaves Trinkets. I tried three different ribbons
and Baker’s Twine for the bow, and eventually decided
on some very soft Very Vanilla Baker’s Twine.

At this stage I was very happy with the result but ran out
of time, and haven’t decorated the insides – which I’ll do
later! My plan is to cut five squares in Fresh Fig CS the
same size as the Fresh Fig CS on the front of the card,
and then add a layer of Sahara Sand CS  that is
the same size as the DSP.

At the moment, I haven’t decided how I’ll decorate the
inside layers – as the saying goes, the jury’s still out!
I hope you like this project, which I think will make
a lovely thank you gift, or maybe a teacher’s gift. 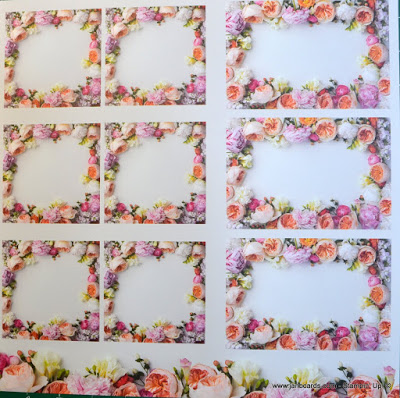 That’s about it from me today. Until tomorrow, happy crafting.
JanB.