Hello, Crafters.
Today I did something I’ve wanted to do for a long time, but have
always been a bit scared  because it’s IT related! But I was
given some guidance by Brenda Quintana who’s a delightful US
demonstrator I met on the Alaskan cruise. 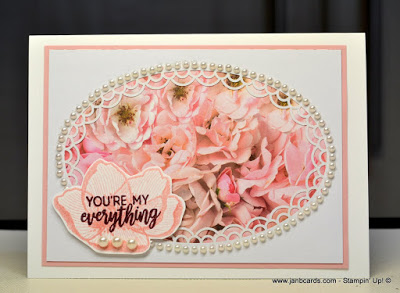 With Brenda’s guidance and my IT Manager aka Hubby, I’m now
a subscriber to These Are My Stamps (TAMS), and hopefully at
the end of today’s blog you’ll see the products I’ve used for today’s
card, all of which are linked to my Online Stampin’ Up! Shop! 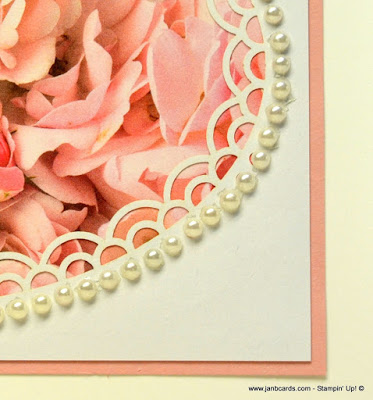 Because we were trying to sort out TAMS yesterday evening, I
decided to make a quick card for today’s blog, but as you know,
quick cards and me just don’t go together! LOL! I knew I wanted to
use one of the stunning designs in the Petal Promenade Designer
Series Paper (DSP), but that’s as far as my idea went. 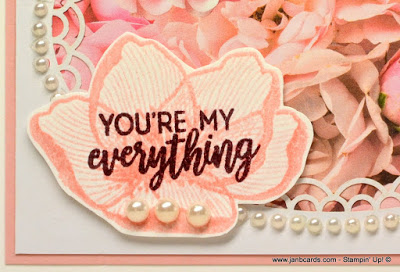 Yesterday’s video showed how I made the cards and box using
the “frames” design in this pack of DSP, so I thought about
reversing that idea and having the design in the middle with the
frame on the outside! I took the Delightfully Detailed Detailed Laser
Cut DSP out because I knew that had some designs which were
made with the idea that they would be big enough for a top layer. 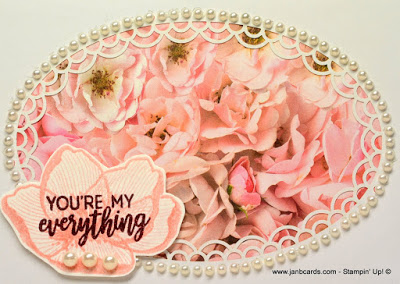 I was so pleased to see that one of the designs was actually a
frame – obviously I’d seen this before but had forgotten about it.
I eventually cut it to a size that would fit a UK card front, and cut
the DSP to the same size, and adhered the two together. 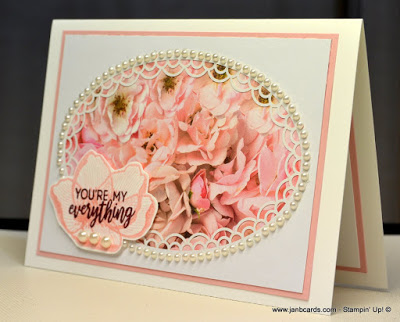 Next I adhered this to the card front, and stamped the outline
flower from the Beautiful Promenade Stamp Set, using Blushing
Bride Ink on Whisper White Cardstock (CS). I stamped the inside
of the flower with the stripe flower stamp, and fussy cut it without
leaving a white edge around it. 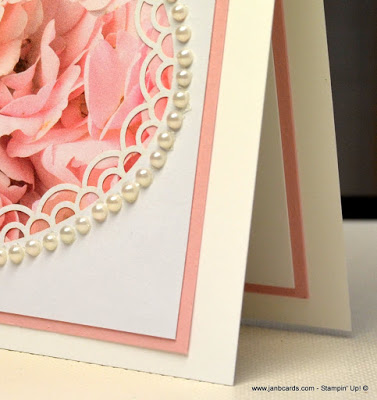 When I laid the flower on the card front I decided the flower really
needed to have a whte edging around it, so I stamped and fussy
cut another flower leaving a white edge. This one looked much
better, so I stamped the sentiment, which is from the same stamp
set as the flowers,  in the centre of the flower using Fresh Fig Ink. 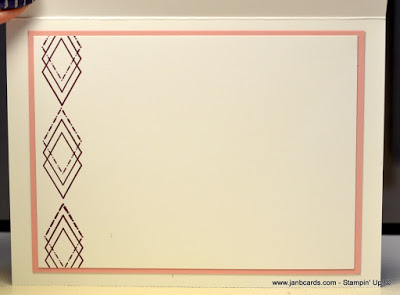 So far, so good; a delightfully quick card to make, but then I decided
to add one small pearl to each hole arround the inside of the frame.
I’m still using the Basic Pearls I stocked up on when Stampin’ Up!
announced they were being retired last year, (I believe) and
would be released in a new format. 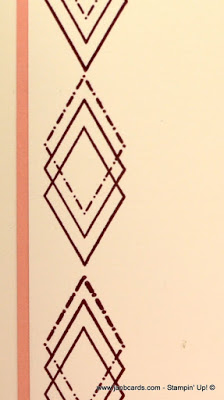 The old format included three strips of pearls that were all joined
together, so I had to cut them apart, which was quite
straightforward  until some of the Pearls decided to stick to my
non-stick scissors! How can this be?  I don’t know, but it was
time-consuming adhering all these Pearls on. But I’m pleased
I did as I’m very happy with the result!
That’s it from me today. I hope you like today’s “quick” card, and will think
about giving it a try. In the meantime, until tomorrow, happy crafting.
JanB.