Hello, Crafters.
What a wonderful day I had yesterday! It started with
coffee with Vicki which lasted nearly three hours – boy
can we talk! LOL! After that I drove over to my sister’s
hotel, which was just an eight minute drive away! I spent
a couple of hours catching up with her and her hubby. 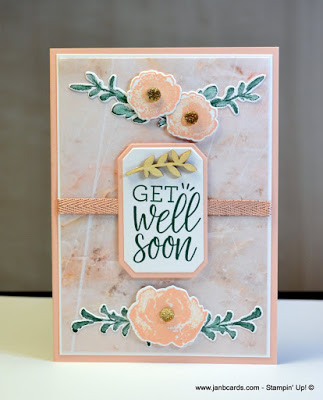 I came back home and did a bit of crafting, while waiting
for hubby to arrive home, so he could get himself ready so
we could take my sister Mavis, and her hubby Bill, out for
dinner yesterday evening. We had a really super time, and
we’ll be seeing them again when they come here this
afternoon, and will be staying for dinner. 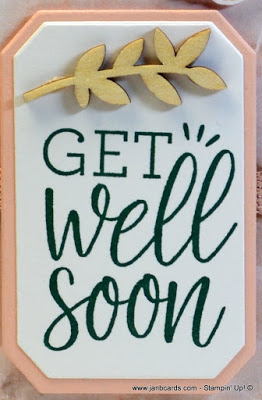 Today’s card was inspired by the decoration I added to the
Desk Mobile Phone Holder Video I shared yesterday. I’ve really
fallen in love with the First Frost Stamp Set, and I added
the Get Well Soon sentiment from the Healing Hugs Stamp Set.

The die I used for the sentiment is also from the Frosted
Bouquet Framelits Dies, which co-ordinates with the
First Frost Stamp Set. What I really like is that the
oblong die is made up of two dies, which allows the
sentiment to be die cut with the smaller die, and then
a layer to be die cut using the bigger die! 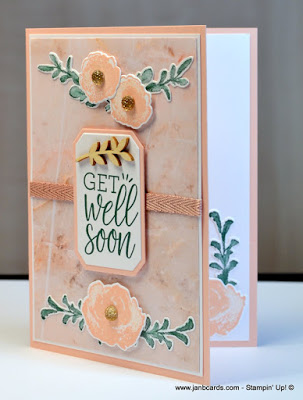 I decorated the sentiment with a small wooden branch from
the Frames Elements 146906 on page 199. Although it
isn’t visible in the photographs, I have painted all the flowers
and leaves using my Clear Wink of Stella Glitter
Pen 141897 on page 203. 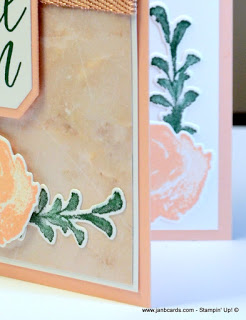 I chose Petal Pink as my main colour, but this is very much
a peachy colour rather than pink!The ribbon I adhered
around the centre is from the Metallic Ribbon Combo
Pack that’s availalable in the Annual Catalogue
146329 on page 201. 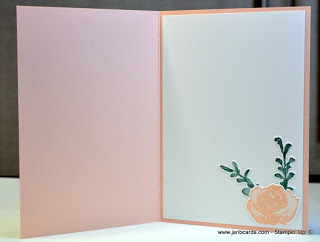 To finish the inside of the card, I adhered a layer of
Whisper White Cardstock, and decorated the bottom right-hand
corner. I cut one of the long sprigs of leaves in half, and
adhered both pieces under one large flower – all pieces
were also painted with my Clear Wink of Stella Glitter Pen. 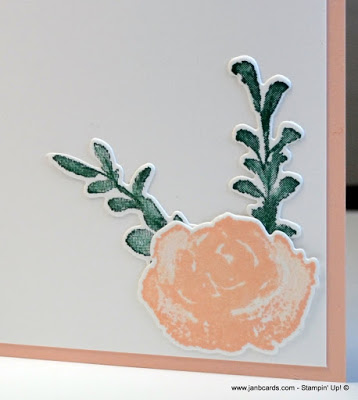 I’m not sure if I’ll have any time for crafting today, but I may
be able to snatch a couple of hours this morning!
Until tomorrow, happy crafting.
JanB.