Hello, Crafters.
I managed to snatch almost three hours crafting before
my sister and brother-in-law arrived yesterday afternoon,
and then I spent the rest of the day chatting, and catching up! 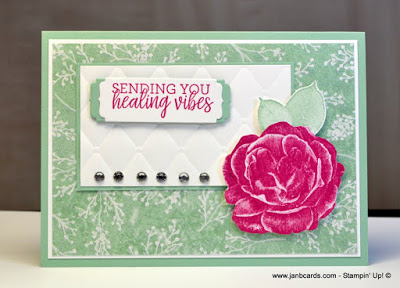 The stamp set I played with was the Healing Hugs (page 110
Annual Catalogue – AC), and I was amazed at the stunning
image the large flower stamp produced. I tried Rich
Razzleberry first, and decided it was too dark. Next I tried
Berry Burst Ink and was really impressed with the depth
of colour without losing any of the detail that was
etched into the stamp! 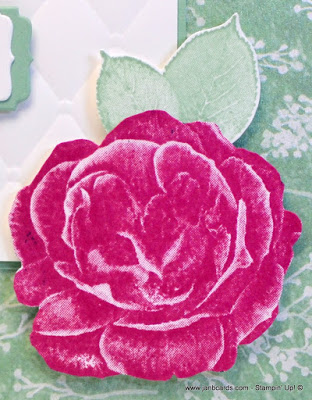 I used Berry Burst Ink to stamp the sentiment onto a strip
of Whisper White Cardstock (CS), which I then die cut
using the banner die in the Night Owl Thinlits Dies (page
41 Christmas Catalogue – CC). I re-die cut the sentiment to
shorten it, by sliding the die along the first part
I had die cut, and then I die cut anothr banner
but in Mint Macaroon. I layered the two banners on
top of each other to make sure the
sentiment was easily visible.

Before I started my card I had a rough idea about the
layout, accompanying colour, and Designer Series of Paper.
The (DSP) is called Frosted Floral, and I used Mint
Macaroon as the green for my leaves. 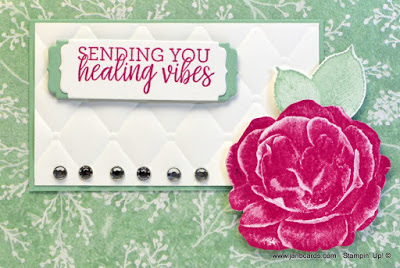 embossed with the Quilted Embossing Folder, which I cut
down to my required size. To put my card together, I
adhered the DSP onto a layer of Whisper White CS layer
and then to the card base of Mint Macaroon. 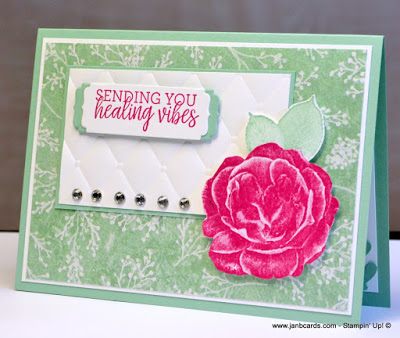 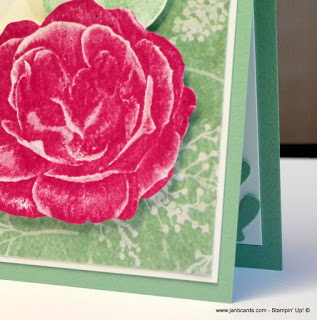 I stamped one large flower, and one set of leaves; next I
fussy-cut both images, which I then adhered using
Dimensionals. I added a row of Basic Rhinestones
along the bottom of the dry embossed layer. Inside the
card I added a layer of Whisper White CS and decorated
the two bottom corners with Mint Macaroon sprigs,
punched with the new Sprig Punch (page 29 – CC). 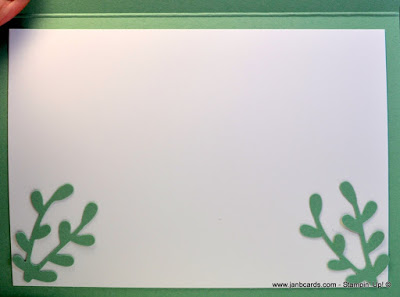 Looking at my card now, I think I would have preferred
the Rhinestones on the actual banner, but not enough to
try to change it! That’s about it from me today.
I hope you have a lovely day, and until tomorrow,
happy crafting.
JanB.
Products Used