Hello, Crafters.
Yesterday I was playing with the Nothing Sweeter Stamp Set,
and the Sweetly Stitched Framelits Die – both available as a
bundle and therefore saving 10%! The tree, heart and gift
are two step stamping, and all have a die to cut them out.
Each of them also has a smaller die that fits inside the outline
die, and puts in stitching around the edge. 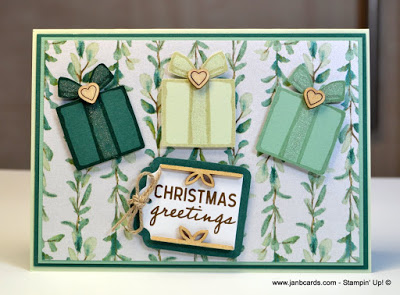 The gift has horizontal lines as in stitches, the tree has
vertical lines that look like dominoes, and the heart has
little crosses on it. All these details offer several variations
as to how this set can be used. The last photograph shows
some of the ideas I came up with when I first started playing!

My first colour choice was Blackberry Bliss, but I decided that
was too dark for the effect I was trying to achieve! I’d stamped
the gift in Blackberry Bliss Ink onto a multi-coloured sheet
from the Frosted Floral Designer Series Paper (DSP). I fussy cut
it – although I could have die cut it, it was such an easy shape
– and then I stamped it again on Blackberry Bliss Cardstock
(CS) and fussy cut just the ribbon and the bow. 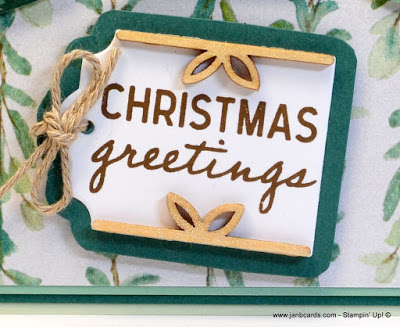 Then I adhered the die cut to the patterned gift, but it was
so dark the stamped details couldn’t be seen. I tried the
same idea again, except in reverse, and with Mint Macaroon.
I thought it looked a lot nicer this way because the detail
on the bow can be seen. The third image in the last
photograph is what the ribbon and bow look like
when fussy cut on their own. 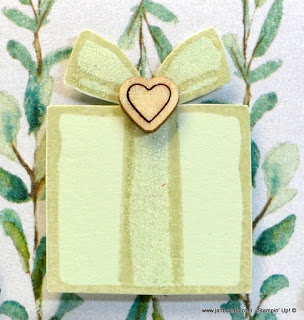 My first thought was, if the bow was cut off, a man’s tie, and
then I thought bow tie with the ribbon cut off! What do you
see? In the end I decided to keep my gifts in three plain
colours – Tranquil Tide, Mint Macaroon, and Soft Sea Foam
– so I could put them on the same DSP I used yesterday. 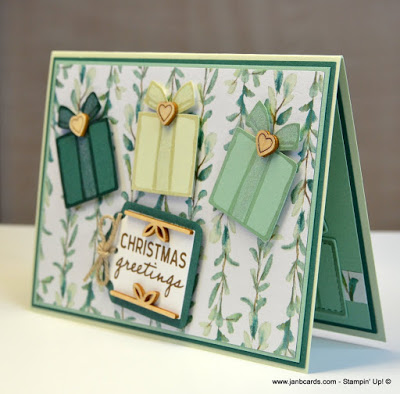 I thought about making one small tag with the sentiment
JUST FOR YOU for each gift, but then I decided I wanted
one larger tag, and chose the CHRISTMAS GREETINGS. I
found a tag-shaped die in the All the Presents Thinlits Dies,
and the size was spot on, but the Whisper White
CS disapeared into the DSP! 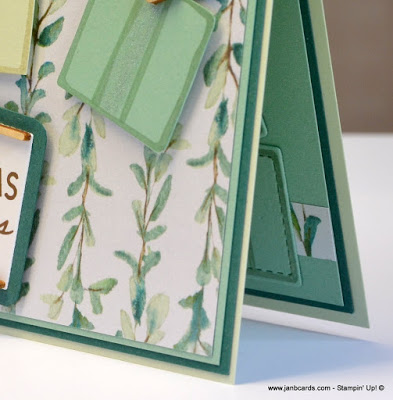 I took a scrap of Tranquil Tide, and drew around the outside

of the tag die. After I fussy cut it I threaded a piece of Soft
Suede Baker’s Twine – to match the stamping – through the
hole and tied it into a bow. I adhered the there trees, and
the tag using Dimensionals. I used some of the wooden
elements from the Frames Elements (page 199) to decorate
the knots on all three bows and the top and bottom
of the sentiment tag. 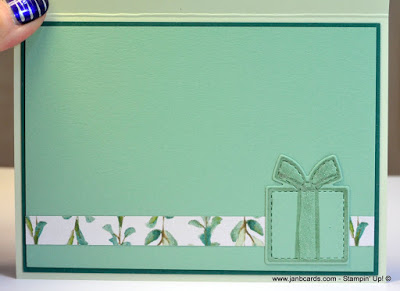 I finished the front of the card by painting all the wooden
elements, plus the bows and the ribbons, using my Clear
Wink of Stella Glitter Pen. To decorate the inside of the card,
I adhered a layer of Tranquil Tide CS, and then a layer of
Mint Macaroon CS. To this I added an half inch strip of the
DSP and then adhered a Mint Macaroon Gift, decorated the
same as the gift on the front of the card, but with the
stitched lines added, and adhered it in the bottom
right-hand corner. 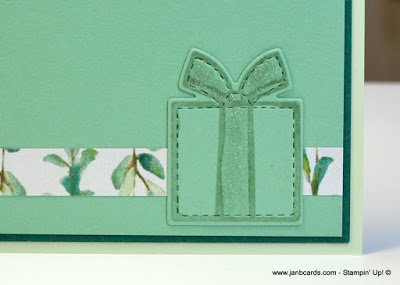 I’m very pleased with my card and used the same design
for a Basic Black and Soft Sea Foam card I made
yesterday for a challenge card. The challenge has been
started by a lady in my Super Stars team and is being
called Karen’s Saturday Challenge! We’ll be sharing our cards
tomorrow, and I’ll be sharing mine with you on Monday morning! 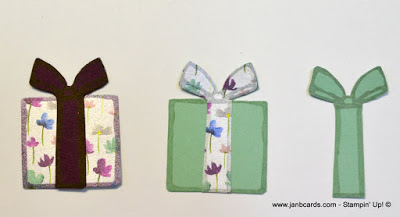 I suppose these first two are paper-piecing, which is one
of my favourite techniques!
I hope you have a great weekend whatever you are planning to do.
Until tomorrow, happy crafting.
JanB.