Hello, Crafters.
I hope you had a beautifully relaxing weekend. Saturday
week ago one of the ladies in my team set a challenge for
us all, and we were to share our cards on Saturday! For
some inexplicable reason, there was much confusion about
when the challenge started, when it ended, and what we
were expected to be doing. At one stage it all became so
confused, it was absolutely hilarious! 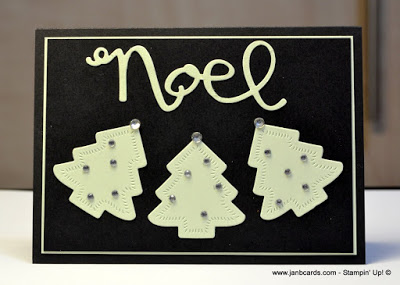 I think we are all singing from the same song sheet now,
and everyone is geared up for this week’s challenge which
we have to share this coming Saturday. Today’s card is
my card for last Saturday’s challenge which was Basic
Black and Soft Sea Foam (or Mint Macaroon)! I started with
a top layer of Basic Black Cardstock (CS), with a layer of
Soft Sea Foam CS, and a Basic Black CS card base.

I had just finished Friday’s card, which was the three gifts
using the Nothing Sweeter Stamp set and the Sweetly
Stitched Dies. I decided I’d do something similar using the
Christmas Tree, and die cut them without stamping them. 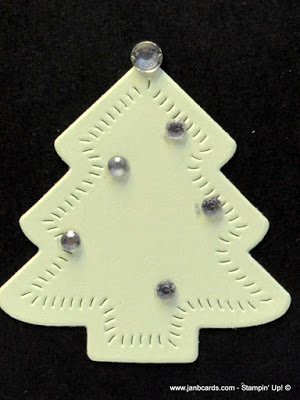 If you didn’t understand what I meant when I wrote on my
blog on Friday “The gift has horizontal lines as in stitches,
the tree has vertical lines that look like dominoes, and the
heart has little crosses on it” you can see on today’s card
the stitching on the trees that looks like dominoes! LOL! 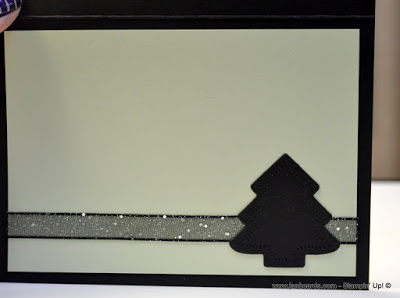 I added some Basic Rhinestones to the trees,and painted the
NOEL using my Clear Wink of Stella Glitter Pen. To decorate
the inside of the card I took a layer of Soft Sea Foam CS
and wrapped a strip of the fabulous black sparkly ribbon
that’s available in the Christmas Catalogue – called Black
3/8″ Glittered Organdy Ribbon (page 49) – about an inch up
from the bottom. I die cut a Christmas Tree in Basic Black
CS, and adhered it over the ribbon on the right-hand side. 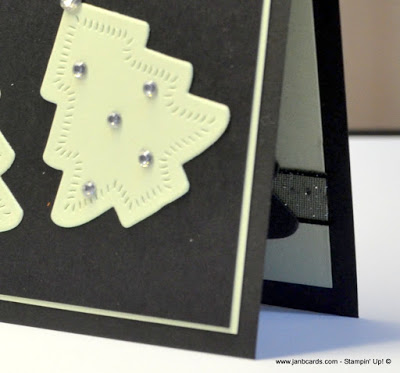 If you watched my Craft Studio Tour video, you will know
that I had some more pen trays on order for my Stampin’
Blends. I ordered six trays so I would have room to store
the pens I already have, and would have room for new
ones as I gradually add to my collection. When my pen trays
arrived, I’d been sent black trays but I’d ordered Clear. To
cut a long story short, my clear trays arrived on Saturday, so
I set to organising my colours the same way as I do my inks. 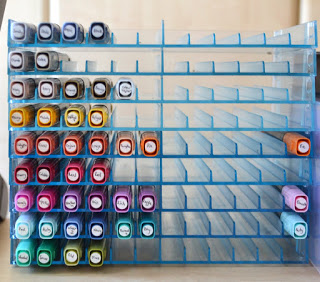 That is, all the greens together, all the blues together, all the
pinks together etc. But this still left the problem of not
being able to identify the exact colours, nor the light and
dark! I mentioned to hubby that I find my pens frustrating
because I have to keep pulling the pens out and reading
the labels to find out what’s what! He suggested that I
numbered them on the end caps! 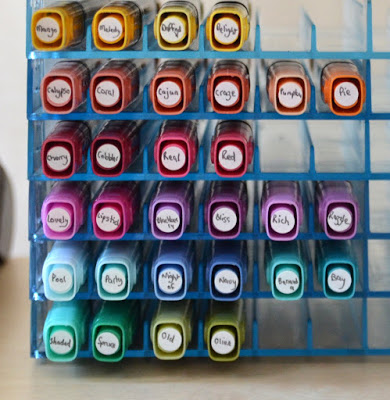 At that moment, the lights went on, and I knew exactly what
I was going to do! First I put the colours in the correct pairs,
light on the left and dark on the right. I also made sure the
colour names were facing up (toward the ceiling)
and pointing towards me. 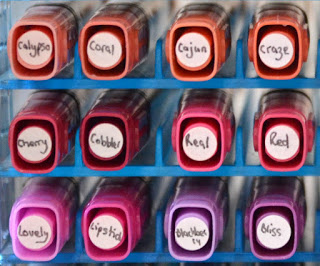 I took some white self-adhesive circles that fitted on the
pen caps exactly and wrote the first name e.g. CRUMB
on one circle and CAKE on the second circle. Then I
ahered CRUMB to the light pen and CAKE to the dark
pen. I did this for all the pens I have. There will
probably be times when colours won’t co-operate with
my system e.g. if we ever have PETAL PINK
and POWDER PINK 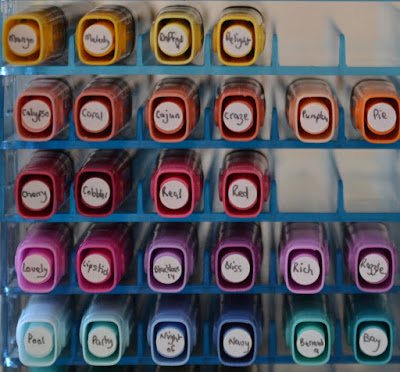 I hope this has given you some food for thought!
That’s about it from me today, so until
tomorrow, happy crafting.
JanB.