I hope you’re all having a good week! The card I’m sharing today was inspired by a card which was made by a lady in my team.  Amanda’s card was inspired by my all white card I shared here two days ago! The only colour on Amanda’s card was the Tranquil Tide Joyous Noel Glimmer Paper which she used for the bauble, which was from the Detailed Baubles Thinlits. She had also made some “rhinestones” using the same Glimmer Paper and had scattered them around the doily-like circle. It was gorgeous! 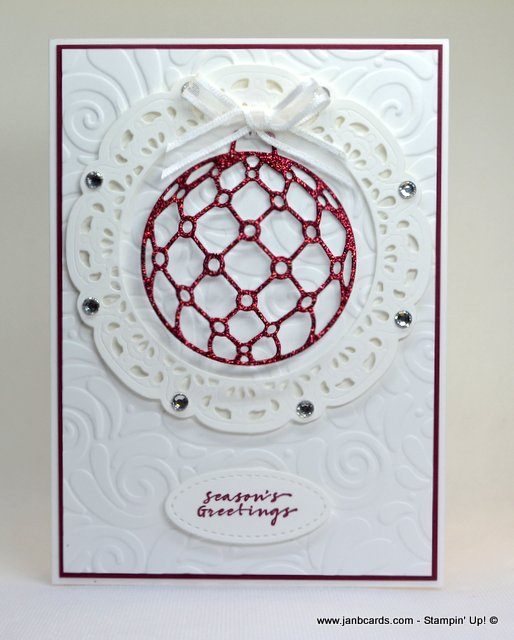 To create my card I used the Merry Merlot Joyous Noel Glimmer Paper for the same bauble Amanda used for her card. I also used Merry Merlot Cardstock (CS) for the sentiment, and the layer sheet under the top Whisper White (CS) layer. I also stamped the sentiment using Merry Merlot Ink.

I used the Swirls and Curls Embossing Folder to give the top layer dimension. This was the first time I used this folder, and it produced some very small tears in my cardstock. This is a problem I often have with embossding folders! To cure this problem, I adhere two pieces of our Vellum CS, the same size as the embossing folder inside, one on each side. I embossed another top layer and it worked brilliantly. That’s a really top tip I picked up from France Martin aka Frenchie. 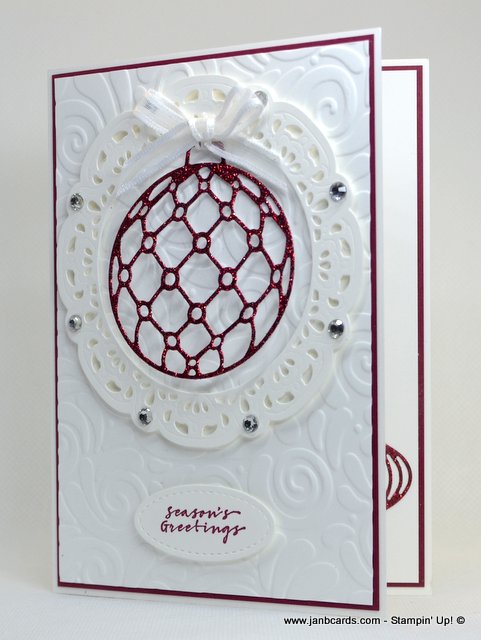 I adhered the doily circle using several small pieces of Dimensionals to make sure it had plenty of support! Then I attached the bauble by the hanger using Baker’s Twine, so the bauble is “floating” – just something different! I added Rhinestones around the edge of the doily, and a white bow at the top of the bauble. 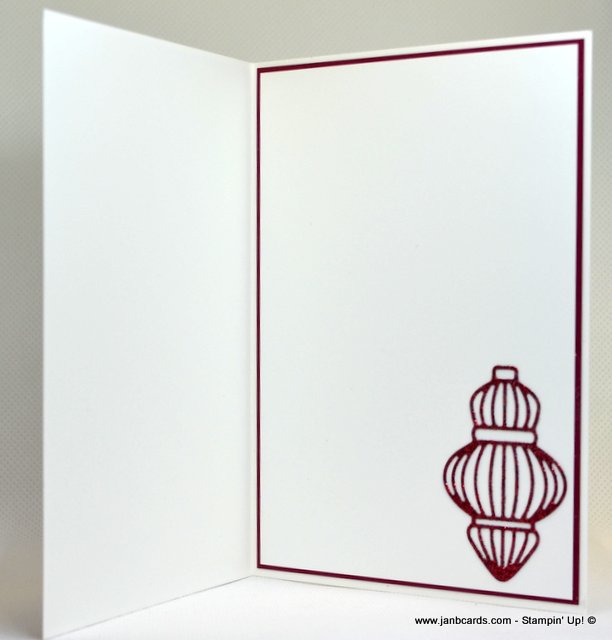 I chose the sentiment from the Wishing You Well Stamp Set, and die cut it using the smallest oval Stitched Shapes Framelits. I adhered it using Dimensionals. To decorate the inside of the card, I added a layer of Merry Merlot CS first and then a layer of Whisper White CS. My final touch was to add another bauble from the Detailed Baubles Thinlits Dies I had die cut using more of the Merry Merlot Glimmer Paper.

Many thanks to Amanda for the inspiration! I think that’s about it from me, so until tomorrow, happy crafting.