It’s the weekend and today I’m off to the Women’s Convention in London today, with a group of ladies from our Church. It’s the first time I’ve been, and probably the last considering what time I had to get up this morning! LOL! Hubby’s travelling into London with me, then he’s visiting all his old haunts accompanied by his new camera! We’re meeting up once my Convention has finished, and we’ll have a wander around together because we’ll be near a part of London where I used to work. Then we’ll get a bite to eat before making our way back home! 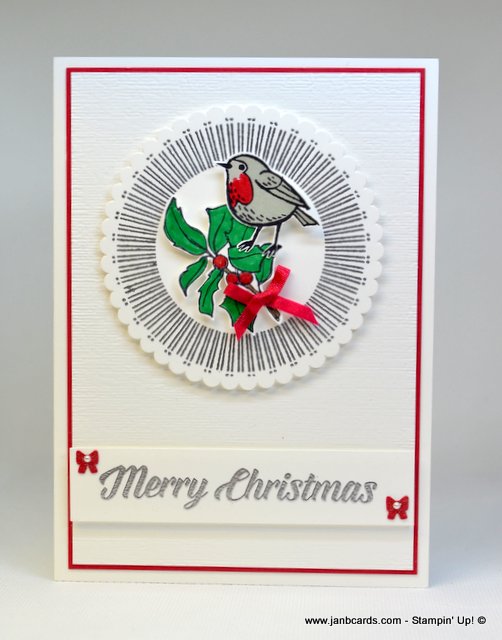 I’m not sure what inspired my card today, but I’m pleased with the result! I started with the holly from the Timeless Tidings Stamp Set. After I had stamped and coloured four images, I fussy cut two of them! I tried arranging the holly on an oval that had been die cut using the Stitched Shapes Framelits Dies. The result didn’t rock my boat, so I looked around for something else I could use!

I found a great circle in the Bouquet Blooms Stamp Set. I heat embossed it with Silver Embossing Powder, and die cut it using the largest scalloped circle die in the Layering Circles Framelits Dies. Then I decided the holly on it’s own looked incomplete. I stamped three birds from the Feathers & Frost Stamp Set, painted them with Sahara Sand and Real Red Marker Pens. Next I fussy cut the bird, and adhered on the holly, on the circle, using Dimensionals. 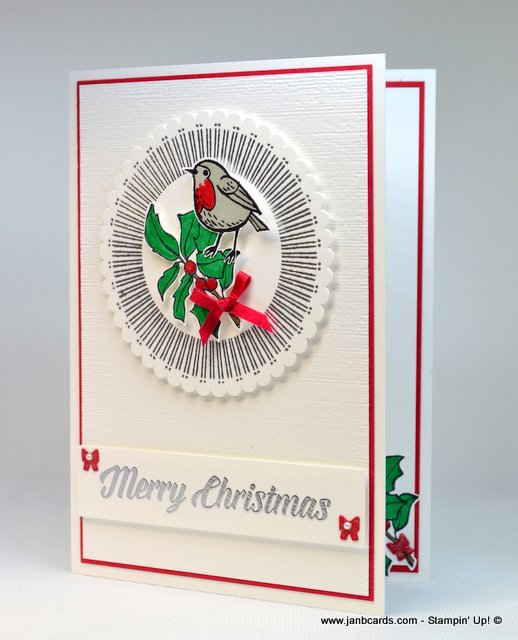 I chose the MERRY CHRISTMAS sentiment from the Timeless Tidings Stamp Set, and heat embossed it with Silver Embossing Powder. I trimmed the strip of Whisper White Cardstock (CS) to fit across the top layer perfectly. Next I adhered the Real Red CS layer to the Whisper White CS card base. I used the Subtle Dynamic Embossing Folder to dry emboss the top layer. After I had adhered this layer to my card base, I added the circle, as well as the sentiment, using Dimensionals. 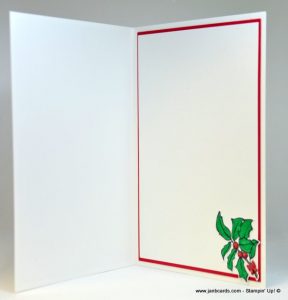 I finished my card by adding a layer of Real Red CS and a top layer of Whisper White CS inside the card. Finally, I added more holly inside the card in the bottom right-hand corner. As I said earlier, a satisfying result.

Whatever your plans are for the weekend, I hope it’s a great time. That’s it from me today, and until tomorrow, happy crafting.