I hope you’ve had a lovely weekend, and are looking forward to a fresh new week. When I was trying to decide which stamp set to use for today’s card, I realised I hadn’t photocopied the fronts of all of them. The only way I could find out which ones were missing was to check the shelves with my reference file. I was staggered when I found there were ELEVEN stamp sets I hadn’t photocopied! This is a job on my list of tasks for today! 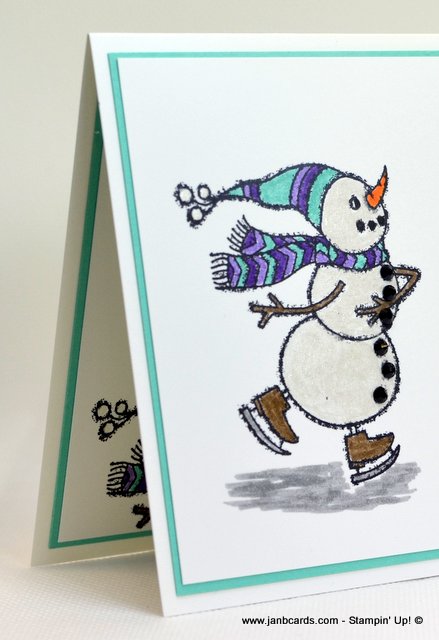 The Spirited Snoman is the stamp set that made me realise something was amiss. When I used this stamp set previously, I hadn’t noticed that it wasn’t in my Reference File! The really strange thing about all this, is that out of eleven stamp sets there is only one that I haven’t used yet! LOL! 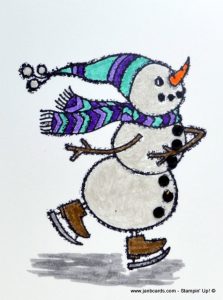 I was inspired to make today’s card when I saw a card on Facebook made by Sandra Moore. Sandra had used the stamp that has six different baubles in the Beautiful Baubles Stamp Set. She stamped the image on the left-hand side of a Whisper White Cardstock (CS) square card base. She had stamped it in the centre so she had an equal gap on the left, top, and bottom edges. On the right-hand side Sandra had stamped the sentiment. There were three cards in her photograph, and on each card all the baubles had been coloured the same. Those three colours were Highland Heather, Bermuda Bay, and Real Red. They were stunning! 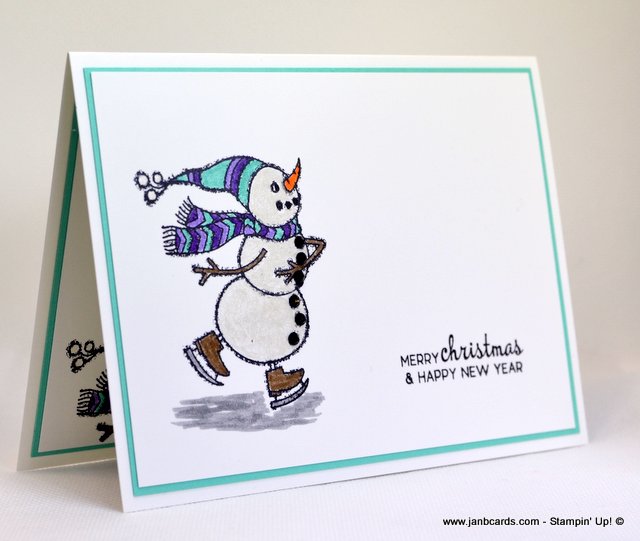 I chose the skating snowman for my image, and used an A6 (A2) card base horizontally. I found it very difficult to leave the background “plain”, but I resisted, and I’m glad I did! I think it was this starkness that contributed to Sandra’s stunning card. The colours I used for my snowman are Coastal Cabana, Highland Heather, and Gorgeous Grape. I used a layer of Coastal Cabana CS between the top Whisper White CS top layer and the card base. Personally I don’t have a preference for colours for Christmas; I like traditional and non-traditional. 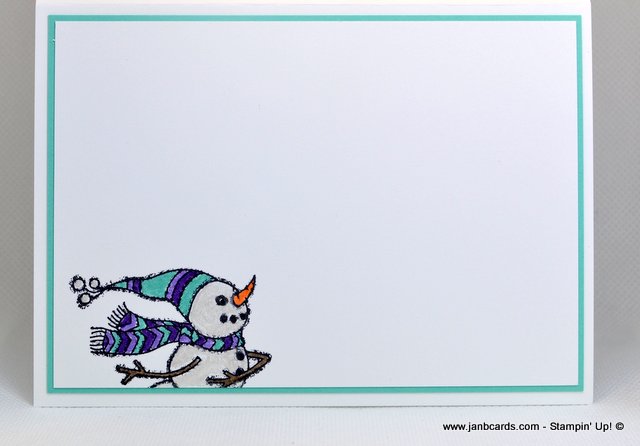 I painted the snowman’s body with the Frost White Shimmer Paint, which gives a brilliant silvery white effect. The only challenge I had with this image was the “fluffy” edges. I found that the Shimmer paint covered some of the fluff around the mouth and buttons. I used some black Faceted Dots to remedy this on the buttons, and I used a Journalling Pen to colour the mouth stones, which worked well!  I used the same sentiment from the Beautiful Baubles that Sandra had used for her card.

I added a layer of Coastal Cabana CS and Whisper White CS inside the card. Using Stazon Jet Black Ink, I stamped the head and shoulders of the snowman in the bottom left-hand corner, and coloured him the same as the main image. I coloured his buttons with my black Journalling Pen. I keep looking at the large expanse of blank card and thinking maybe I should put something in there. What do you think? Is it too sparse?  I think that’s about it for today. Until tomorrow, happy crafting.