Yesterday evening Stampin’ Up! announced the names of the top achievers for last year, globally, and in each of the individual countries. I was blown away to find out that a lady in my team made it into the top 50 in the UK. Maire has been a demo for two and a half years, but only seriously for the last eighteen months. She has worked hard and deserves this recognition. Out of all the successes announced yesterday evening, this is the one that thrilled me the most. Well done, Maire – I’m so very proud of you! I made it to number 7 in the UK, which is up from no. 15 last year. 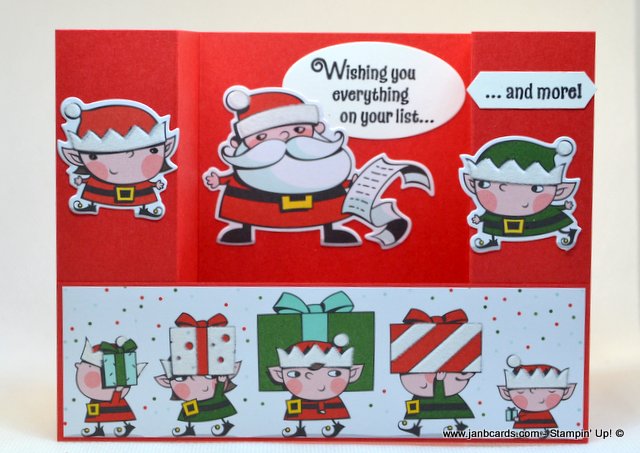 This is the first year that Stampin’ Up! have announced these results by video, it’s normally part of the OnStage Convention. There was a bit of concern when it was first announced that it would lose a lot of the impact by doing it this new way. Personally, I think yesterday evening was far more exciting becuase it was more intimate. My team leader organised an online party, and there were congratulation messages pinging back and forth on Facebook! It was a brilliant evening! It’ll be interesting to find out what other demos feel.

Today’s card is my first bridge card which, like a lot of fun fold cards, is amazingly easy to make. I found the template on Pinterest, and followed the measurements as quoted. Next time, I would like to tweak them a little bit, but I’m not sure the scope is there, especially if it’s to fit inside one of our envelopes. It’s something I’m going to have a think about!

The only stamping I’ve done on this card is the sentiment, which is from the Signs of Santa Stamp Set. All the images I’ve used are from Santa’s Workshop Specialty Designer Series Paper (DSP) . I was amazed to find the image of the five elves fitted the “bridge” perfectly! The Santa, and the two elves’ images were die cut from the DSP using the Santa Signpost Framelits Dies. The die for Mrs Claus also fits her image on this DSP. I haven’t checked the other dies to see if they have images on the DSP. In case you haven’t seen a bridge card before, yes, it does fold flat to go into an envelope.

I think that’s about it from me today, and I look forward to be back with you tomorrow. In the meantime, happy crafting.