I hope you’re enjoying your weekend. Well, I did it! I’ve had my nails painted black, with a layer of black sparkle and finished off with my “animal print” stripes in white! Sharon kept the lines soft and light, rather than than hard and bright white, and they look great! In case you missed yesterday’s post, I’ve had my nails painted in black and white because that’s the dress code for CentreStage this coming Fiday! 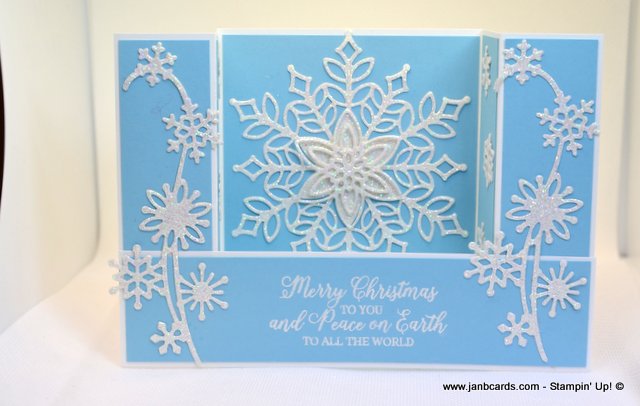 After sharing my Santa’s Workshop Bridge Card with you a couple of days ago, I decided to make a video showing how this fancy fold is made. Like so many other fancy fold cards, it’s amazingly easy. I’ve used two products that are available during the Stampin’ Up! November Promotion called the Snowflake Showcase. I used one of the stamp sets called Snow is Glistening for the sentiment which has been heat embossed with White Embossing Powder. I also used the co-ordinating dies called Snowfall Thinlits Dies. The card I made before the video is in Balmy Blue, see above – and the video card is in Pool Party, see below. 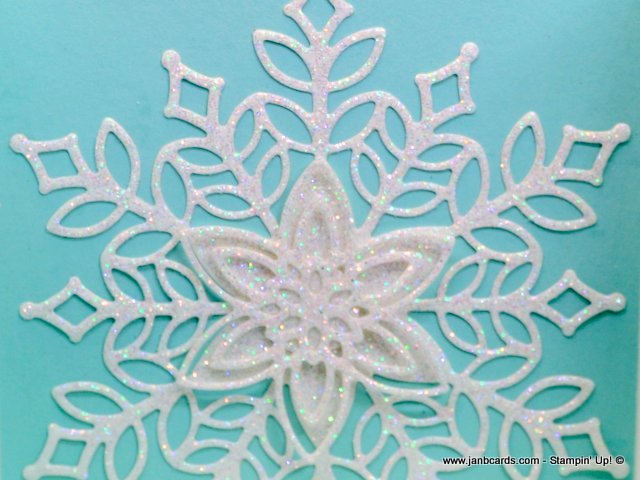 To die cut the snowflakes, I used my Precision Base, which is fantastic addition to the Big Shot, especially when die cutting Glimmer Paper, but it does warp the cutting mat. When I was making the video my very warped plate made a really loud cracking noise as I cranked it through the Big Shot, and it made me jump out of my skin! I wasn’t sure whether to stop recording – in case the crack noise was really loud on the video – or to carry on. I decided to carry on, and afterwards, when I checked my video, the noise was nowhere near as bad as it was in real life, so you’ll get to hear it. One special note about die cutting on Glimmer Paper! You may hear some crafters say that it’s easier to die cut Glimmer paper on the reverse side. Whilst this is true, it’s much better to die cut from the front because the edges will be beautifully “rounded”, whereas if you die cut from the back, your die cuts will look very flat, and will have “square” edges!

I hope you enjoy today’s project, I’m sure you’ll agree it’s amazingly easy! I wish you a very blessed Sunday, and until tomorrow, happy crafting.