Hubby went back to work yesterday, so I started back in my routine of going for a walk every day. Although it was a bit chilly, I had a warm jacket on which has a hood, to keep me cosy. It was just as well, because it started raining quite heavily before I made it back to the house! It could have been worse, it could have started raining on my way out! LOL! 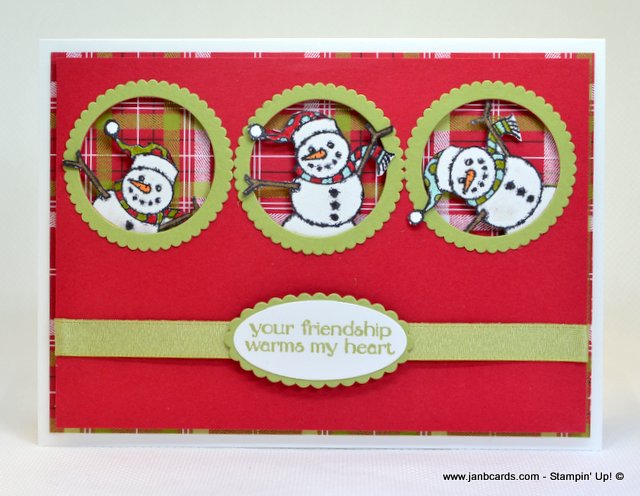 I have made a card similar to today’s card a couple of years ago, but it wasn’t a Christmas card, and I think the images were rabbits. I was reminded about my previous card when I saw a similar card yesterday. It had been made by one of my Facebook friends, and featured pandas from my favourite stamp set from  the 2018 Sale-a-bration.

My plan was to stamp three of the somersaulting snowman, and adhere them behind die cut circles on the top layer. I changed my mind and decided to fussy cut them so I could use the tartan Designer Series Paper from Under the Mistletoe as a background. As usual, I gave all three snowmen open eyes!

After I had positioned the snowmen to make them all look slightly different, I wanted to wrap some ribbon around the bottom half of the Real Red CS layer. I have always felt that Pear Pizzazz mixes really well with Old Olive, which worked out well for me in this instance, as I didn’t have any Old Olive ribbon. As I have Pear Pizzazz Glimmer Ribbon, I decided to use it. I also used Pear Pizzazz Ink for the sentiment,  as well as Pear Pizzazz Cardstock for the scalloped frame around each snowman, and around the the sentiment. To finish the inside of my card I stamped another snowman and coloured him in using Marker Pens. A happy, fun card, I think! 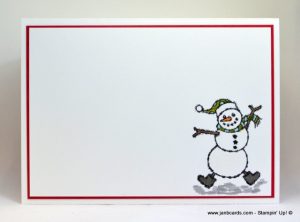 Products Used: click on any image and you will be taken to my 24/7 Online Stampin’ Up! shop.