With all the problems I had yesterday with trying to schedule my blog for today, I found my blog that should have published on 9th December 2018! At that time, I didn’t know that – on rare occasions – WordPress does a “MISSED SCHEDULE”! When it happened on Thursday morning, it was the first time! I now know I must check each morning to make sure my post has posted!!

Anyway, I decided to share the Christmas post with you because it’s a nice story, and full of happy memories!

I hope you’re having a great weekend. Today’s video shows how I made the 3D star card I shared on Thursday. I was asked to make a video showing how it’s made, but it did mean I had to do a lot of practising to find out how to get neat ends for the tips of the starlight “beams”. During this time I found out a couple of things. First is that when I was scoring on the score marks created by the die, it was wrong to score from end to end. This was causing the fibres in the cardstock to break in such a way that I couldn’t get neat tips. I found if I started a quarter of an inch in from the tip, and stopped a quarter of an inch from the opposite tip, I could do it. Although it looked as if it was very time-consuming in the video, it was exaggerated so that crafters could really appreciate what I was saying and doing. In actual fact, once you start using this technique, it gets a lot faster!

The second discovery I made was that if I used my Embossing Mats, I could made the stars embosed with dots – a very pleasing look. This discovery came about because I wondered if the Embossing Mats would make the score lines more prominent! They don’t, but they do emboss the dots! Both the neat tips and the embossed dots can be seen in the photograph below………….just about! 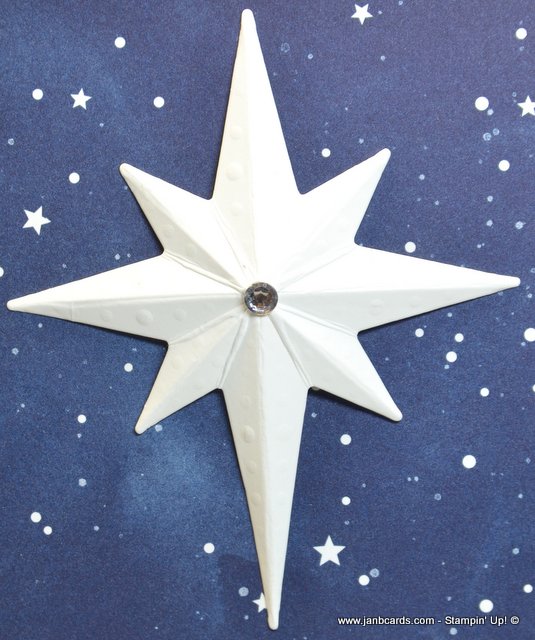 While I was busy with my 3D star, hubby decided to get the Christmas decorations down from the loft! He has been at home since Thursday, using up the last of his annual leave. I left him with the decorations, and to be perfectly honest, he was so quiet, I forgot that he was decorating the house! When I decided to take a break, I went downstairs for a cup of tea, and I was bowled over with what he had done! 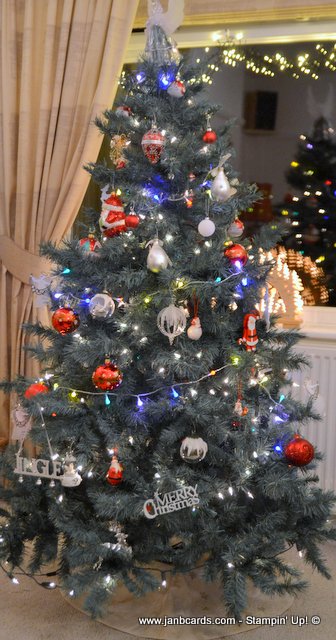 Whilst he didn’t decorate the tree how I normally do, nor had he used any of my hand made decorations – brave or foolish? LOL! – he had made a great job of the tree. It looked fabulous. Since then he’s been adding extra bits, and I just had to photograph his handiwork, and share it with you! The first photograph is the (artificial) Christmas tree. We always buy Christmas decorations wherever we travel around the world. For example, we bought the wooden, lighted Nativity scene that’s sitting on the window sill, from the Christmas market in Berlin. 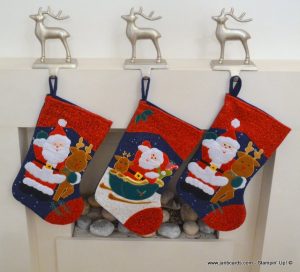 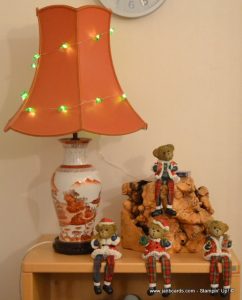 I don’t remember why we have three stockings but nowadays, they’re just for decoration purposes only! LOL!  The lights wrapped around the lampshade are green holly leaves, with red berries. The four teddies have pottery heads and very floppy legs – they’re just so sweet! 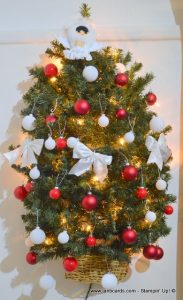 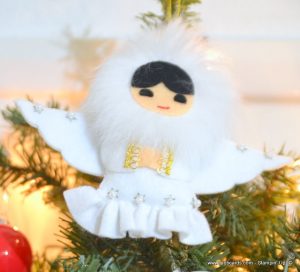 This is a flat-back Christmas tree that was made to be hung on a wall. Hubby has made any excellent job of decorating, albeit the wrong way round! He put the baubles on first, and then thought about putting lights on it. Instead of taking the baubles off and starting again, he added the lights from the back! Genius! The “fairy ” on the top of this tree is an Eskimo angel, we bought when we were in Alaska in July.

There were some white bows leftover, so he added them to our wooden XMAS, which is sitting on top of the curved wooden mirror in our dining room! We bought the letters when we visited the Christmas market in Copenhagen. There are several other bits and pieces of decoration around the house but not in a position where I can actually get to photograph them. The floor space in the downstairs of our house looks like a cardboard box graveyard! LOL! I hope you’ve enjoyed seeing hubby’s Christmas handiwork. I think he’s done an excellent job, and just had to share with you.

I wish you a very blessed Sunday, and look forward to being back with you tomorrow. Happy crafting.