I recently said one of my fancy fold cards videos was the biggest challenge I have ever had! I’ve just had an even bigger challenge over the past couple of days! It’s our granddaughter Molly’s 15th birthday on 31st December 2018, and I was looking for something special for her card. I chose a pull up card as I’ve never made one before, and it looked easy enough! I couldn’t have been more wrong! 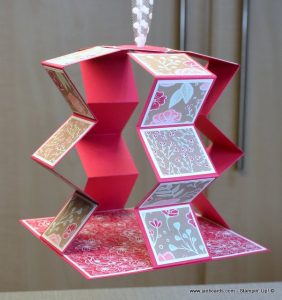 Molly’s Birthday card – to be completed

After checking a few videos on YouTube, I decided to have a go because it looked really easy!! Unfortunately some of the videos I watched had been speeded up and/or edited! After a while I had decided that I’d spent so much time looking into how these cards are made, that there was no turning back. As usual, I’m so pleased I persevered! 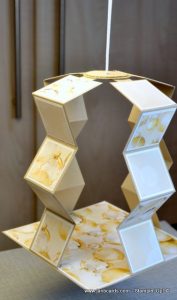 The problem with this card, it was like working with a four-armed octopus! Once I’d found a way of keeping the arms under control, it was much easier to concentrate on fitting the crossbars. I had to make three cards before I was happy that I could make a video. The only card I had completed at the time of making the video was Santa’s Workshop, which was my first card – see below. 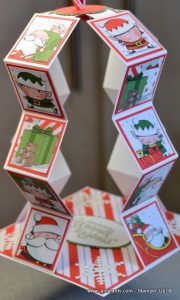 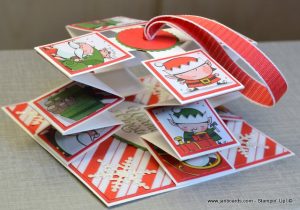 After that I decided to concentrate on making the actual card. While the video was uploading to YouTube, I finished the All is Bright Designer Series Paper (DSP) card. I have left the golden baubles card because I think I’ll save that as a wedding card for someone. To make the card in the video, I used a new DSP that will be available when the new Spring/Summer catalogue goes live on 3rd. January 2019. I’ll be decorating it specially for Molly.

I hope you enjoy today’s video. It was a challenge,which I thoroughly enjoyed getting to grips with! That’s it from me today. Happy Wednesday, and until tomorrow happy crafting.