Yesterday, I was preparing to video Sunday’s tutorial, and I decided to include using the Embossing Mats. I’d bought them in June, but hadn’t used them! The result was amazing, so I decided to use them for today’s card, too. I CASE’d the design from a card in the Christmas Catalogue. I used the doily-like die on the top layer, and then I put it back through the Big Shot with the Embossing Mats. The result is brilliant, there’s so much detail! I really wish I’d started using them sooner! 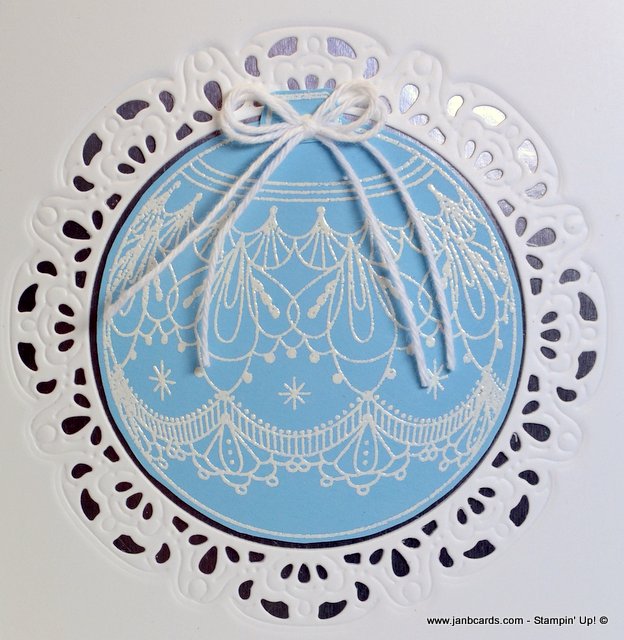 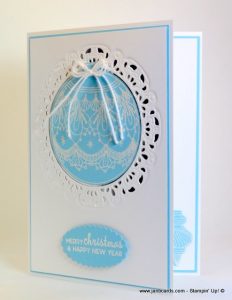 I assembled my card starting with a Whisper White CS base, then a layer of Balmy Blue, ca, then a layer of Silver Foil – this is only visible through the cut outs in the doily – then the top Whisper White doily layer. The bauble circle was a bit small for the cardstock circle, so I trimmed around the edge. I adhered it inside the doily circle, which left a very slim edging of Silver Foil all round. I adhered the extra cap I’d made in the correct position which meant it overlapped the Whisper White Doily. I liked the effect. 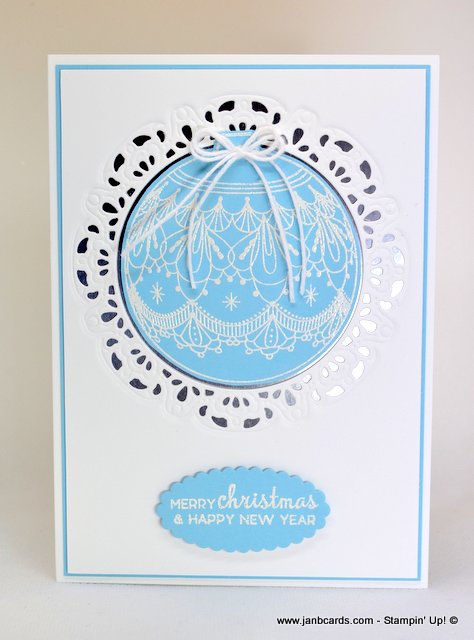 Next I took some more scraps of Balmy Blue CS, and on one piece I stamped the sentiment in Versamark, and on the other I stamped the six baubles, also in Versamark. Next I heat embossed both in White Embossing Powder. I die cut the baubles, and I used a scalloped oval die to cut out the sentiment. I played with different arrangements using the six baubles. One idea I toyed with was to have three of them on the front of the card. Eventually I decided against that idea, and adhered them all on the inside of the card. I finished the front of the card with a double bow, tied in Whisper White Baker’s Twine. I’m really pleased with the effect the Embossing Mats give, and I must use them again……….soon……………very soon!

I hope you have a lovely relaxing weekend whatever you’re planning to do. That’s about it from me today, so until tomorrow, happy crafting!

Products used: click on link to be taken to my 24/7 Online Stampin’ Up! Shop.