This is the last full weeek, before we can enjoy celebrating Christmas, and the birth of Jesus! At Church yesterday, the children put on their Nativity, and they told the story as if it was happening today! One young girl, about 10 years old, sung a solo, and her voice was amazing! While the Sunday school teacher narrated the story, the children acted, sang and danced for about an hour. It was absolutely brilliant. 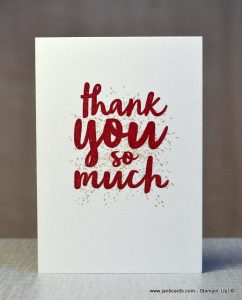 #simplestamping Card 1. One sentiment and one background

When I started crafting yesterday, I decided to have another attempt at #simplestamping in response to the challenge we were given by Stampin’ Up! when we were at OnStage. The reason behind the challenge is so we remember to teach beginners by starting with simple cards and building up as their skills and confidence grows. 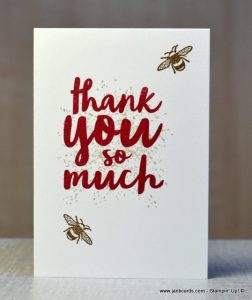 #simplestamping Card 1. One sentiment, one background, one extra element

I decided that the only card I’m happy do as a single layer is Thank You cards. So I chose the Thankful Thoughts Stamp Set for the sentiment, and the Touches of Textures Stamp Set for everything thing else. I started the first card using Crumb Cake for the background stamp, and then I stamped the sentiment on top using Cherry Cobbler Ink. I stopped there and this is my first #simplestamping card. I made a second card using the same theme but I changed the colours. I chose Tranquil Tide for the sentiment. Next I stamped three small flowers using Berry Burst Ink. 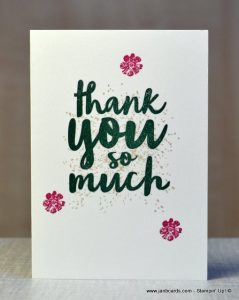 #simplestamping Card 2. One sentiment, one background, one extra element

Once I had finished my second card, I made another one, but then added my spin on it! I stamped a bee, and painted him using the Crushed Curry Marker Pen. Next I painted over the wings with my Wink of Stella Clear Glitter Pen. As  I had used the Soft Suede Ink for the bee, the colour bled and made the wings look a very pale yellow, not what I had intended but I do like the look. The final addition to my card was a small Basic Pearl in the centre of each of the three flowers! 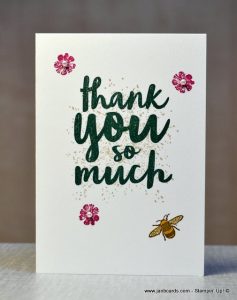 Card 2 but not #simplestamping any longer. Added the bee, painted with Wink of Stella, added small pearls into flowers!

A very successful crafting session I think! That’s it from me today, and I look forward to being back with you tomorrow. In the meantime, happy crafting.