The guy from the conservatory company, Paul, arrived at 8.15 am yesterday. His journey should have taken about an hour, but he encountered a few problems on the motorways, and eventually arrived two and a half hours after leaving home! He didn’t allow his frustration to get the better of him, and was very friendly, and chatty! He’d completed the job within half an hour, explained what he’d done, what had caused the problem, and was on his way to his next call. Less than fifteen minutes later there was another knock on the door. I thought maybe Paul had left something behind. I opened the front door to be met by another man, who said he was from the conservatory company! 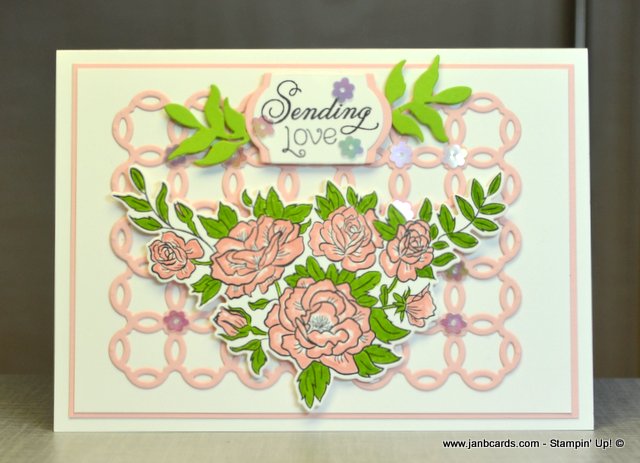 Needless to say I was surprised and I said “Oh! He’s already been!” His shoulders dropped and he gave a very big sigh……you know the feeling! He asked me if the leak had been fixed, and then apologised for troubling me. I assured him it was no trouble and told him I hoped his day improved! I really count my blessings that I work from home! 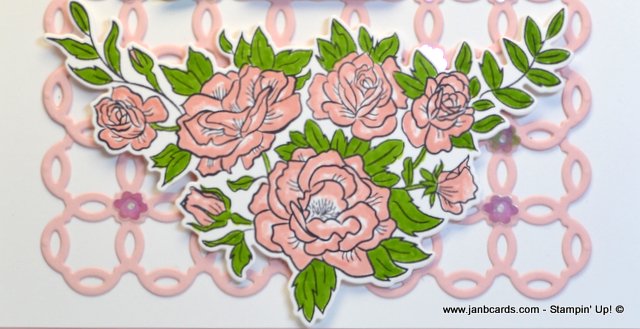 I loved working on today’s card. I used the Climbing Roses Stamp Set, and the co-ordinating Rose Trellis Thinlits Dies (page 9 Spring/Summer catalogue). If you buy these as a bundle, you’ll say 10%. And if you add a bottle of Tombow, you’d be able to choose a gift from the Sale-a-bration Brochure. My colour scheme is Powder Pink and Granny Apple Green. I used Marker Pens to colour the images. I did make one addition after I had photographed the card. It was something I’d thought about while I was making the card, but dismissed the idea! That is, I painted the centre of the largest rose using my Crushed Curry Marker Pen. It’s such a small detail but has made a big difference. 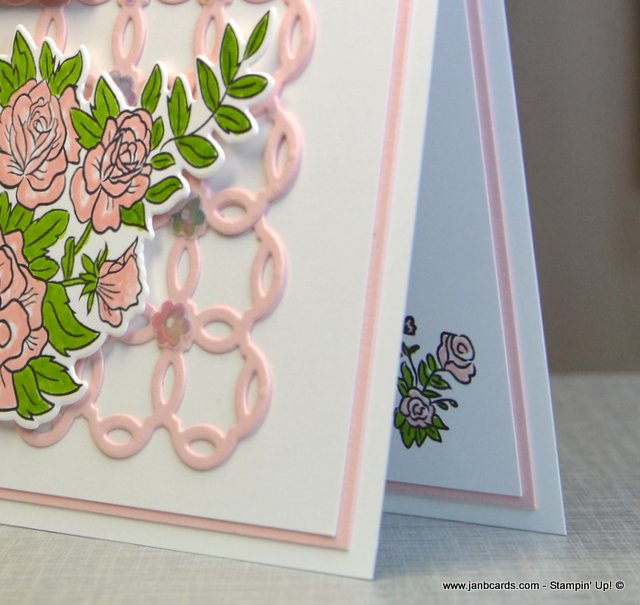 The size of the Powder Pink lattice behind the roses and the sentiment, is 7 “circles” by 3 “circles”. I die cut two identical pieces, and adhered one layer onto another layer before adhering it to my Whisper White Cardstock (CS) layer. I did consider cutting one row of the circles off, but I decided overlapping the layers would probably be tidier and easier. I chose a die from the Bottles and Bubbles Framelits Dies for the sentiment because the one in the set is too large for the way I have positioned my image. I also die cut a piece of Powder Pink CS as well. I cut this in half and layered it underneath the sentiment. The “bling” I’ve added to the front of the card is from the Gingham Gala Adhesive-backed Sequins (page 35 Spring/Summer Catalogue). Half of the sequins in the pack ae round and the other half are flowers. Do check these out, they’re gorgeous! 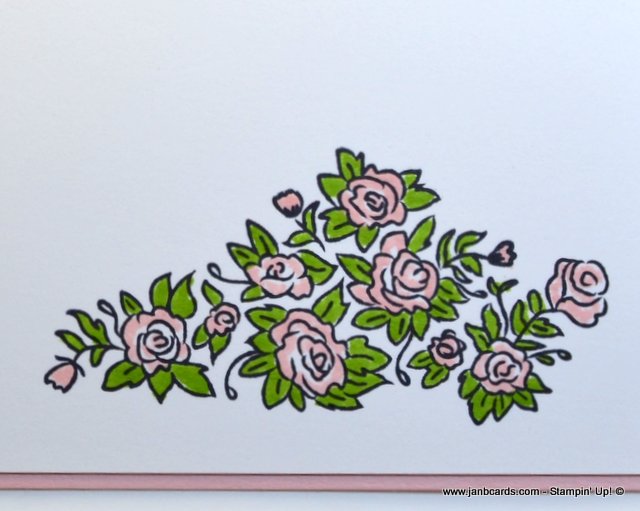 I decorated the inside of the card with a layer of Powder Pink CS and a layer of Whisper White CS. Next I stamped one of the rose images and coloured it in the same way I did the main image on the front of the card. As I said at the beginning, I thoroughly enjoyed making this card, and am very happy with the result.

This morning I’m off to Epsom to go to the bank. They’ve made a mistake on one of my accounts, and I’ve tried getting it sorted out by phone, but I’ve hit a brick wall! While I’m out I might treat myself to a little wander around Marks & Spencers and Next! YAY! That’s about it from me today, so until tomorrow, happy crafting.

Products used: please click on any image to go to my 24/7 online Stampin’ Up! shop.