After hubby saw yesterday’s card, he said I ought to make a video to demonstrate what I was explaining. Before starting on the video, I made two cards using the die cuts I’d made from the torn embossed cardstock. I wanted to demonstrate how you can use the pieces that have been rescued! The first card I made is the Whisper White Cardstock (CS) card base with Real Red CS. I put the Crumb Cake CS back through the Big Shot with the die in place. This cut the cogs beautifully, and the torn pieces popped out automatically when I took the die cut out of the die! I adhered the negative to a layer of Real Red CS, and then adhered the cogs back into the negative place. 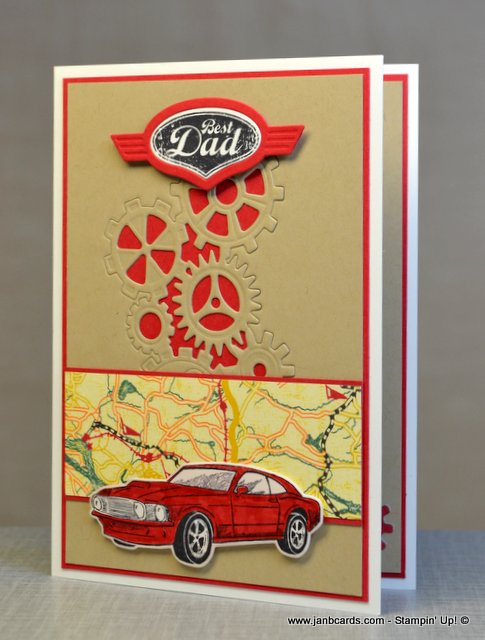 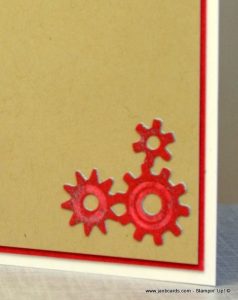 I repeated the process with the second piece of torn embossing Crumb Cake CS. Instead of adhering this back into the negative space, I adhered it on top of a new layer of Crumb Cake CS, i.e. tone on tone. I made a couple more changes as I was finishing off this card. Rather than stamping and painting a car for the front of the card, I die cut one from the Classic Garage 6″ x 6″ Designer Series Paper (DSP)! I’m not happy using Dimensionals on die cuts made with DSP, so I die cut a car from Basic Black CS, and adhered the two together! This idea worked really well. Another change I made was to make this an easel card. 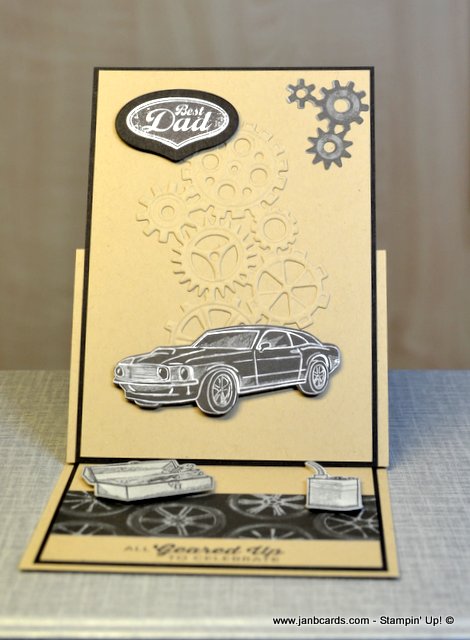 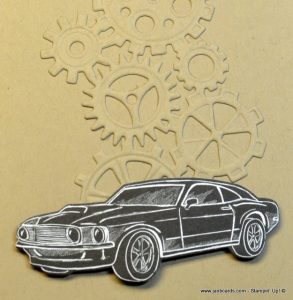 When I had made these two cards I was ready to start videoing. I kept the design quite close to the design of yesterday’s card, with the biggest change being the colour. Instead of Shaded Spruce I used Crushed Curry. I’m very conscious when I’m making masculine cards that hubby doesn’t like seeing them dark and dreary! The changes I made in the video were definitely for the better! I’m really pleased with the result. 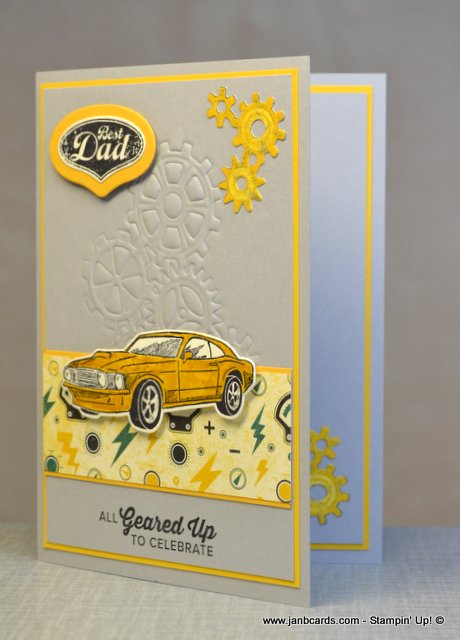 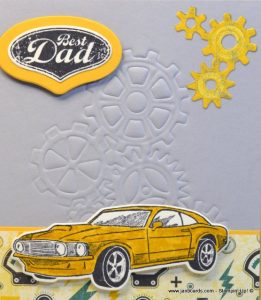 After I had shared yesterday’s card on Facebook, one of my crafter friends suggested I could try spritzing my cardstock before doing the embossing. Given that is what I do before I use my Dynamic Embossing Folder, I’m really surprised I didn’t think of it. Before I started videoing, I gave it a go! It did work to a cetain  degree but tears were still happening. My first conclusion on this technique is that successful embossing with Vellum definitely works, although the embossing isn’t as deep as it could be – it still looks great and I’m really pleased to recommend it. My second conclusion is that tears will only happen to a small percentage of crafters. Therefore, try the first one “naturally”! If there are tears, try spritzing. If tears still happen, use Vellum CS. With the two ideas I have suggested for torn cardstock, you’ll have very little wastage!

I hope you have found this helpful! That’s it from me today, so until tomorrow, happy crafting!