Yesterday morning, I carried on with having a good sort out of all my crafting goodies that have migrated out of my studio on to the landing! Although I was able to put several items into the charity bag, I didn’t manage to get rid of much! However, I was able to re-arrange what I have in my  storage boxes. Now, for example, I have a box for Christmas products, like plastic baubles, artificial snow; I also have a stationery box for notepads, pens for dry wipe boards, etc. One last area to sort out today, and the landing will at least look tidy again, albeit not clear! 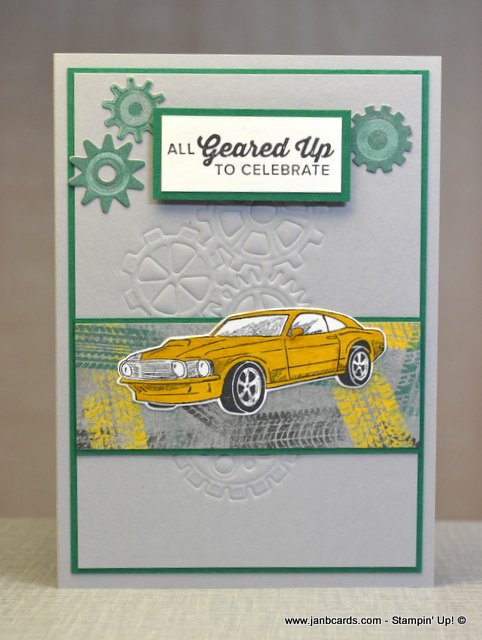 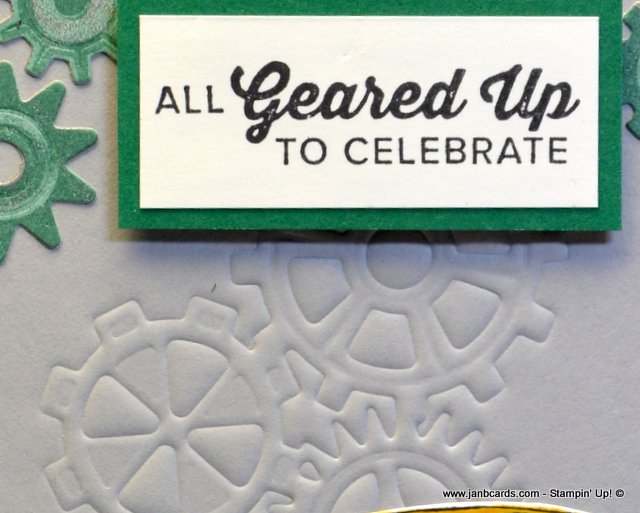 I started crafting after I’d had my lunch, and made two samples for Wednesday’s video project, which I’ll be recording today. My next project was today’s card.  The first thing I wanted to do was to die cut the cogs from one of the sheets from the Classic Garage 6″ x 6″ Designer Series Paper (DSP). I already knew the large die would die cut the large group of six cogs, but I didn’t realise all the cog dies can die cut a cog on the DSP. The idea I had for today’s card came from a card I saw on Pinterest where the crafter had used the multi-cog die to emboss the background using the Big Shot Embossing Mats. I was really disappointed with my first attempt. It reminded me of the problems I frequently had when I used Embossing Folders. That is, there were llittle tears in my cardstock, and the cardstock had “rucked” up on from side from the embossing out to the edge! Not liking waste, I put the die back on the embossed area, and die cut the cogs. This worked brilliantly because the little tears were in areas that were cut away. My plan was to adhere the Crumb Cake die cut cogs onto another layer of Crumb Cake Cardstock (CS). Then I had a fantastic lightbulb moment! 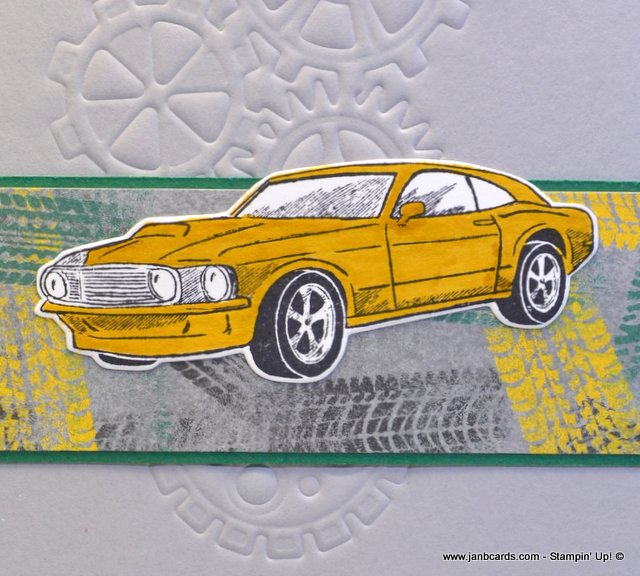 As the Embossing Mats were doing what some Embossing Folders do to my projects, why not try the same remedy!! You may have heard me say this before, but if you have Embossing Folders that create small tears in your cardstock, line the inside of the Embossing Folder, back and front, with a piece of our Vellum CS! The Vellum should be left in there permanently. I cut two layers in Smokey Slate CS. As I made my sandwich, I laid a piece of our Vellum CS on top of the die, then the cardstock, then the blue mat and last of all the white mat. I cranked it through the Big Shot and it worked beautifully! Have a very close look at the photographs! There’s not a tear to be seen anywhere! 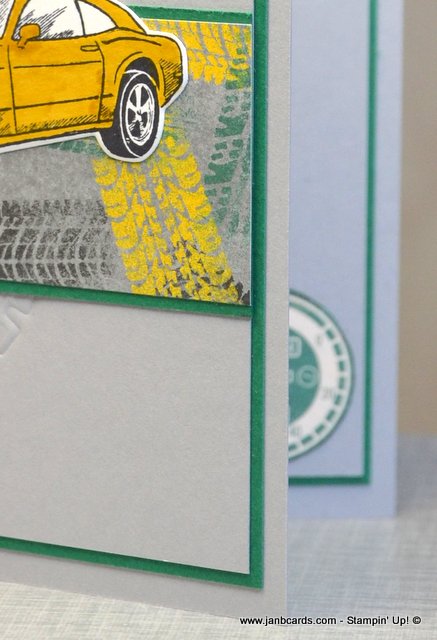 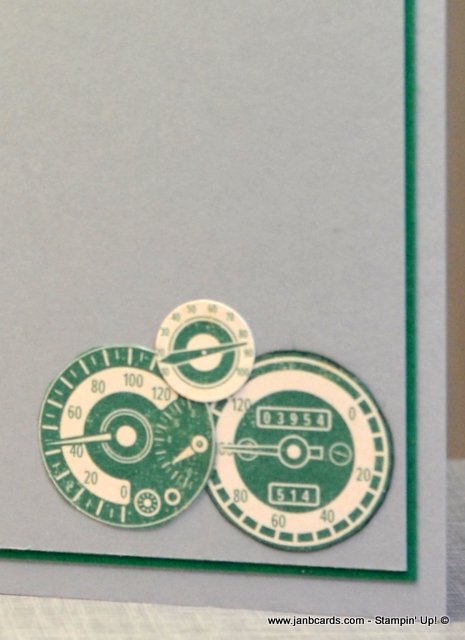 After that, making the card was plain sailing, well almost! I picked up my So Saffron Stampin Write Marker Pen, instead of Crushed Curry. Rather than waste the car, I coloured over the top with Crushed Curry and I think it looks fine. The green cardstock I’ve used is Shaded Spruce, instead of Tranquil Tide. I have allowed Tranquil Tide to run down as it will be retiring on 3rd June 2019. The other colours I’m trying to use up by the time they retire are Powder Pink, Berry Burst, Fresh Fig and Lemon Lime Twist. I’ll be sorry to see all five of these colours leaving, but on the plus side, I’m looking forward to seeing what the five new colours are going to be! I punched the three dials that I’ve adhered inside the card from another sheet of the DSP.

This is a great bundle for masculine cards (page 43 Spring/Summer Catalogue), as long as you go easy with the dark colours! LOL! That’s it from me today. I hope you have a great Tuesday, and until I see you tomorrow, happy crafting.

Products used: please click on any link to be taken to my 24/7 online Stampin’ Up! shop