When I was working on the card I shared with you yesterday, I was already working on today’s card. I remembered making a similar card quite some time ago, and wanted to do something similar with this new stamp set. As it turned out, today’s card really is quite different but that’s a large part of the pleasure of cardmaking i.e you never know which direction your card design will end up going in! 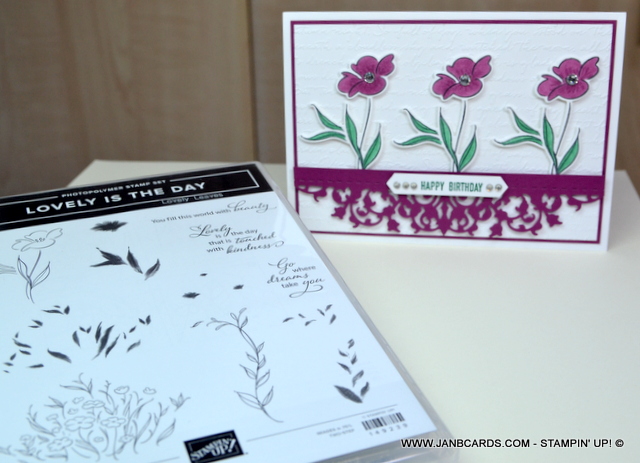 I have posted the video which refers to the original card below. Just by looking at the picture on the front of the screen below will show you how very different the two cards are. I’m not going to compare the two cards as I write today’s blog, because I’m treating today’s card as a totally new card that was inspired by a previous card!

I knew I wanted to use three identical flower images painted in Rich Razzleberry, but I wanted to do something different to wrapping some ribbon around the top two layers. I knew I had some Whisper White Cardstock (CS) lacy die-cut strips in my boxso I took them out and started playing.

The die-cuts had been created with the set of three Delicate Lace Edgelits, which were three different widths! It was too much of a challenge trying to get an idea what my card would look like with Rich Razzleberry CS die cuts, when I was playing with white ones. I die-cut one each of the three dies in Rich Razzleberry, and life suddenly became so much easier! 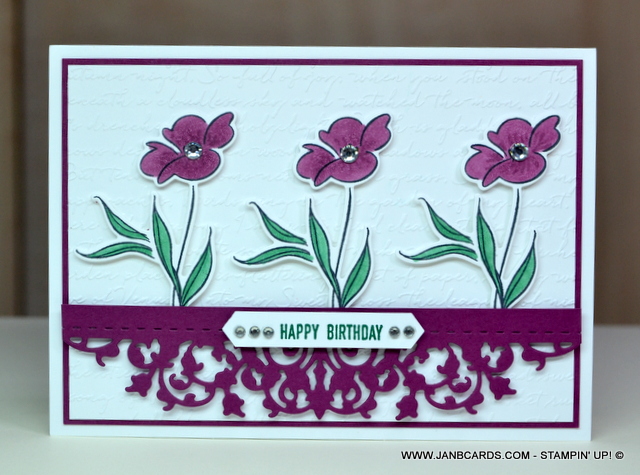 I knew I wanted to emboss the top Whisper White CS layer, preferably with Scripty or maybe Subtle. The new Brick & Mortar Embossing Folder (EF) has a far deeper impression than the earlier Brickwork EF and I felt it was too deep for today’s project. Next I had to decide whether to adhere the images down, or pop them up with Dimensionals. I also needed to work out if I wanted to pop the lacy strips up, or glue them down under the flower images. 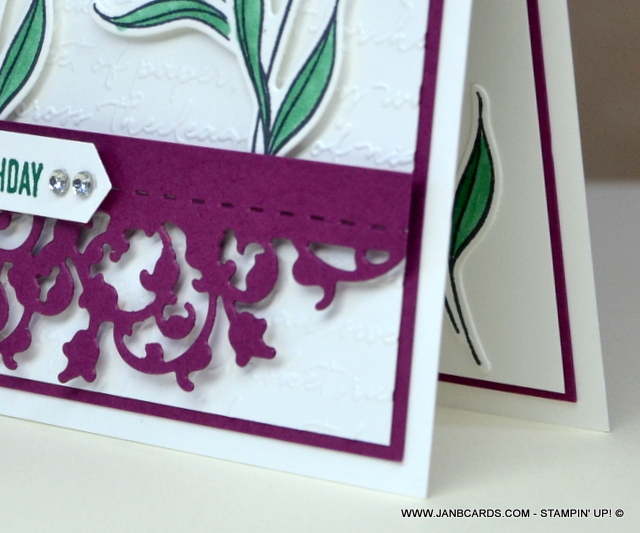 After playing with several different senarios, I knew how I wanted my card to look! I had all the pieces for the front of the card ready, and all I needed to do was to arrange everything in place! Using Tear & Tape, I adhered my embossed layer to a layer of Rich Razzleberyy CS. Next I worked out what position I needed to adhere the flowers. I’m so pleased I used the Scripty EF because I could see exactly where I needed the tops of my flowers to be, and also to keep them in a straight line. I added Mini Dimensionals – some whole and some sliced into pieces – to the flowers and adhered them in palce. 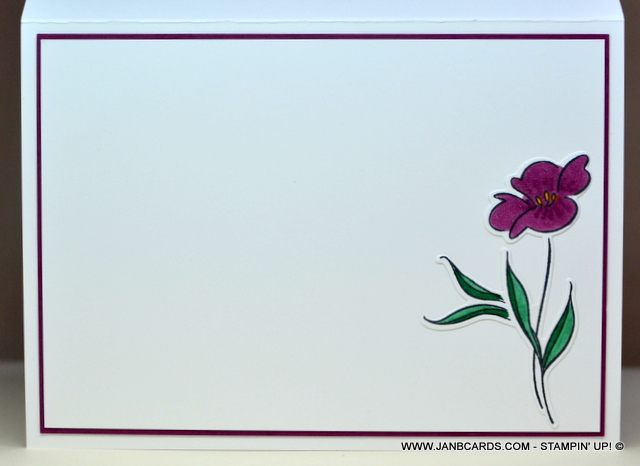 To adhere the lace in place, I added small bits of Dimensionals where I could. For the straight band at the top. I cut some strips off the straight edging of the Dimensionals, and adhered them straight down on the card front between the two flower stems, and the two edges. To finish the front of my card, I stamped Happy Birthday from the Itty Bitty Greetings Stamp Set, using Shaded Spuce Ink on Whisper White CS. I punched it out using the Classic Label Pnch. After adhering it to the band with Dimensionals, I added five Basic Rhinestones. Using my Clear Wink of Stella Glitter Pen I painted the flowers and leaves, and finished off with three large Rhinestones, one inside each flower. 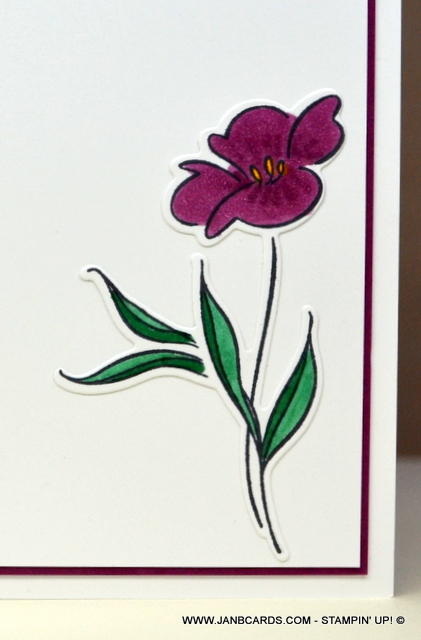 To decorate the inside of the card, I adhered a layer of Rich Razzleberry CS and a top layer of Whisper White CS. I made another flower image and adhered it in the bottom right hand corner.

Although my card isn’t what I’d planned it to be, I’m really pleased with the finished result! Finally, this is the video of the original card I had planned to copy! The stamp set I used is still in the current ctatalogue, but the EF isn’t. The impression in the current Bricks & Mortar EF is far too deep to use with today’s card, but Scripty or Subtle would both work brilliantly! That’s it from me today, and I look forward to being back with you tomorrow. In the meantime, happy crafting.