I hope you’ve had a lovely weekend and are starting this lovely new week feeling totally refreshed. Although we didn’t do anything special this weekend – apart from buying three new goldfish for the garden pond! – it was special because hubby wasn’t working! My week starts today with a visit to my homeopathic doctor! 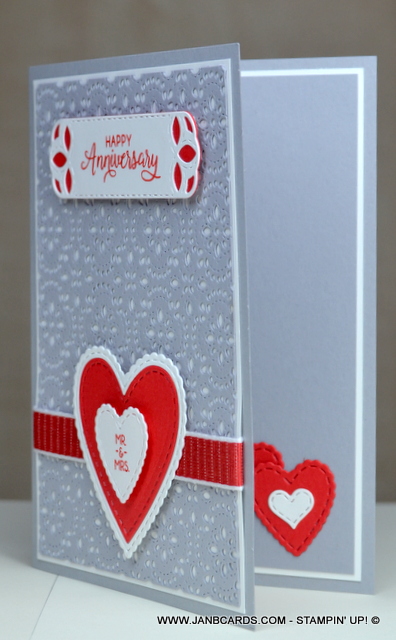 During the last two weeks’ challenges, I have managed to make card no. 6 in Sunday’s video, and then no. 7 for Monday morning. Unfortunately, it hasn’t worked out like that for this week. I didn’t design a masculine Diamond Easel Card for Sunday’s video, so today’s card is no. 6 and the final card. I have been so pleased how this challenge went because I really didn’t think I was going to get very far! But six cards is amazing! 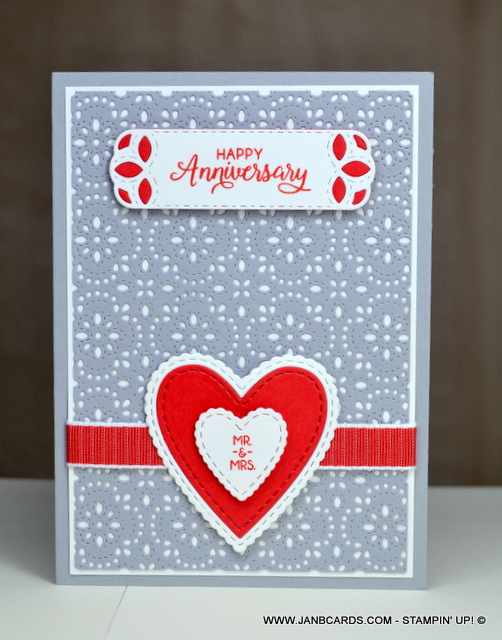 My colour combo today is Smokey Slate, Poppy Parade and Whisper White. The only stamp set I’ve used is the Beautiful Bouquet for the Happy Anniversary sentiment and the amazingly tiny Mr & Mrs. This tiny sentiment is so easy to overlook because the images on the front of the stamp case are at 60%. Fortunately, the size was absolutely spot on for my needs! 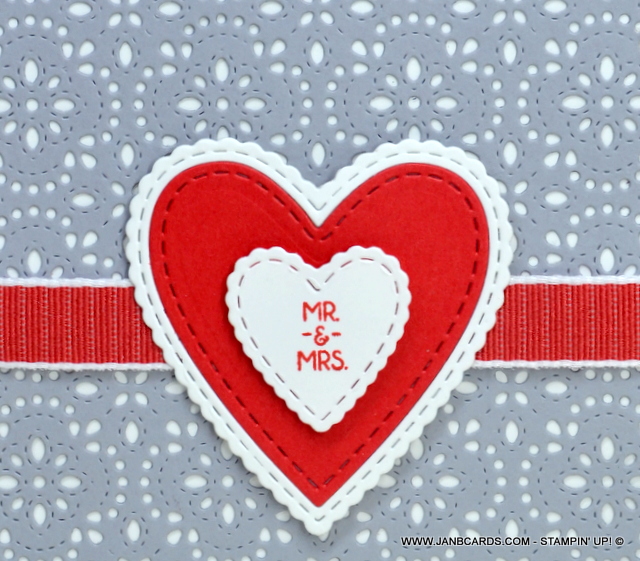 The large heart is from the Be Mine Stitched Framelits Dies, and I die cut using the third (count from the smallest die first) scalloped heart and Whisper White Cardstock (CS). This die cuts the scalloped outline heart and the solid inside heart. I decided I wanted to have a Poppy Parade inner heart with a Whisper White outer heart. The next hearts I die-cut were the same as the Whisper White heart I’d just made but in Poppy Parade CS. 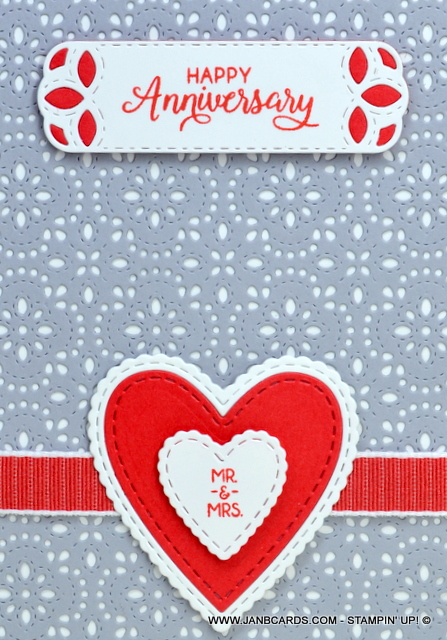 More often than not I like to dry-emboss the top layer of my cards, but today I decided on something different! I die-cut the entire top layer using the Stitched Lace Die, but I found it amazingly difficult to remove the Smokey Slate layer from the die. Going forward, I’d make sure that I put a sheet of wax paper between the cardstock and the die! 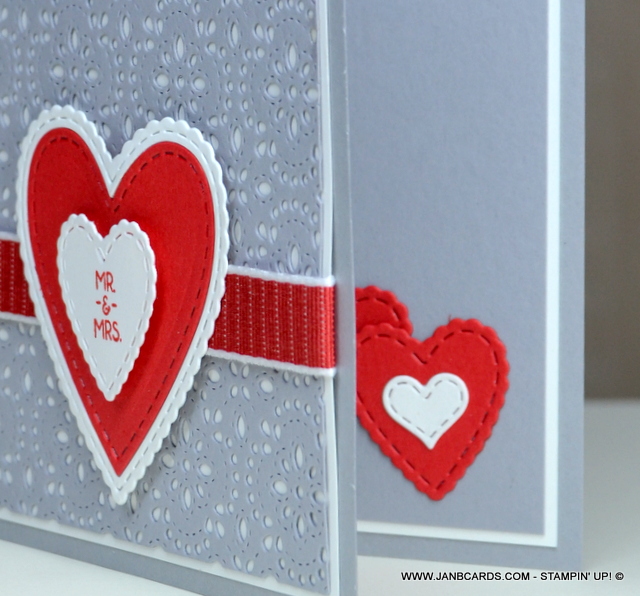 The result produced by this die is stunning, and well worth the slight inconvenience of using some waxed paper. I also recommend that you cut your layer to the finished size it needs to be. By doing this, it’s amazingly easy to place your cardstock on the die so the design is perfectly centred! 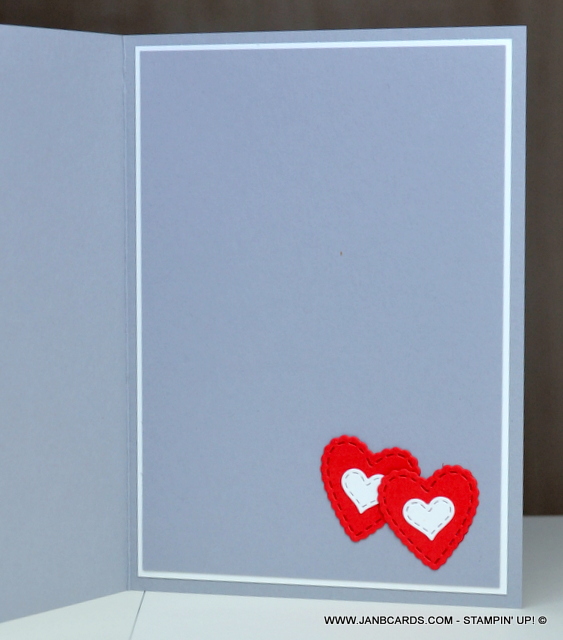 I die cut the Happy Anniversary sentiment using the Stitched Labels Framelit Die. It made the card look very unbalanced with the lower half of the card, which had the strip of Poppy Parade Ribbon, as well as the Poppy Parade and Whisper White Cardstock heart. The sentiment needed a layer, and I decided to use the same die again, but in Poppy Parade and this time to glue the little cut outs back into the die-cut holes. I did this by putting some regular Scotch Tape on the back of the die cuts before I took it out of the die. 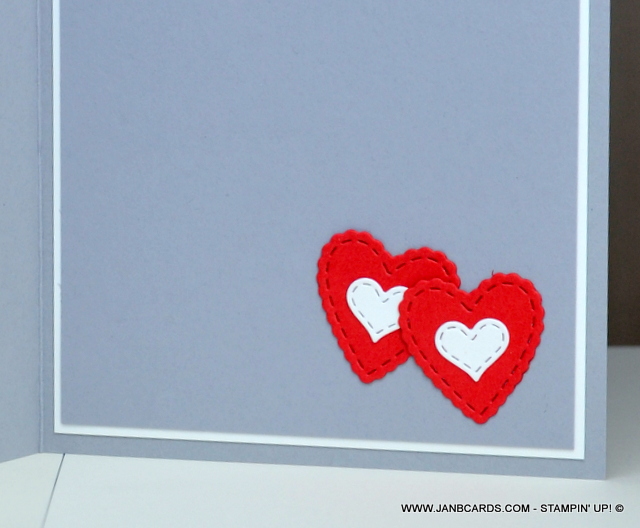 All the cards I’ve made for my Masculine Anniversary cards can be used for anniversary cards for couples, and with a change of sentiment would make great Valentine cards, too. I know that’s some time away yet, but you can make a note to revisit this week’s blogs when needed! That’s it from me today. If you have an idea for a challenge for me for this week, please leave a comment in the box below. All (reasonable) suggestions will be considered! I look forward to being back with you tomorrow, and in the meantime, happy crafting.

Products used for today’s project: please click on any link to be taken to my 24/7 online Stampin’ Up! shop. Thank you. xx