I hope you’ve had a great weekend and are starting the new week with your batteries fully recharged! Yesterday my batteries died totally and I had to go back to bed in the afternoon for a sleep! It’s very rare that I do that because I can’t catnap; I have to have a full blown lights out for three hours! It was a bit chunk out of my day, but it did me the world of good! The reason I was so tired was that I had a really late night on Saturday – I went to bed at 1.30 am! I’m pleased to say that I’m starting the week with my batteries now fully charged! 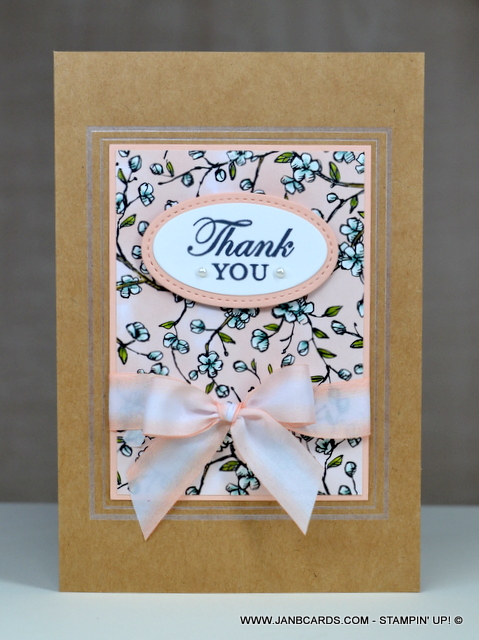 You may remember one of the swaps I received on the Incentive Trip in July was a card made using one of these Magnolia Lane cards and envelopes. I was so impressed with the swap I received that I ordered some for myself. When they arrived, I was initially disappointed with the thickness of the cards. It just didn’t feel like the card I’d received as a swap! 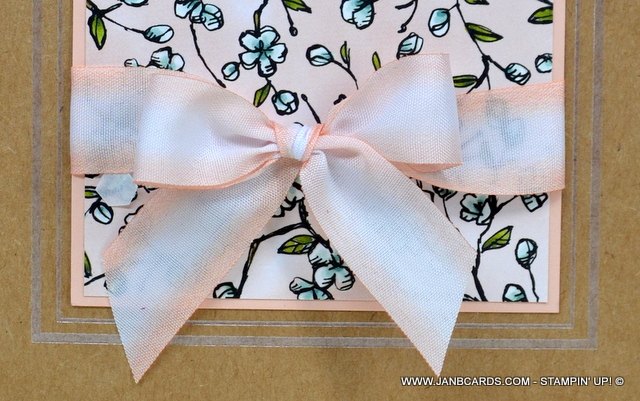 My opinion changed totally once I’d made my first card! When it was paired with one the envelopes, plus the liner that comes as part of the pack, my confidence was fully restored! I decided to make a couple of thank you cards, using the Bird Ballad Designer Series Paper (DSP) instead of the Magnolia Lane DSP. 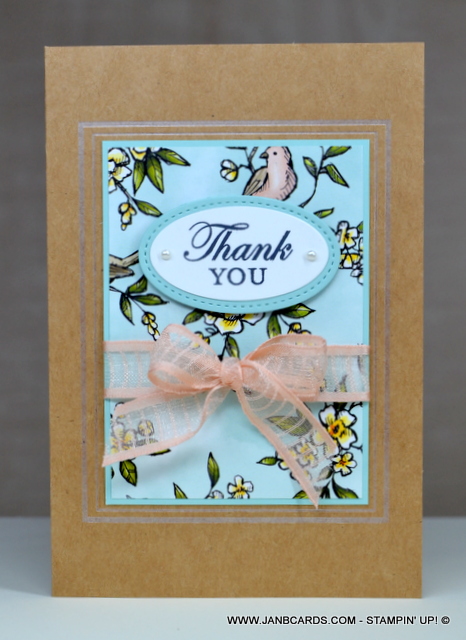 Not surprisingly, these cards and envelopes are inter-changeable with different suites. The only issue someone may have is that the design on the liner was created with Magnolia Lane in mind. I should have taken a photograph to show you! You can see them on page 171 of the Annual Catalogue. I’m fine with the design. 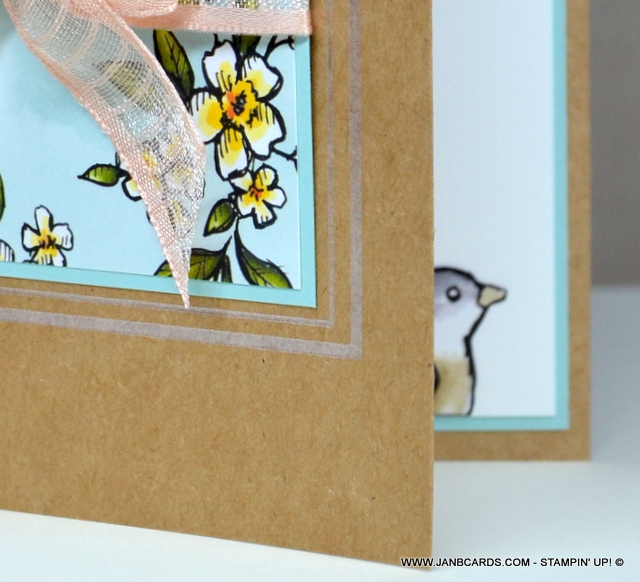 The liner is white and has images of leaves and blossoms in Mossy Meadow. For my two cards today, I used the Bird Ballad DSP, which includes Old Olive in the colours, which blends brilliantly with the Mossy Meadow! I thought the frames on the front of the card were silver foiling, but the catalogue is says it’s White Foil Accents, which explains why it looks very delicate. 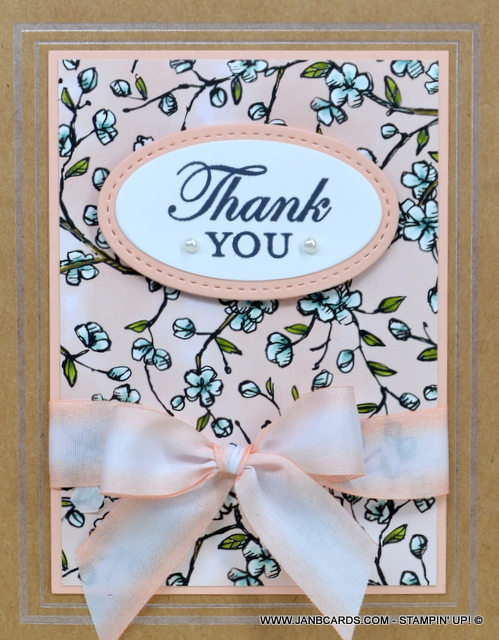 On the Petal Pink card, I used a design from the DSP that’s branches, blossoms and flowers, and I was doubtful that it would work. After I had adhered the DSP to a layer of Petal Pink Cardstock (CS), I tied a retired ribbon around the lower half of the layers and I felt confident that yes, it would work. I adhered the layer to the card front, and started to look for a suitably sized THANK YOU sentiment! 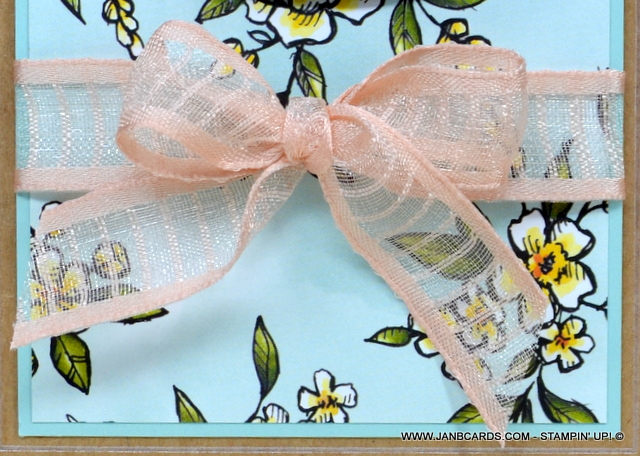 I chose the sentiment in the Magnolia Blooms stamp set, which is available in the beginner’s catalogue. The stamp set is similar to the Good Morning Magnolia Stamp Set but smaller and the images are less fussy. I stamped the sentiment in Black Memento Ink, and die cut it with an oval die from the Layering Oval Dies. Next I die-cut a layer in Petal Pink CS using a larger Stitched Shape Oval Die. Once I had adhered the two together, I adhered them to my card front using Dimensionals and my card lookes great. 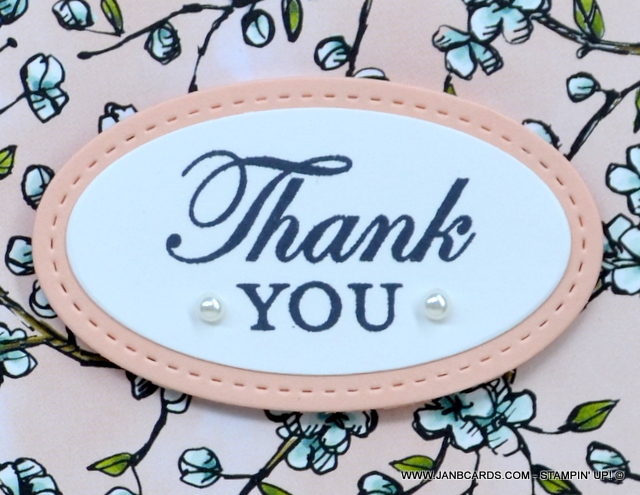 Inside the card I added a layer of Petal Pink CS and then a layer of Whisper White CS. I fussy cut a bird sitting on a branch from another sheet from the Bird Ballad DSP pack, and adhered it in the bottom right-hand corner. Next I decided to make another card the same but this time using a different design from the Bird Ballad DSP, which has a background of Pool Party. 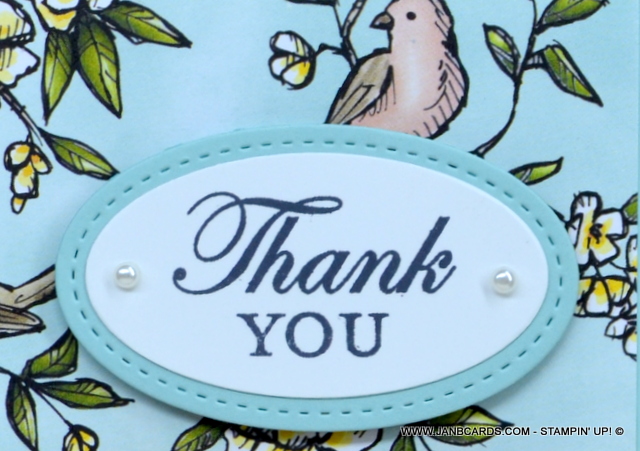 I duplicated everything from the front of the Petal Pink card but attached the current Petal Pink ribbon a bit higher up. Although there’s a Petal Pink bird on the DSP near the top, I’m not sure that’s enough pink to make my choice of ribbon correct. I had tried a couple of linen coloured ribbons that I didn’t consider quite right. My first choice would have been a ribbon in Pool Party. 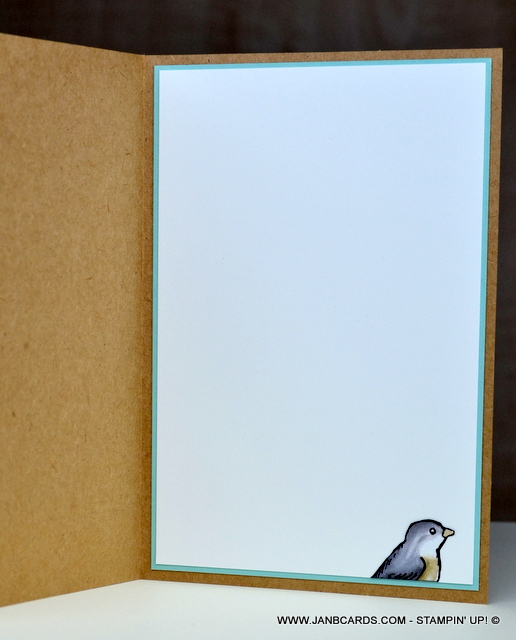 I did the sentiment the same but layered on a piece of Pool Party CS. I added two Basic Pearls on the outside edges of the THANK on the sentiment, where on the Petal Pink card, I added the Basic Pearls either side of the word YOU. Inside the blue card, I added a layer of Pool Party CS and a top layer of Whisper White CS. I fussy cut a partial bird and adhered it at the bottom of the top layer, in the bottom right-hand corner. 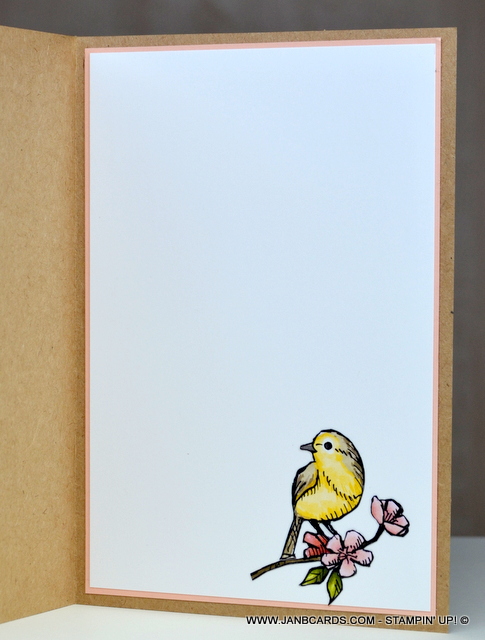 I now have two great Thank You cards ready to be sent out. Maybe I’ll try some other DSP’s! That’s it from me today. I hope you have a marvellous Monday, and I look forward to being back with you tomorrow, In the meantime, happy carfting!