I hope you have enjoyed a brilliant weekend. Yesterday afternoon we were collected for our journey to Heathrow Airport twenty minutes early. We were ready so we made an earlier than expected start to our honeymoon.  When we arrived at Heathrow Airport Terminal 4, we headed straight for the hotel we had booked for Sunday night. The hotel is called Yotel and has been here for eleven years! I’d never heard of them! 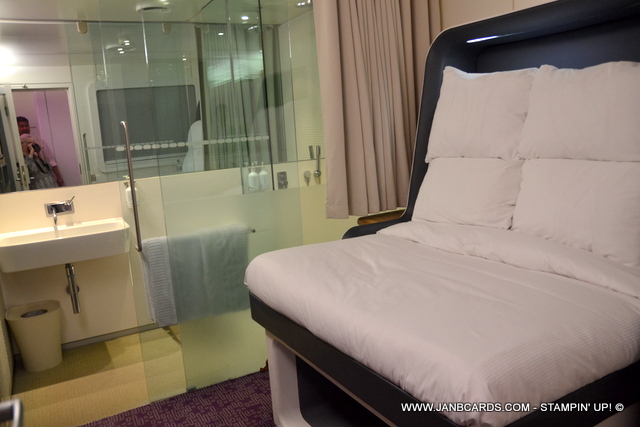 I forgot there was mirror opposite the door where I was photographing! LOL! Notice the gap under the bed for suitcases. You can see from this photograph, the glass to the right, which is in front of the toilet and shower, the bottom half is frosted. The door which is front of the washbasin – when closed – is clear all the way down. You can also see the half-drop curtain which reaches from one sde of the en-suite to the other! The large grey square to the right of where I’m standing is the window that looks out onto the corridor…………with the blind down.

The hotel doesn’t have rooms, they have pods! I have never seen anything like it, and once I’d recovered from my initial shock, I was totally bemused! I took some photographs to share with you. I really hope the photographs convey what a great concept this is! The pod has a double bed which works the same as flat beds on airplanes i.e. press a button to bring the bed down, and press a different button, to pull the bed back up again! There’s a huge void under the bed to store suitcases. 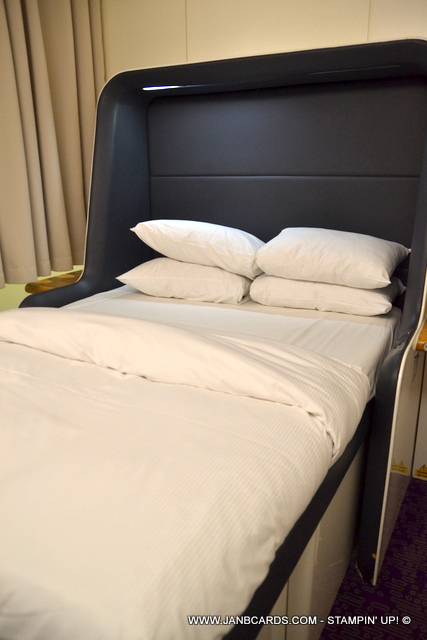 The bed extended into night-mode!

There is a large window that faces the rather narrow corridor, but an excellent-fitting blind covers it totally, so no chance to peep out or peep in. 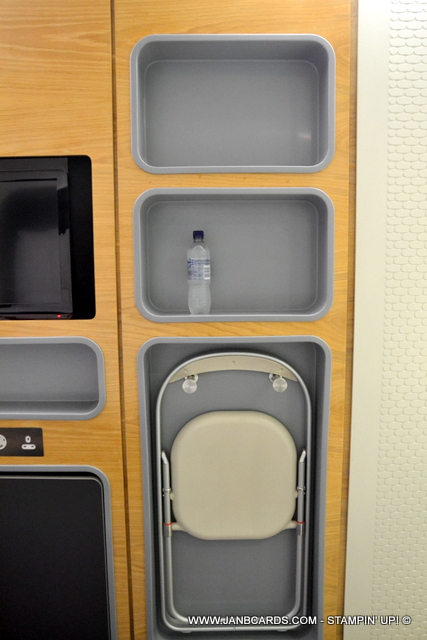 Plastic “boxes” on the walls provide the shelves. On the right is the fold-up chair – I think there should be two in a double pod, but who’s going to complain when they’re staying just one night! To the left of the chair is the table with a bank of sockets above. Above that is the TV.

On the walls are plastic “boxes” that act like shelves. I’m sitting on a fold-up chair that hangs on the wall when not in use, and a table that folds flat against the wall. There’s the usual TV, telephone, sockets, wi-fi, and of course an en-suite bathroom! This was our only criticism because we have to pull a curtain across the window if we wanted to enjoy some privacy in the bathroom. The curtain was just half a drop, which was fine for the toilet and shower because the lower glass was frosted; but not so by the washbasin. Although the half-drop curtain extended across, the lower half of glass panel and glass door wasn’t frosted! 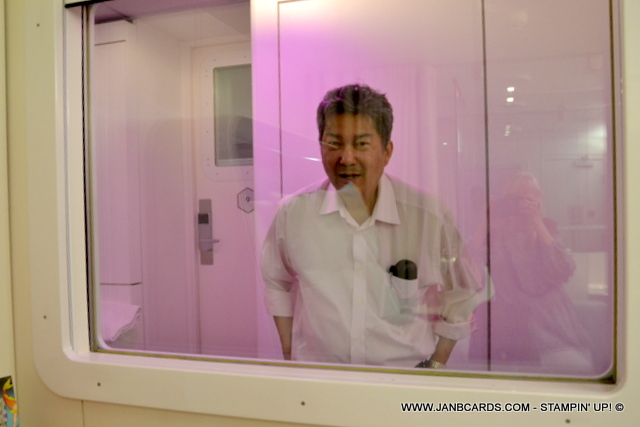 Hubby looking in through the window! 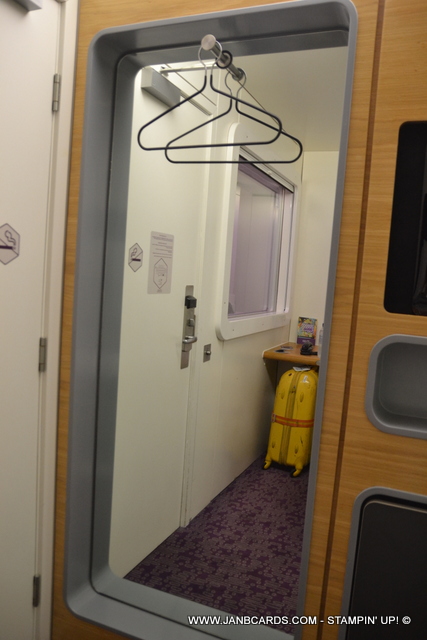 This is the only wardrobe space available, 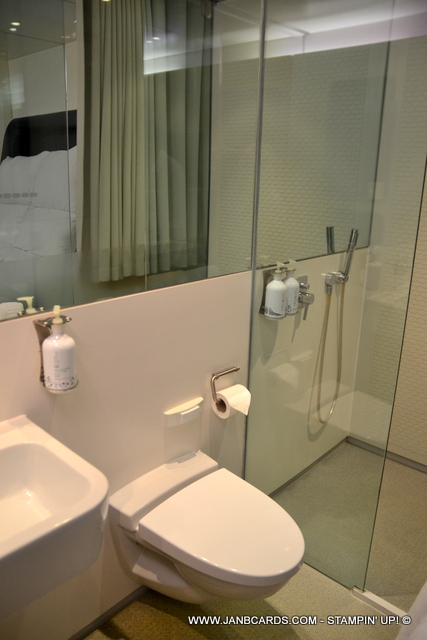 I wasn’t going to, but here’s the en-suite!

Everything about this pod has been carefully thought out (except the glass in front of the wash basin). We were staying for the night waiting for a morning flight, rather than spending the night at home and getting up at silly o’clock to get to the airport three hours before departure time. For travellers like us, this is a brilliant idea, but obviously wouldn’t suit everyone! Tomorrow I’ll let you know what it was like sleeping in the pod!

In the meantime, happy crafting,