Yesterday was the last full day of our visit to Hong Kong, and today we’re packing for the long flight home. We went to Macau which is an autonomous region on the south coast of China, and is part of China. 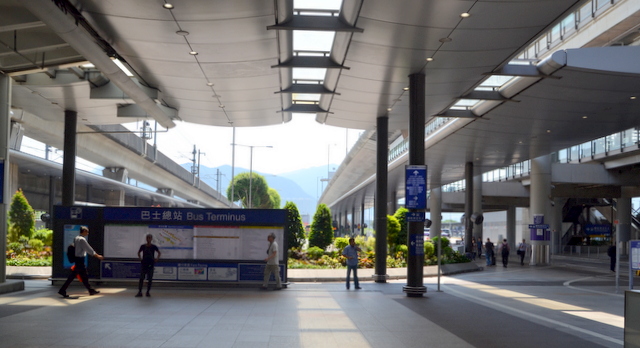 Do you remember the photograph I shared when I told you about our visit to Lantau Island? The photograph where you can see the road in the sea, which disppears into the sea, and reappears a bit further away? See below. 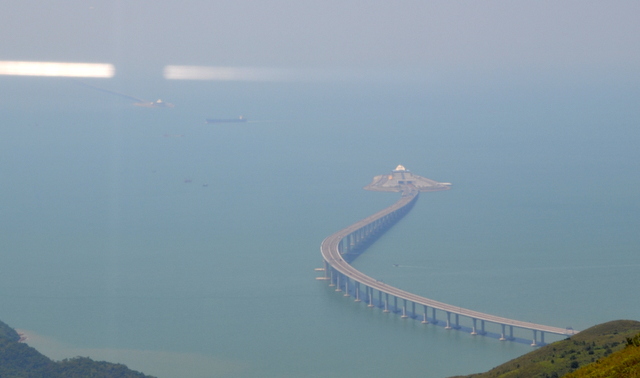 This is the photograph I shared with our trip to Lantau Island. Note the white roof where the road disappears into the sea on the right-hand side.

Today we travelled on that road in the shuttle bus and actually saw where the tunnel went under the sea! This was definitely the highlight of our visit for me! 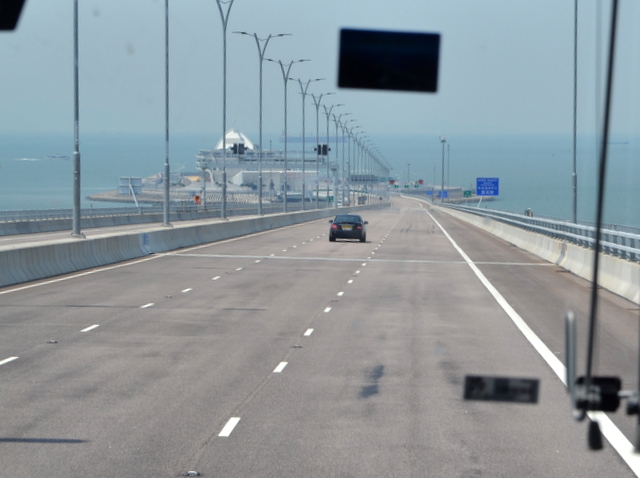 To get to Macau we took the train to Central, then a bus to the terminal to catch the shuttle bus. We had to go through immigration – fortunately we knew we needed our passports! 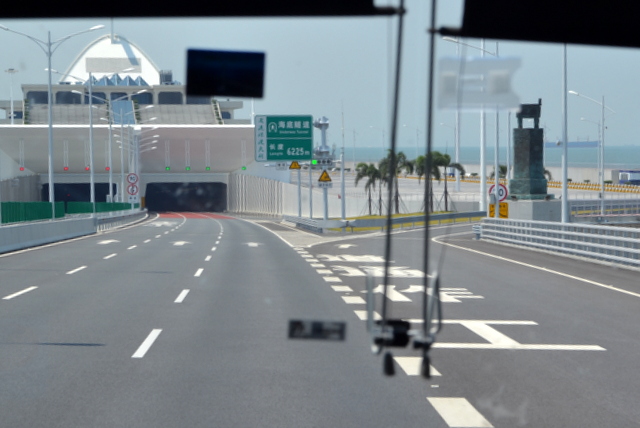 Thw white roof as the road goes into the tunnel below the sea!

When we arrived in Macau, we made our way by bus to the terminal where all the hotel shuttle buses were and chose the Venetian bus, which dropped us off at the front of the hotel. The Venetian is a replica of the Venetian in Las Vegas but twice the size. Having visited Vegas seven times, we didn’t think it was any match for the Vegas Venetian. 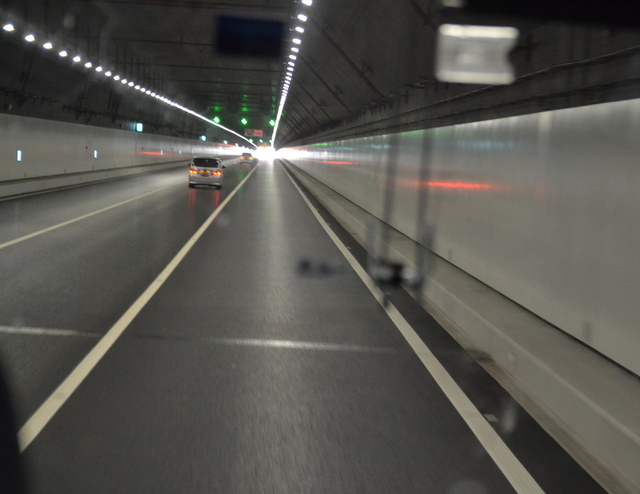 The light at the end of the tunnel!

When we went into the Venetian, and found the map to guide us around the Venetion, we found there were four hotels which were inter-linked with each other i.e. the Sands, the Venetian, the Parisian, and the Four Seasons. As seasoned travellers to Vegas, we were very disappointed. 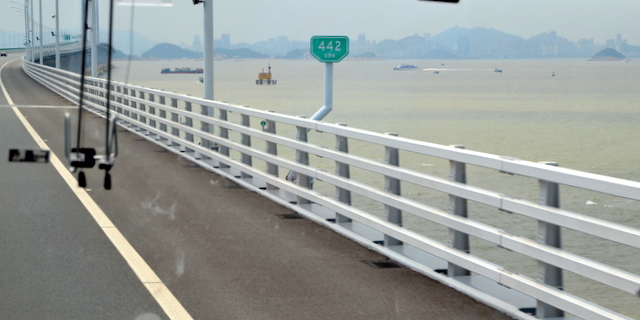 We found our way out of the hotel to see what we could visit nearby, and it appeared it was just more hotels! This definitely was not what we had expected! As it was about 4 pm we decided to make tracks back home. We started with another free hotel shuttle bus, but this time we headed to the TurboJet Ferry.  This was very comfortable but we were surprised it took just over an hour to get back to Hong Kong Island. 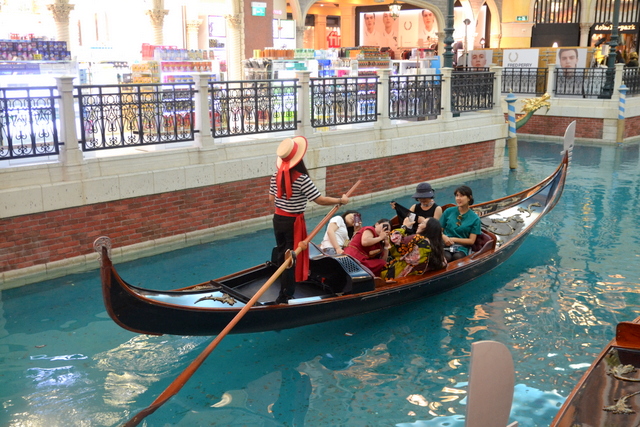 Gondola in the Venetian.

Our feelings about our visit Macau are best summed up by saying, it wasn’t what we had expected, but we’re glad we did it! We will be travelling home without any regrets! 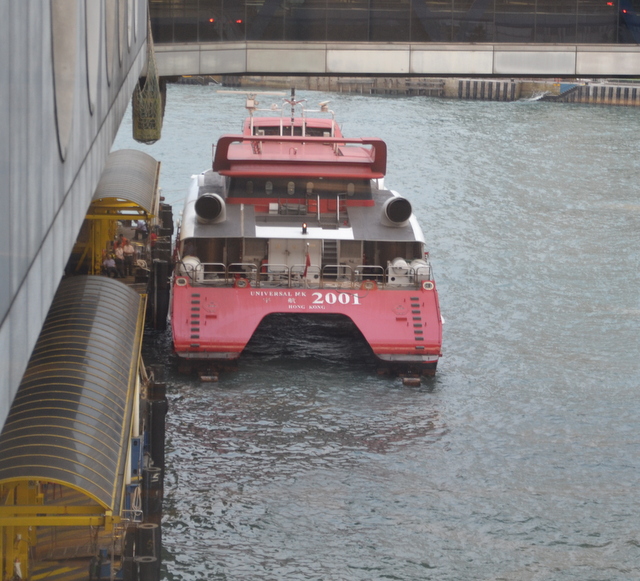 The rear of the TurboJet Ferry.

Overall, we’ve had a fantastic time in Hong Kong and would recommend it as a place to visit. We would definitely point out the problems we’ve had trying to get gluten-free food for me! The only visible sign of the recent protests was a wall next door but one to the MTR Station. It’s covered with various PostIt Notes with messages, most of which are written in Cantonese. 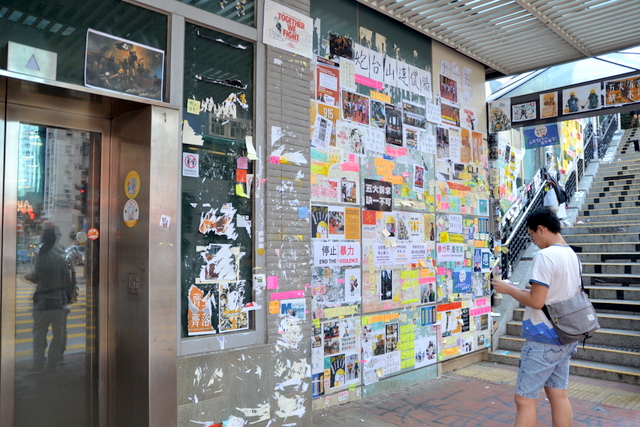 The wall of protest next door but one to our local railway station.

Travelling on public transport in Hong Kong has been very easy and cheap. Eating in the hundreds of Chinese restaurants looks very cheap as well, but we had problems finding restaurants that serve gluten-free! Surprisingly, I’m travelling home having put on weight! I’m not sure how this has happened, but hey ho, we’ve had a fabulous honeymoon, and I’ll get rid of those few pounds before our next trip, which will be Dortmund, in Germany for the Stampin’ Up! OnStage Convention in November! LOL!

I  will be back soon, probably after we arrive home! In the meantime, happy crafting!