Tomorrow is the beginning of November, and sees the start of two promotions from Stampin’ Up! First of all, the new Trimmer is available for everybody to order! I have been giving mine a really good work out and I can wholeheartedly recommend it! It has several features that we didn’t have on the old trimmer. One of the best is that the new trimmer will cut tiny slithers off a piece of cardstock without scrunching it up.

When I was working on yesterday’s card, the sentiment banner that went from side to side was about an 1/8″ too wide. I used my trimmer to slice it off and it worked like a treat. I also love that there is a barrier almost all the way across the top, which helps to keep the cardstock in place, and which I think contributes to the Trimmer being able to slice very thin strips. The other contributory factor is that the cutting track is far narrower than the old trimmer. 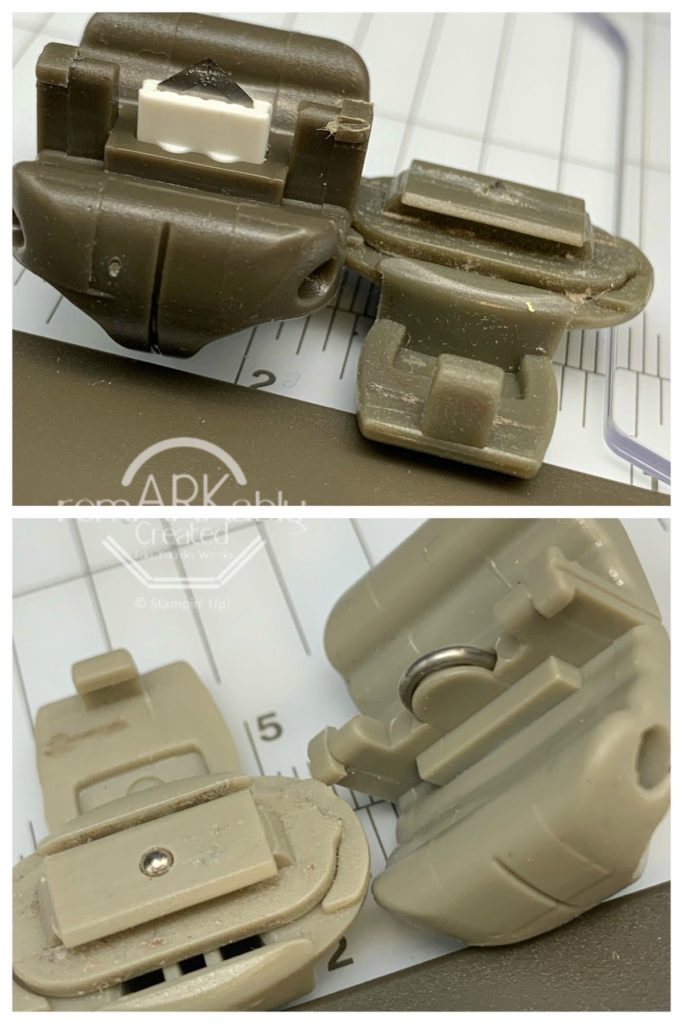 When I did my video review of the new Trimmer, I wasn’t happy with the way it cut our Foil. A subscriber recommended cutting it with the Foil face down, which I have since tried and the cut is brilliant. The downside is that there is a ridge on the Foil side, but it’s very easy to flatten it down by gently running over the edge with a Bone Folder. See Sunday’s video for a quick demo! 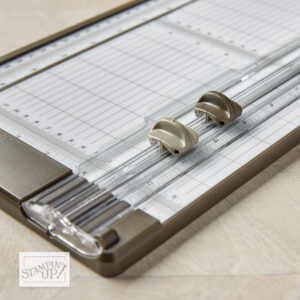 I’ve been using my trimmer every day for three weeks and there isn’t any sign of the blade needing to be replaced anytime soon. One of the jobs I did was to prep 48 swaps and each one took 5 cuts – that’s total of 240 cuts! 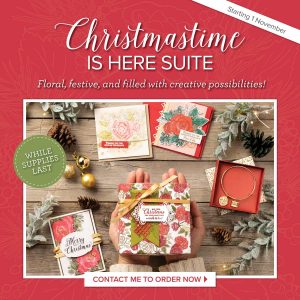 The second promotion that goes live tomorrow is the Christmastime Is Here Suite. I used the Designer Series Paper (DSP), the Roses Dies, Gold Ribbon and Gold Glitter Enamel Dots from this suite to create today’s card. The main image has been die-cut from the DSP. I painted the flowers and the berries using my Clear Wink Of Stella Glitter Pen. 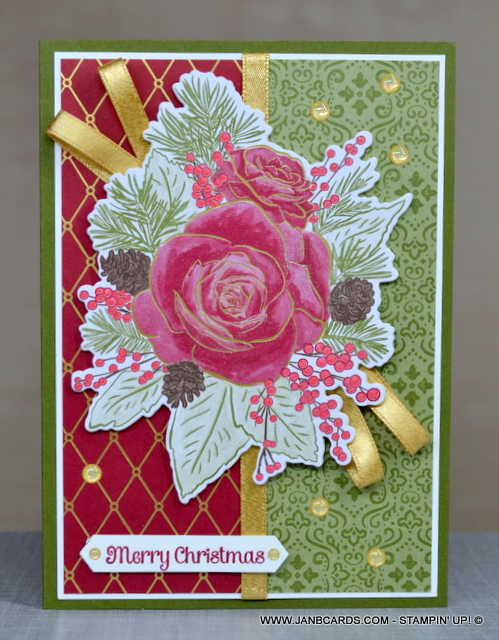 Rather than using lots of Dimensionals to pop the image up, I die-cut four identical layers using the Thick Whisper White Cardstock (CS) and adhered them altogether! The sentiment I’ve used is half of a sentiment that’s in the Itty Bitty Christmas Stamp Set. I stamped it on a piece of Whisper White CS using Cherry Cobbler Ink. Then I punched the top line out using the Classic Label Punch. The full sentiment reads MERRY CHRISTMAS AND A HAPPY NEW YEAR. 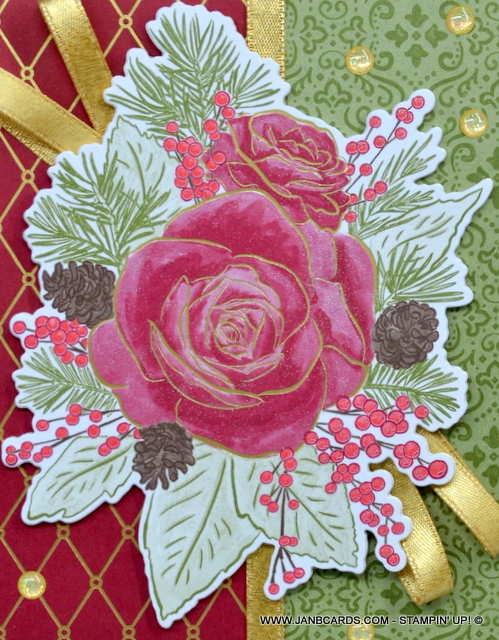 To pop the sentiment up, I punched another four labels and adhered them all together in the same way I did for the image. Before I adhered the image to the card, I used Glue Dots to attach some of the Gold Ribbon behind the image at top and bottom. I fussy cut another image from the edge of a sheet of DSP and adhered it on the bottom of the layer inside the card. I also painted the flowers and the berries with my Wink of Stella pen. An unusually fussy card for me but I like it! 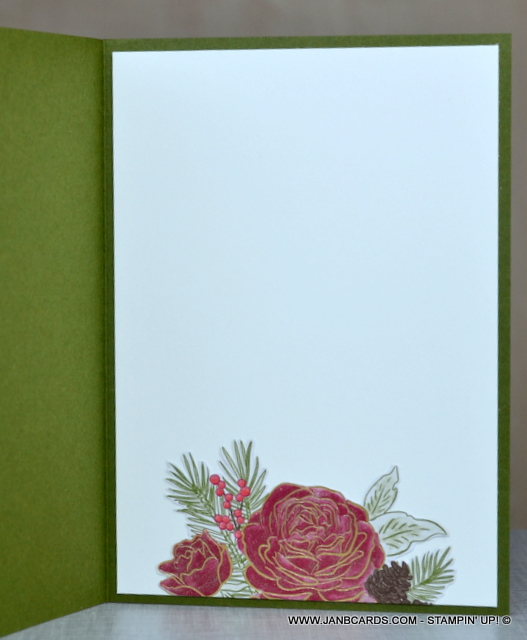 I’m also running a special promotion during November! For all my online customers who shop with me during November and spend £30 or more excluding delivery, I will send them one of these Stampin’ Up! logo’d scrap bins. They’re small enough to sit on your craft table but big enough to be useful! They measure approximately 9″ tall and 7″ diameter. An added benefit of these scrap bins is that they fold flat for travelling! 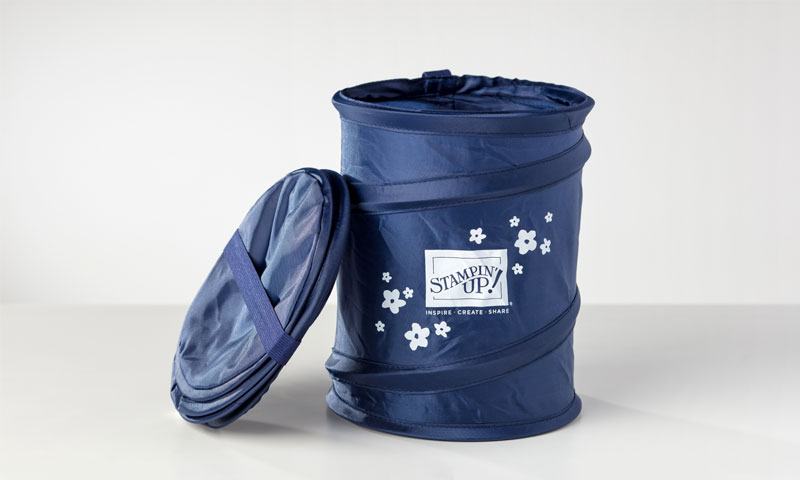 That’s not a lid propped up against the bin! It’s a folded bin!

That’s about it from me today! I look forward to being back with you tomorrow, and in the meantime, happy crafting.