When I posted my video last Sunday showing how I made the Snow Globe card, several Crafters asked if the card would go through the post. I wasn’t sure, so I posted my Snow Globe no 2 to myself, and it arrived back today. I’d put the card into a regular Stampin’ Up! envelope, and then into a small padded envelope. The SU envelope took a bit of a bashing, but I was amazed at how little damage there was to the actual dome! It was very difficult to photograph but I’ve marked the spot with a pointed finger! Amazing! 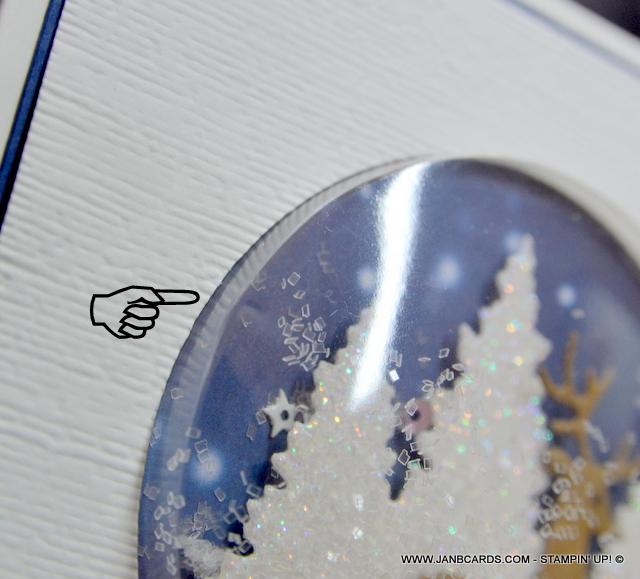 Yesterday I played with the Frosted Foliage Stamp Set for the first time, although I have used the co-ordinating Frosted Frames Dies before. I stamped the branch with the berries on a piece of Whisper White Cardstock (CS) using Memento Ink. I used Seaside Spray Light and Dark Stampin’ Blends to colour the berries. I wanted to fill in all the white space around the branch, so I used the large stamp which is of various sizes of snowflakes. Using Seaside Spay Ink, stamped off once, I applied the stamp once in front of the stem and once behind it. 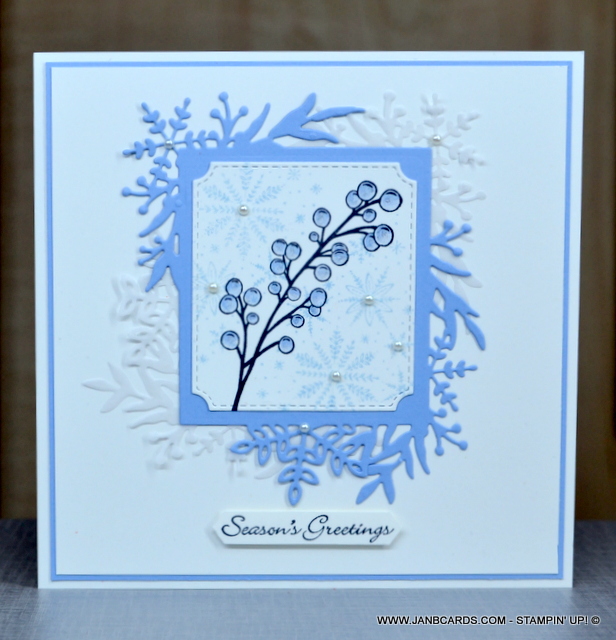 I used the stitched frame die to cut the image out and I was happy that almost all the white space was covered. After getting a Whisper White CS card base, a layer of Seaside Spray CS, and a top layer of Whisper White CS, I started playing around with arranging the image and the die-cuts. It all looked rather bleak, so I decided to stamp over the top layer with the snowflakes the same way I did on the image. It was OK but not right! I wasn’t happy! 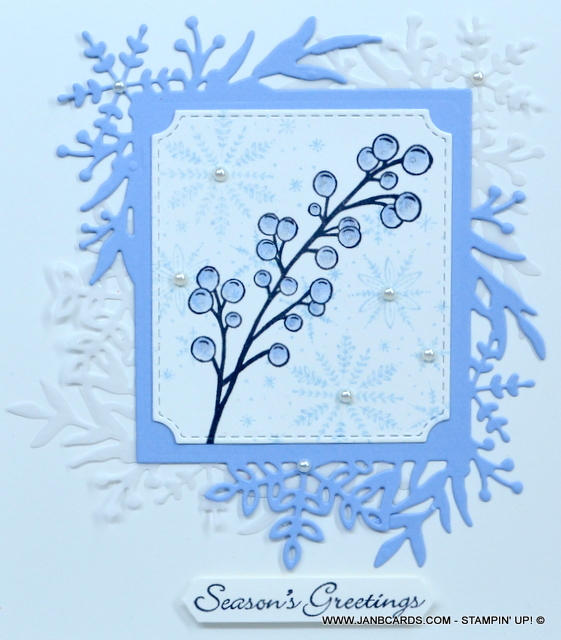 I decided to emboss the top layer with the Subtle 3D (Dynamic) Embossing Folder. I had a spare SEASON’S GREETING sentiment leftover from yesterday’s card – I made three of them! – which helped to balance out my card a bit. Still not happy! Next I decided to die-cut the main foliage frame using our Vellum Cardstock. I cut it into two pieces, i.e. each leafy corner, and I trimmed off the surplus vellum from the largest corn. Eventually, I decided to adhere the Vellum corners, one each to the blank Seaside Spray CS corners! Ah, getting there! 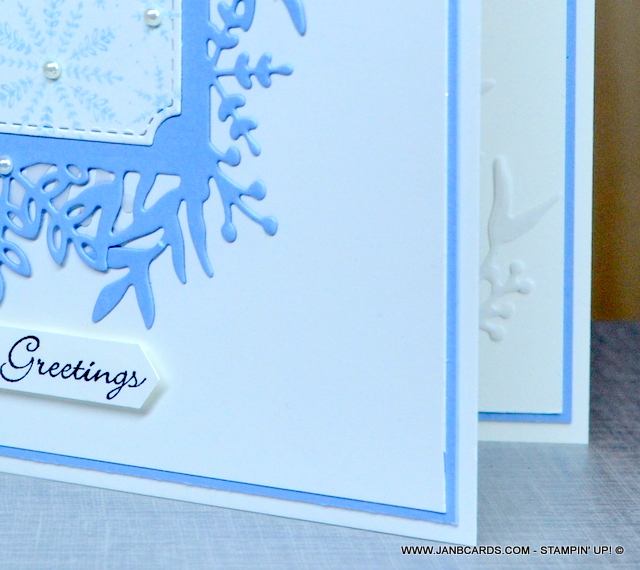 I took another clean top layer of Whisper White CS, positioned it onto the Seaside Spray CS layer and then onto the card base. Now my card was starting to look good, but it needed more space, a bigger card! I cut a 6″ x 6″ card from a large piece of Whisper White CS and cut the necessary layers. Once I laid my image onto the larger card, I was happy! The plain white background was so right to show off the Vellum at its best. 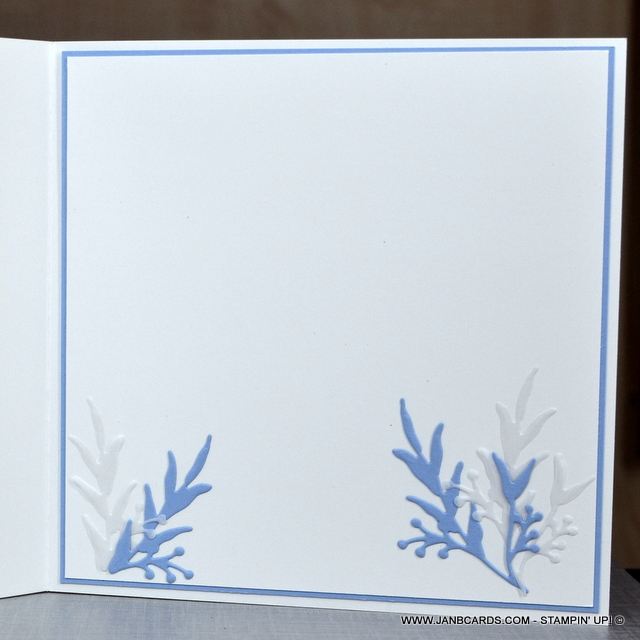 Even though my card was much bigger, I decided to stay with the small sentiment because I was happy how it help to balance everything out, despite its small size. When I adhered the image on to my card base, I applied small amounts of Tombow behind the snowflakes and the foliage, as well as the large area in the centre. I’m really pleased that the Tomow doesn’t show through the Vellum! To finish the front of the card, I painted the berries with my Clear Wink of Stella Glitter Pen, and added some Basic Pearl Jewels to the centres of the main snowflakes. 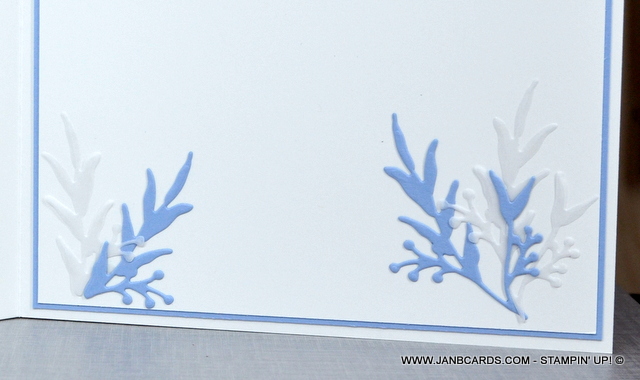 To decorate the inside of the card, I added a Seaside Spray CS layer, and then a Whisper White CS layer. I decided to use the die that cuts two foliage die-cuts – one single branch and one double. To keep the same idea from the front of the card I also die-cut them in Vellum. I adhered the vellum foliage first and then added the cardstock foliage. Fortunately, on both piece I was able to lift a small part of the Vellum foliage and adhere it over the blue! 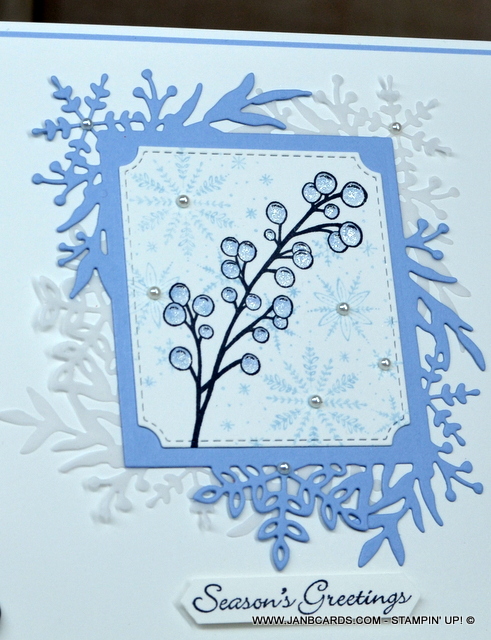 You can just about see the Wink of Stella on the berries!

I know I often say I don’t like large plain white spaces, but this card is the exception to the rule – the image needs all that white space! In particular, it really helps to show the Vellum off beautifully. Well, that’s it from me today. Have a great day and I look forward to being back with you tomorrw! Happy crafting.