I had it in my mind all week that I was going to make a snow globe card for today’s video! When I’m about to do something new like this, I search YouTube for videos that I can learn from. The first video I saw was brilliant, very straightforward, and made it look like a walk in the park. I settled down to make my first snow globe card, and then the second snow globe card! It was such a struggle and I couldn’t understand what I was doing wrongy! How on earth could I make a video? 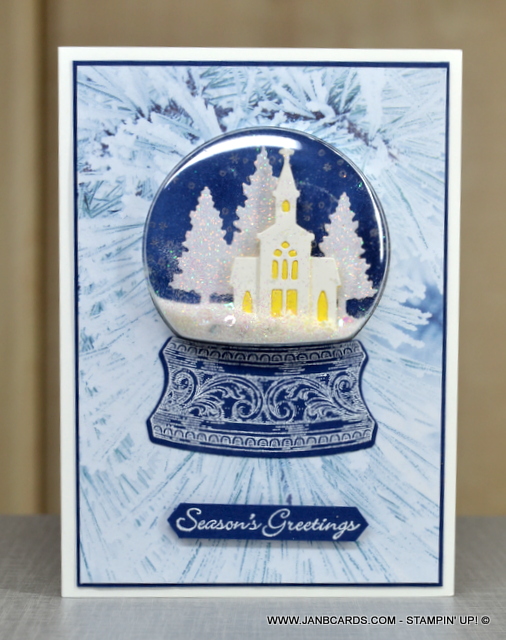 Fortunately I can be like a dog with a bone. After having a break and a cup of tea, I went back to YouTube and searched for more videos. I found a video that showed a different way of putting the actual globe onto the card. I settled down to make my third snow globe card, and whilst it was still a bit of a struggle it worked! Part of my problem was self-inflicted in as much as I like two layers on top of my card base. The videos I was watching had the card base and one layer. 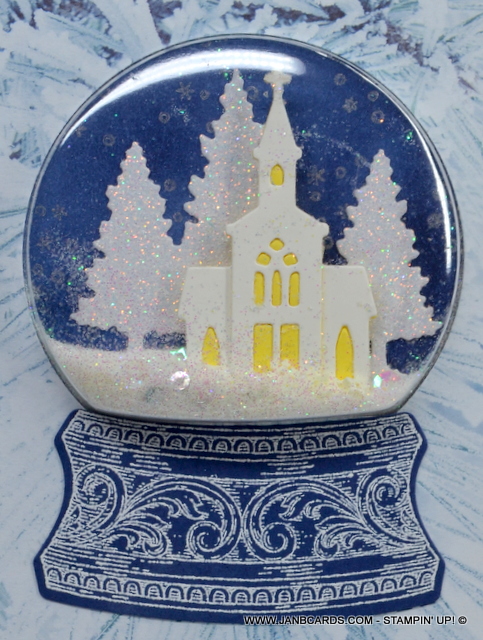 By now it was Saturday, and I was going great guns. I was making good progress with my fourth snow globe card when hubby came into my studio to talk about something, so I stopped for a chat. When he left, I carried on where I thought I’d left off! Ooops! I put the dome over the trees but had forgotten to put the Church in! Grrr! 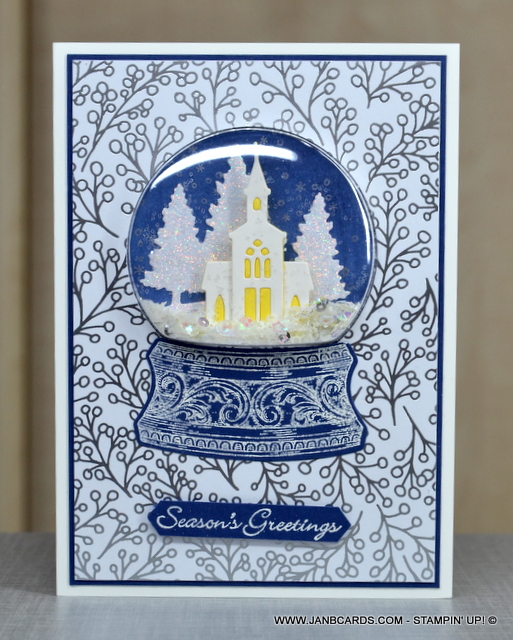 At least by this time, I’d completed the most difficult part which was fixing the dome between the top Designer Series Paper (DSP) layer and the concealed Whisper White layer, which completes the dome “sandwich! It was time to cut all the pieces I needed to make two more cards. One would be the last card before videoing, which acts as a reminder of the process and order of doing each step (which doesn’t aways work as you’ll see in the video! LOL!) and also to give me an idea of timing for the video, The second card is the card for the video. 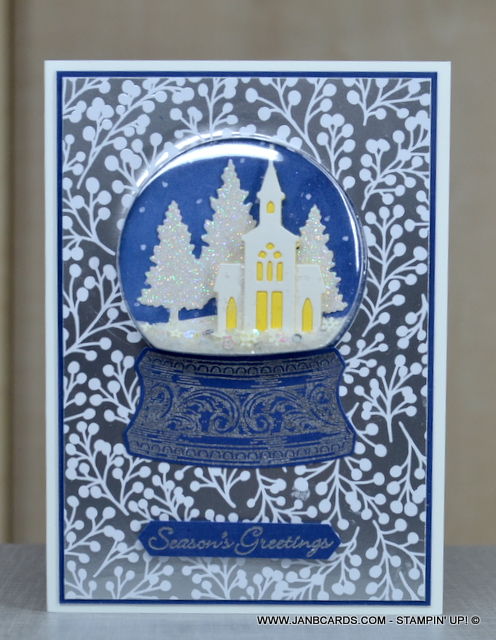 In the video, I forgot to put my trees and Church in place on the concealed Whisper White layer before adhering my dome into my DSP layer. It did teach me that whenever I make a snow globe card, I’ll cut two layers of DSP – one that I’m using for my card, and a retired DSP – so if I do forget and put my dome in too soon, I can add my trees and church – or whatever I’m using – through the retired DSP! If they are both cut at the same time, with the current DSP on top, it’ll work! 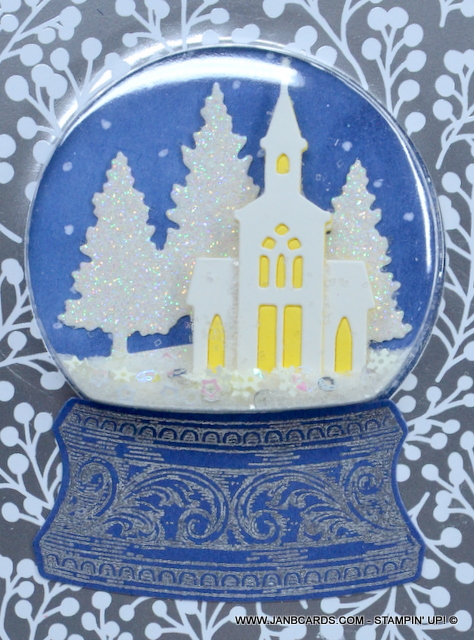 I used a white gel pen to put stars in the sky.

I have seen it recommended to wipe the inside of the dome with the Embossing Buddy before adding the “snow”, to remove the static. I did that on my first snow globe card only! My globe finished up with a misty look because I had been over-enthusiastic with my Embossing Buddy and I didn’t notice until after my dome was fixed in place! Since then I haven’t found the static to be much of a problem, but it is an option you may like to try, with caution! 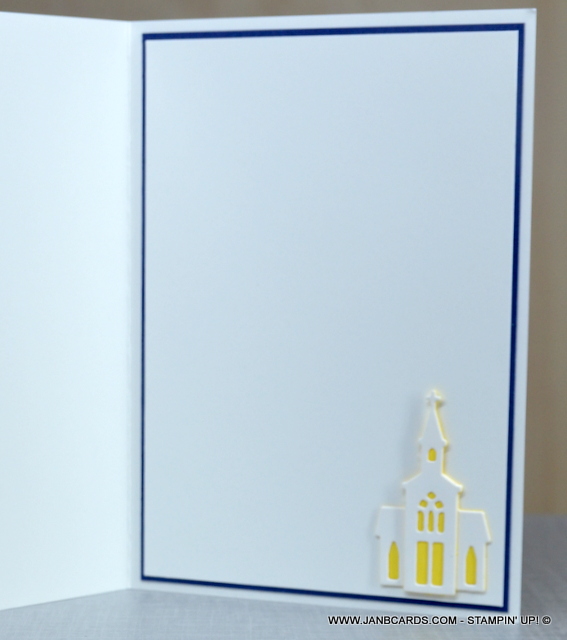 In the video I show an easy way to put the yellow “lights” behind the Church. It takes a few minutes but the results are brilliant. However, if this sort of job is akin to fussy cutting for you and it’s a no-no, you have options! You could leave the Church with open windows, or you could die-cut a reindeer instead, or you could die-cut the two polar bears instead. Whichever you choose, you can still use the trees, and fix the animals on Dimensionals to give depth to your scene. 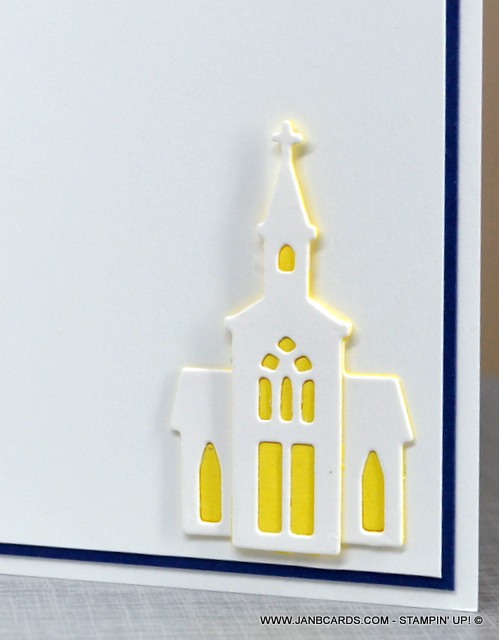 I hope you enjoy today’s video, and you give this card a go. Hopefully, I have shown you an easy way of adhering the dome into the layers, without getting ito a pickle. We’re off to Vicki and Leigh’s for lunch after Church today, and we’re going to meet the three new additions to their family! They are chickens called Jalfrezi, Nutmeg and Piri Piri – don’t ask! LOL!

I hope you have a very blessed Sunday and I look forward to being back with you tomorrow. In the meantime, happy crafting.

Products used for this project: please click on any of the links to be taken to my 24/7 online Stampin’ Up! shop. Thank you. xx