As we are near the end of November, a reminder that the Christmasime is Here Medley is still available while stocks last. If you want this set please order sooner rather than later to avoid disappointment. I’d also like to remind my customers that I will be sending them a Stampin’ Up! logo’d pop-up scrap bin if they place an online order during November that’s £30 plus, before delivery. The offer is one per customer, and while stocks last – although this is unlikely to be a problem! 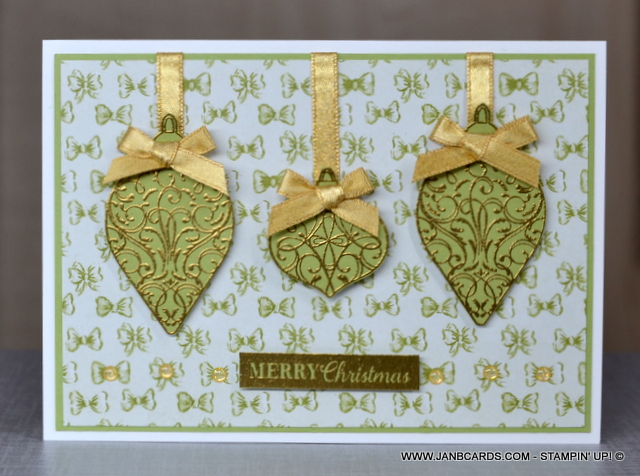 Today’s card uses the Christmas Gleaming Stamp Set and some Most Wonderful Time Designer Series Paper (DSP). The colours used in the DSP includes Old Olive, but I used Pear Pizzazz instead, and it worked beautifully. After I’d wiped over a piece of Pear Pizzazz Cardstock (CS) with my Embossing Buddy, I stamped three baubles – two large and one small – that had similar patterns on them, using Versamark. I also stamped the sentiment Merry Christmas. 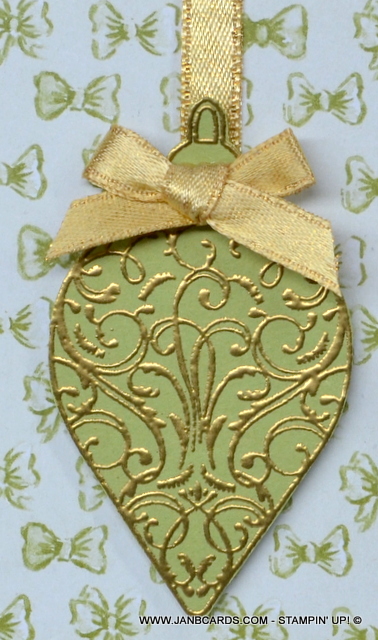 I dipped all four images in Gold Embossing Powder, and heat set them. After I had punched out the three baubles, I fussy cut the surplus Pear Pizzazz CS off. Next, using my large paper scissors, I cut around the edge of the sentiment! Using some ¼” Gold Shimmer Ribbon, I tied three small bows for the baubles. I also attached three straight pieces of ribbon over the back of the DSP and anchored it down on the front and back using SNAIL. 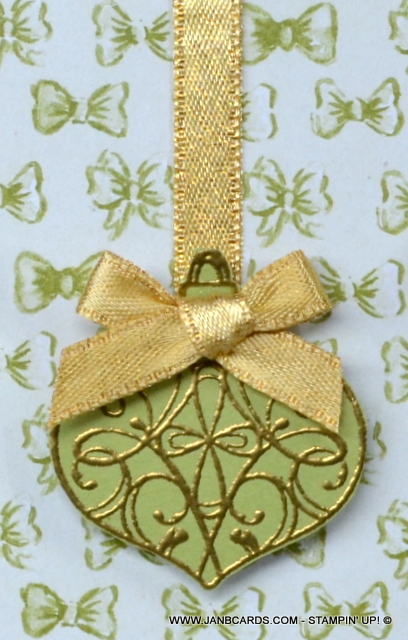 I adhered the baubles using Dimensionals, and for the small bauble I used double-layer Dimensionals so it stands out a bit futher than the two large baubles. The sentiment has also been adhered with Dimensionals in the centre towards the bottom edge of the card. Next I moved on to decorate the inside of the card, and started by adhering a layer of Pear Pizzazz CS and a layer of Whisper White CS.

I decided to use baubles to decorate the inside but only used the small one so I could save enough space for the sentiment and the greeting. I punched three baubles using the same DSP as on the front of the card. I wasn’t concentrating and punched the first two upside down! LOL! After finding more scraps of the design I needed, I successfully punched three the right way up, but they looked unfinished! 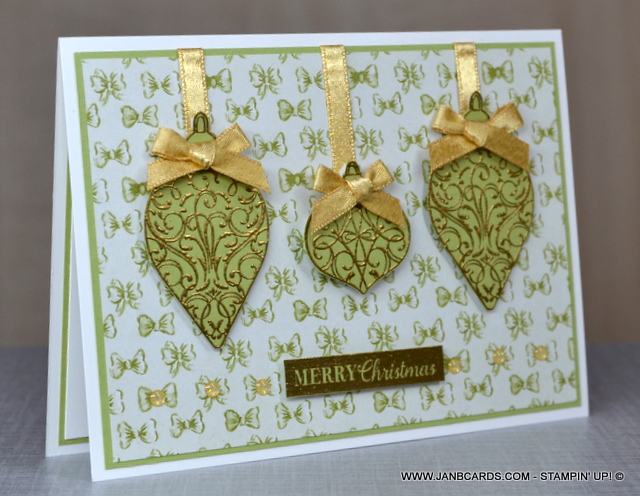 The edges of the baubles needed to be defined so I used my Pear Pizzazz Dauber and went round the edge, This gave a great result. To imitate the bows on the front of the card, I fussy-cut three bows from the DSP, and sponged the edges with the Pear Pizzazz Dauber as before. After I had adhered the bows to the baubles, I painted them with Clear Wink Of Stella Glitter Pen. You can see in the photograph how much it shows up! 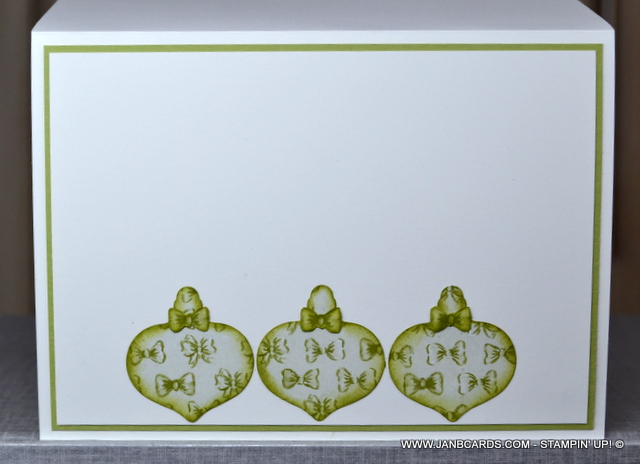 Quite often, even after I’ve finished a card, my mind carries on designing it! As I’m sitting here now, I can see the three baubles would look even better if I’d adhered half a bauble at the beginning of the line and another half at the end of the line. I’ve just tested my idea and they fit in beautifully! Guess what I’ll be doing later today, but sorry no prize for getting it right!

For the final touch I added one Gold Glitter Enamel Dot in the centre of the bows on either side of the sentiment. I was so lucky this was in the middle (height-wise) of the sentiment, although I could have done with something darker. Maybe I could paint them! LOL! That’s it for today. I look forward to being back with you tomorrow, and in the meantime, happy crafting.

Products used for this project: please click on any of the links to be taken to my 24/7 online Stampin’ Up! shop. The Hostess Code for November 2019 is G3944GAH. Thank you. xx