Have you seen the Shimmer White (149511) and Shimmer Black (149512) Stamin’ Emboss Powder that’s in the Annual Catalogue (page 181)? I bought a pot of each some time ago and yesterday was the first time I used one of them, i.e. the Shimmer Black. It’s absolutely gorgeous and so glittery! Tomorrow I’ll have to use the Shimmer White! The first photograph shows the glitter in the heat-embossing, glitter in the ribbon, and the Wink of Stella Clear Glitter on the snowman! 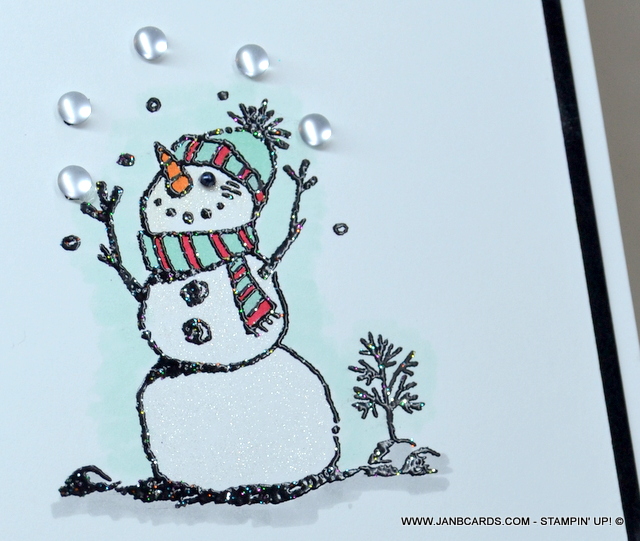 I had to tip the card to an angle for the camera to pick up the glitter!

If you watched my swaps video on Sunday, you may remember I’d received a black and white card and I said it would never have occured to me to use black for a Christmas card! Today was a good opportunity to give it a go because I was using the Shimmer Black Embossing Powder! The design of this card – the snowman and the sentiment – was inspired by another swap which had one Whisper White Cardstock (CS) layer on top of another layer of Whisper White CS with this design! 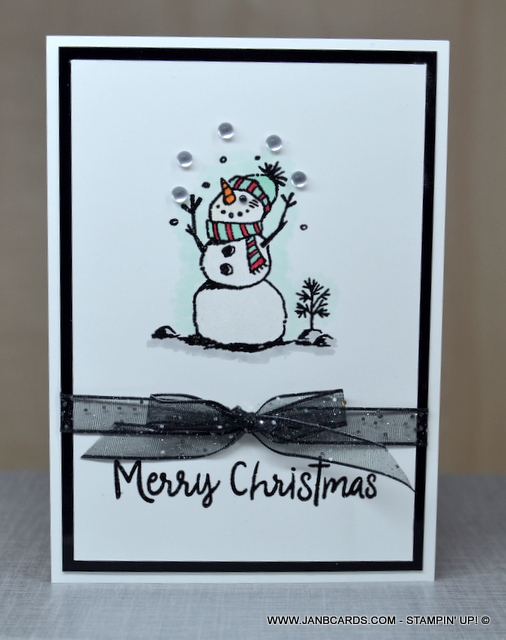 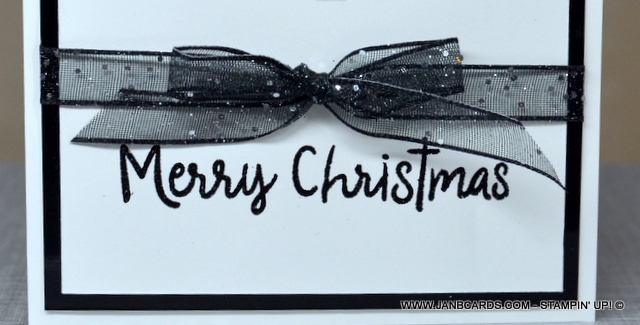 I cut my top layer 1/8″ shorter and narrower than normal – 5 1/4″ x 3 5/8″ – and made the Black Foil the same size as my normal second layer – 5 1/2″ x 3 7/8″. By doing this, I gave my card a wider border than normal, which helps to make the black really pop. After I had adhered the top two layers together, I tied a piece of the 3/8″ Glittered Organdy Ribbon in a bow, and positioned it between the image and the sentiment. 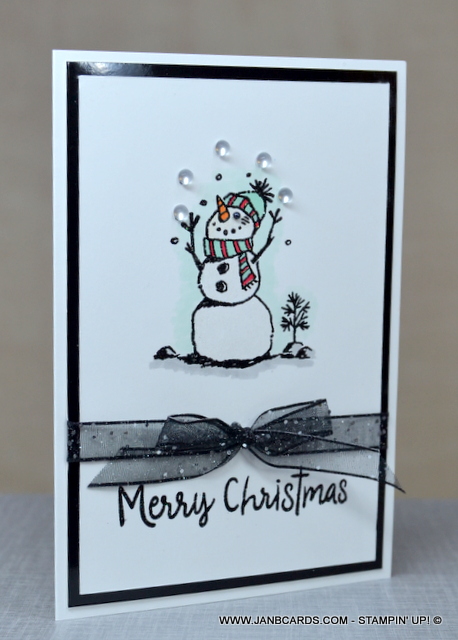 I wanted to add some gems, but I don’t like adding them randomly, so I had a look through my second box of gems which is called “Other Gems”. This box has everything that I can’t call pearls or rhinestones, and found these frosted gems. They are from the Annual Catalogue page 178 and are called Frosted & Clear Epoxy Droplets (147801). They come in a pack of 96 pieces, 48 of each finish in two sizes. The Frosted Droplets make excellent snowballs, don’t you think?! 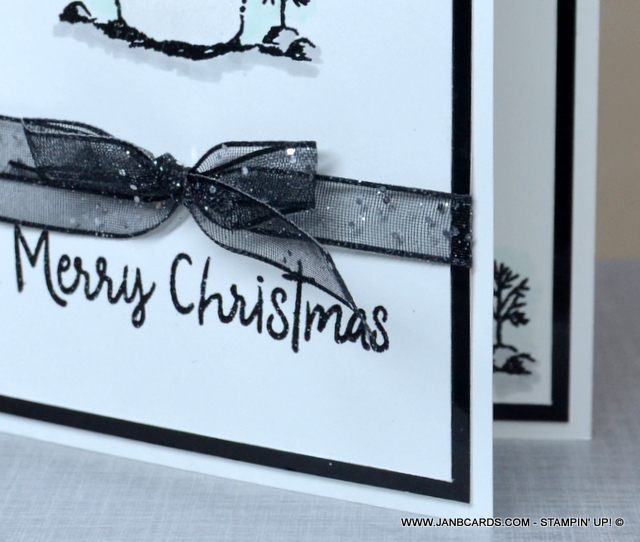 To decorate the inside of my card I added a layer of Black Foil and a layer of Whisper White CS – both are the same size as the corresponding layers on the front of the card. I heat-embossed the snowman image with the same Shimmer Black Embossing Powder. After painting the snowman the same as the front of the card, I painted his head and his body using the Clear Wink of Stella Glitter Pen. 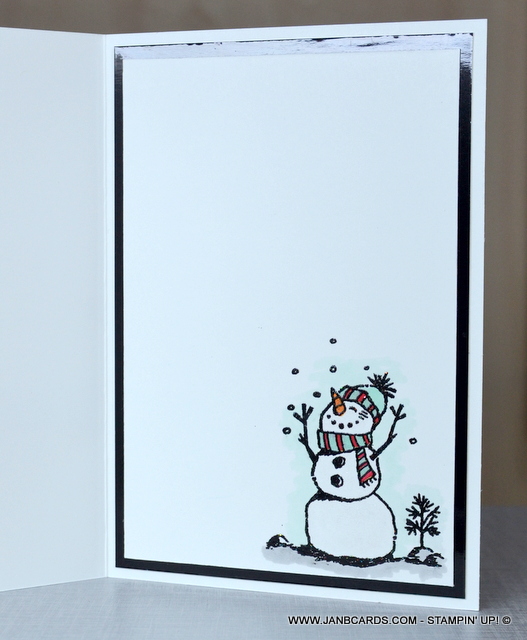 You may notice that the snowman on the front of the card has an eye whereas the snowman on the inside just has an eyebrow with a closed eye! I painted a very small pearl using the Dark Basic Black Stampin’ Blend, and adhered it in position using Tombow. It would probably look better if I’d used a very small punched circle because it would have been flat, but I’m leaving it as it is rather than risk damaging the cardstock by removing the pearl! 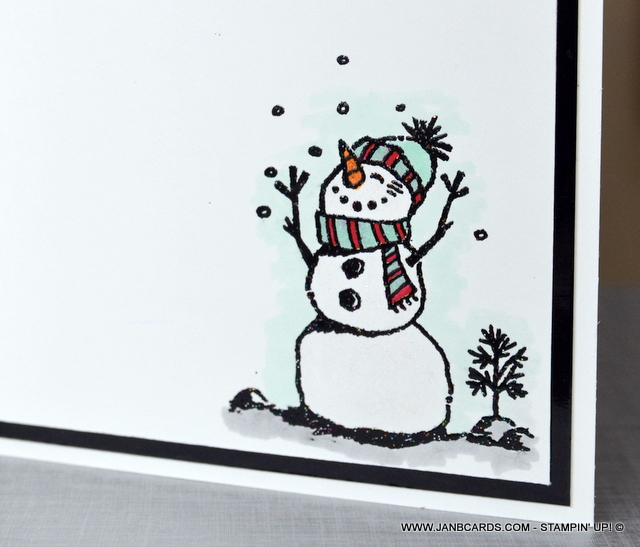 Yesterday’s card featured three gold heat-embossed baubles, and I adhered three baubles insert the card which I had punched from some DSP I’d used as the top layer on the front! As I was writing, I said I think the inside of my card would look better if I’d put baubles all the way across the bottom. Yesterday before I started working on today’s card, I decided to do it, and below is a photograph of what it looks like now. I definitely think it looks a lot better – what do you think? 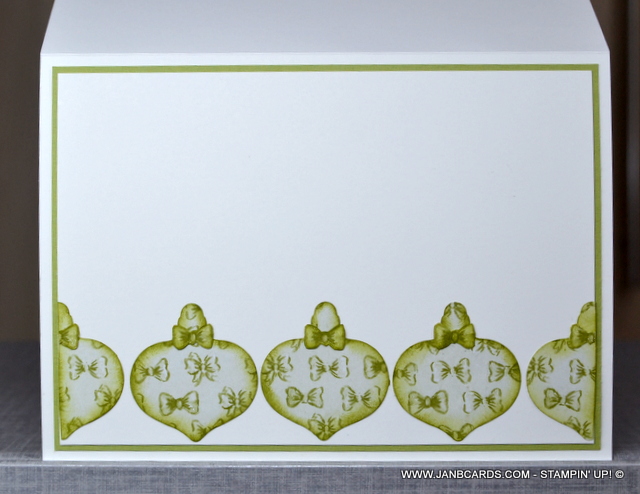 I think that’s about it from me today. I look forward ro being back with you tomorrow, and in the meantime, happy crafting.

Products used for this project: please click on any link to be taken to my 24/7 online Stampin’ Up! shop. November Hostess Code is G3944GAH Thank you. xx