First and foremost, don’t forget there’s free delivery on your Stampin’ Up! orders today that are €40/£35 and over! Now’s the time to stock up! Free delivery is available until 10.59 pm in the UK and until 23.59 in Europe. 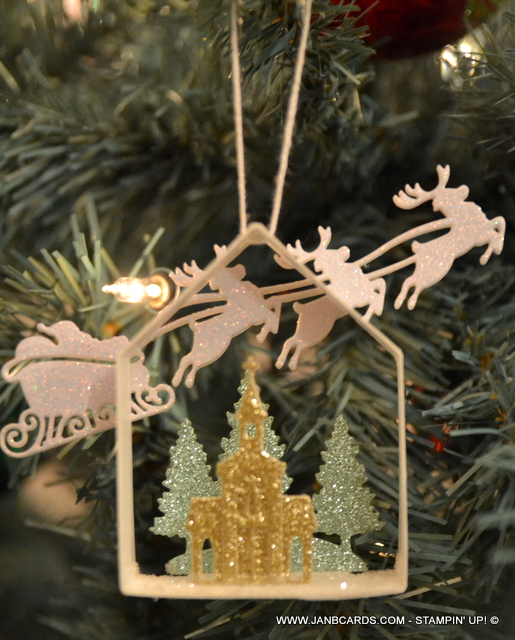 As so frequently happens, my day yesterday didn’t turn out quite as planned, so I wasn’t able to play making these tree ornaments for as long as I was hoping to! Instead, I concentrated on this design which has been in my mind since I started working on this project on Monday. I’m not planning a video so I’ll give you the measurements and score lines in case you’d like to have a go yourself. 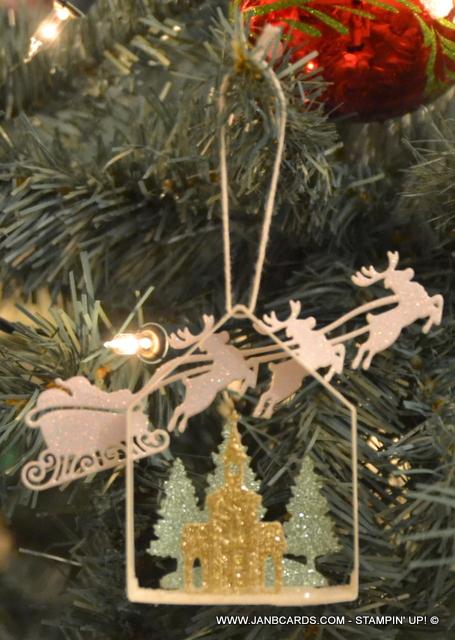 The first change I made from the ornaments I made on Monday was to make the house frame with two layers of cardstock to give a lot more strength. I took two pieces of Whisper White Cardstock (CS) that measured ¾” x 10½” long, and scored each piece at 2 3/8”, 4 3/8”, 6”, 7 5/8”, 9 5/8”. After folding on all the score lines I put the two pieces together – so they were spooning – to make sure they were scored correctly. Using Tombow, I glued the first 2 3/8″ pieces together. 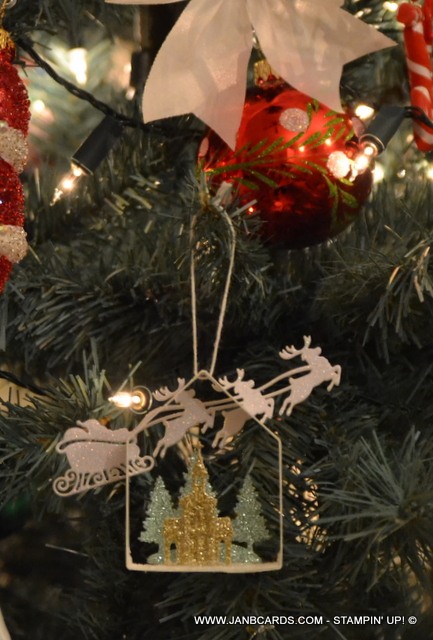 Next I put glue on the remainder of one strip on the inside, and applied pressure all the way along. I re-inforced the score lines, and glued the last ¾” to the underside of the 2 3/8″ base. You will probably find that one piece of cardstock is a bit longer than the other – this is normal. I was amazed at how very much more sturdy the house was with two layers! If you’re following my instructions, punch two 1/8″ holes at the top of the roof now – it’s really difficult to do it later! LOL! 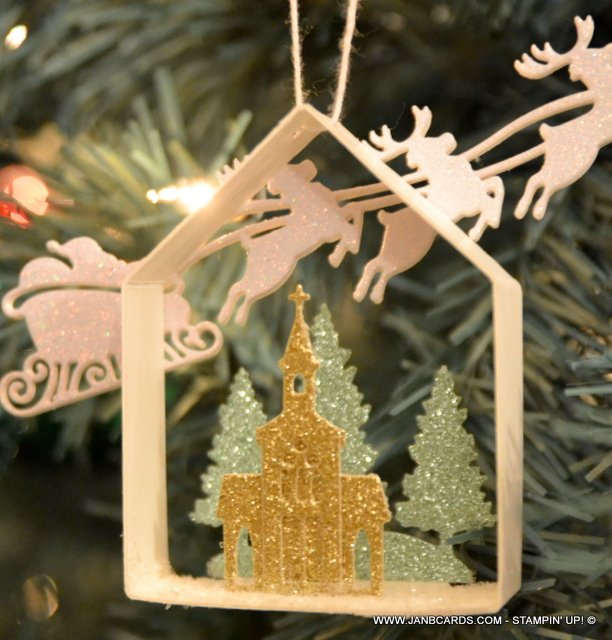 I prepared the Santa with the reindeers, which is from the Jolly Season Dies, by diecutting one in the Sparkle Glimmer Paper. To make this more sturdy, I die-cut four more images using some Thick Whisper White CS – use 5-6 layers if you’re using the regular Whisper White CS. I adhered all the layers tgether and then the Glimmer Santa on the top. 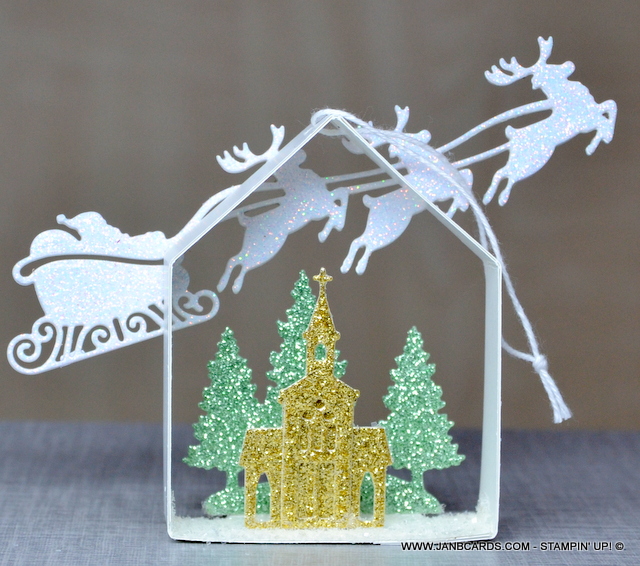 I know it’s Stampin’ Up Glimmer Paper, but I don’t remember when this green one was on offer. I only had some scraps but one was big enough for my trees, and I found some Gold Glimmer Paper scraps for the Church as well. With hindsight, I should have made some plain whites images to adhere on the back for extra strength, like I did with Santa. I placed the tree die from the Snow Globe Scenes die over the straight edge, which saved me from having to cut the bottom straight. 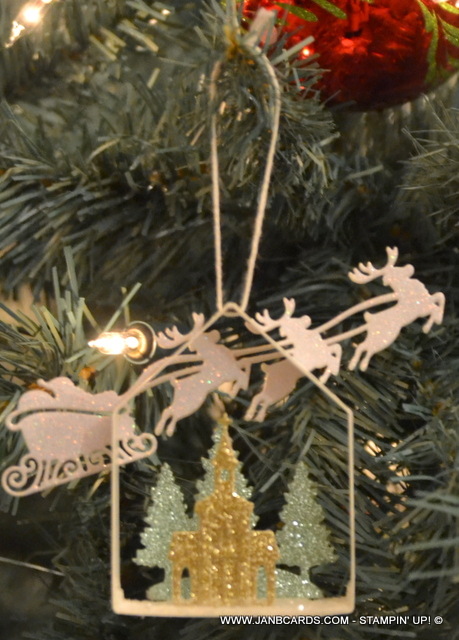 I added “tabs” of Whisper White CS to the trees and the Church, so I could adhere the images to the base of the house. The tab on the church was about ¾”, and the base was about ½” long. The height of the cardstock behind the trees was about 3/8” tall and ¾” wide’. Once both pieces were adhered to the base, I put a small splodge of Tombow on my Silicone Craft Mat, and used a cotton bud to spread glue all over the house floor. Then I sprinkled all over with Ice Stampin Glitter. 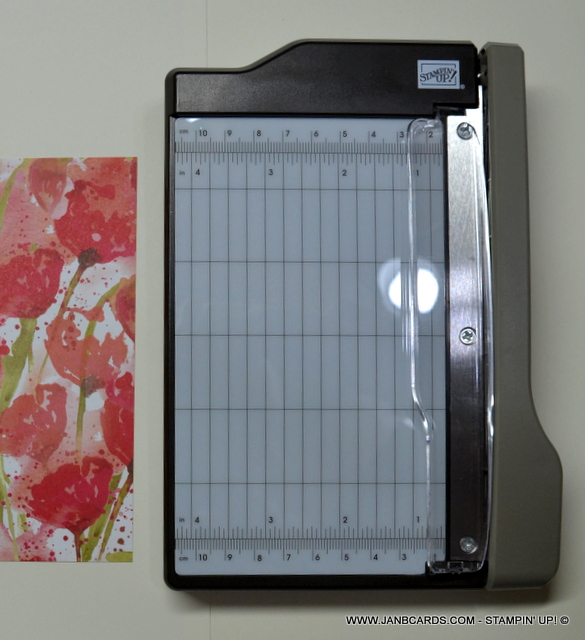 Adhering Santa and the reindeer to the back of the house was a lot easier than I expected. I put Tombow all along the edge of the roof at the back! Using my Grid Paper as my guide, I placed the back of the house, onto the front of Santa. I used a couple of my larger punches to sit very carefully on the front of the house. I left them there quite some time to allow Tombow to dry properly. The final job was to put some white Baker’s Twine through the holes at the top. I thoroughly enjoyed making this project and have other ideas, but I’ll be back to making Christmas cards tomorrow. If I do make any more house ornaments I will share them as well as the card.

Before I go, I want to explain about the special recruiting offer that will be available during Sale-a-bration (SAB), i.e. 3rd January to 31st March 2020. I’m sharing today because yesterdy I recieved the pack new recruits will receive in their Starter Pack. Demos have been allowed to buy a pack now so we can explain to new recruits about what they will receive. Stampin’ Up! are not planning to sell these packs after SAB, so the only was to get them is to become a demo now and buy one, or join during SAB!

The offer is the usual join for €129/£99 and choose products to the value of €175/£130. New recruits can also choose any stamp set from the Annual Catalogue. They will receive the regular business pack, plus this fabulous Mini Trimmer, as well as this 48 sheet sampl pack of new Designer Series Paper (DSP) – it’s equivalent to receiving 12 full sheets of DSP! The Mini Trimmer is so dinky it’s great to have on your desk. I had it on my desk while I was making today’s tree ornament and found it so easy to pick up, cut  a straight line, and put it down again!

That’s it from me today. I look forward to being back with you tomorrow, and in the meantime, happy crafting.