I hope you’ve had a super weekend, and are looking forward to another short week! ☺ Did you see yesterday’s video where I showed how to make a quad easel card? In the video, I suggested that the Come Sail Away Designer Series Paper (DSP) would make a great masculine version of this card, and since then I’ve been itching to make one! 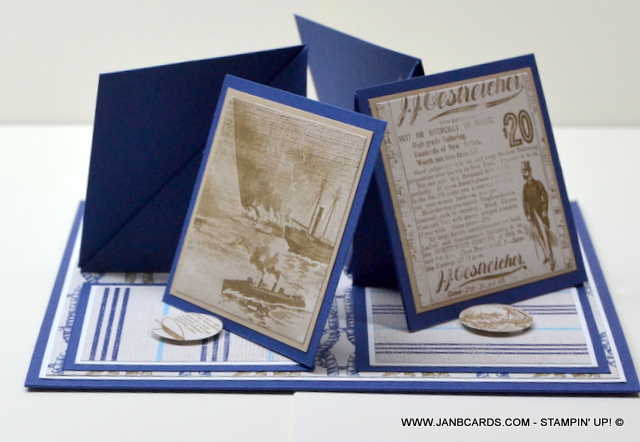 Yesterday Hubby and I started clearing up after Christmas, which means he started taking the lights and decorations down, and I start finding homes for our presents. Inevitably, this means I start clearing out cupboards to make space! I must confess that I’m a bit of a hoarder but once I start clearing out I can be very ruthless, and yesterday was no exception! 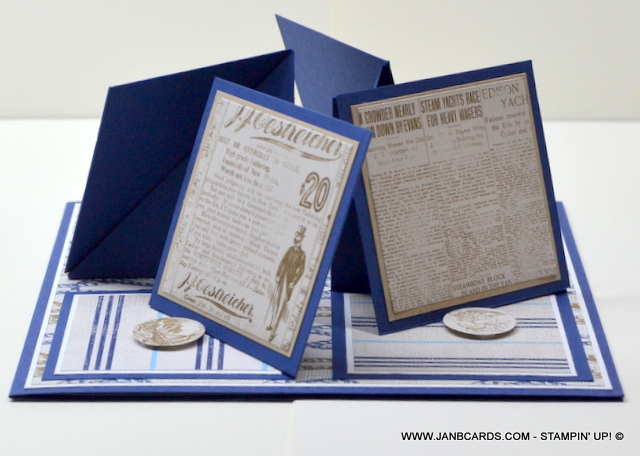 I’ve cleared out so many clothes, loads of belts, Christmas decorations and other bits and pieces, I’m going to need Hubby’s help to get it all into town to our local Scope Charity Shop! We also have three cabin-sized cases and a medium-sized suitcase that we are donating to the charity, so I have packed them all full with the clothes, and have also started a huge Christmas carrier bag for the rest! 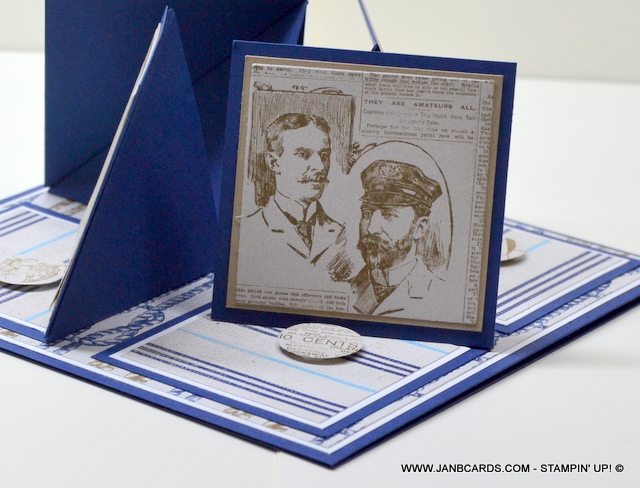 Back to today’s card! During the video, I said I’d use Crumb Cake and Soft Suede Cardstock (CS) but when I started getting everything together, I decided Night of Navy and Crumb Cake would look much better. I changed my mind because the easel card uses three different designs of DSP, and both the non-picture designs include Night of Navy with Crumb Cake, which is something I hadn’t thought about before! It has worked out brilliantly! 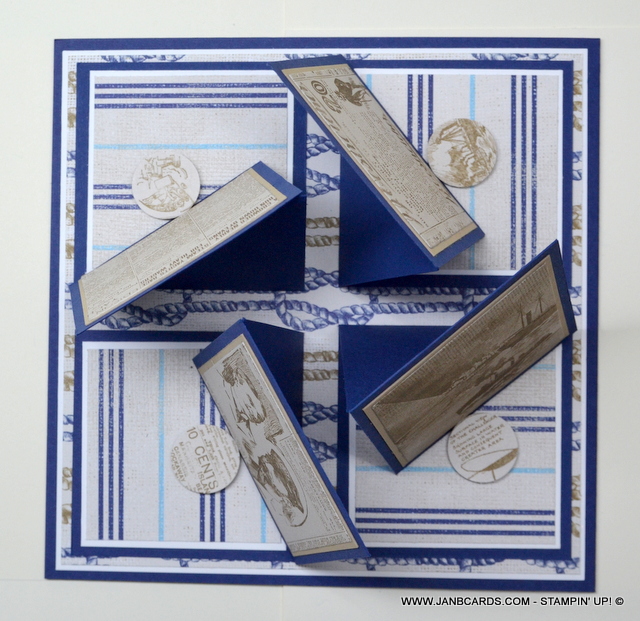 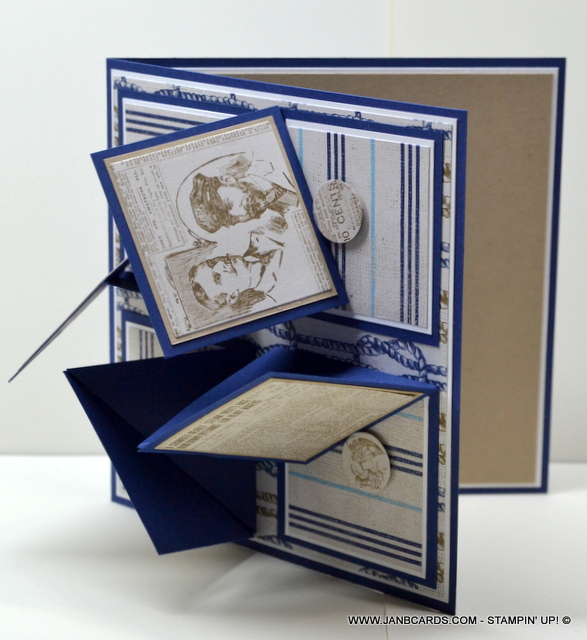 I chose the easy way so when I look down on the stripes they follow each other around the card base. Although the other way would have shown all the lines going in the same direction, I felt it would have been easy to get confused and end up with one – or more – wrong, which would spoil the whole look of the card. As it is, I’m very pleased with the finished result. 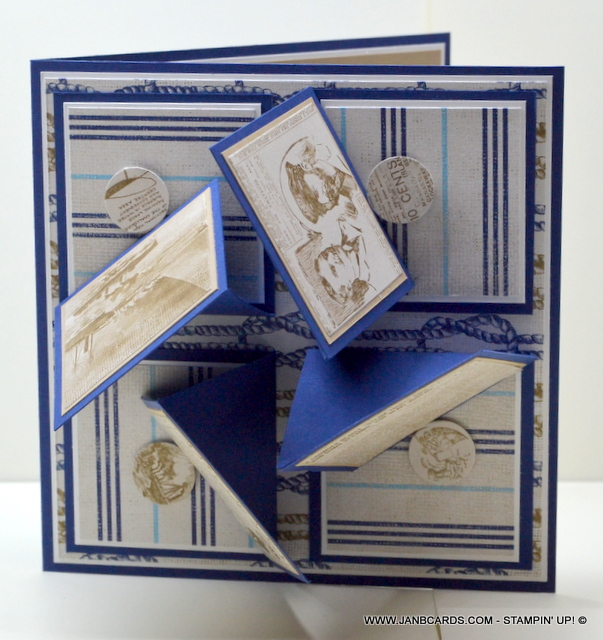 Another suggestion I’d made about a masculine card in my video, was to use the circles that could be seen on the sheet of DSP. When I came to make the stoppers, I decided to come up with another idea because I needed four stoppers and there were only two circles on each sheet which would have been such a waste. Instead, I took a three-quarters of an inch circle punch and punched out four sensible circles! I hope you can see what they are in the photographs! 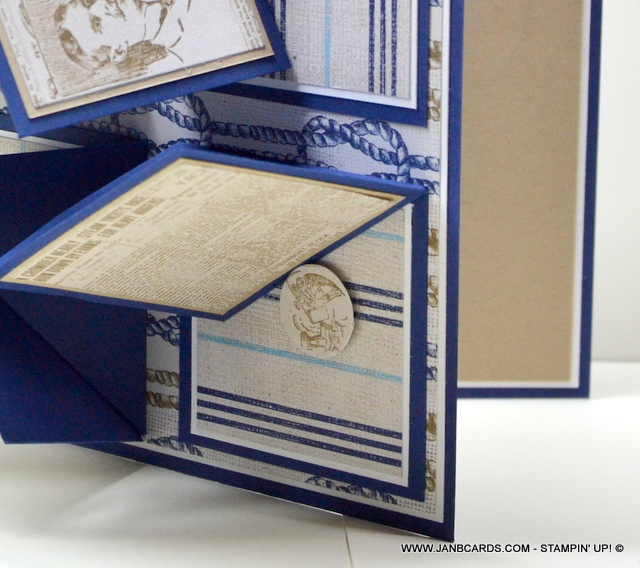 Final tip! If your card is for someone who sails, you could adhere a Sail Away Trinket onto the stoppers – they fit beautifully! I’d still punch circles from the DSP; plain white would look too stark.  As I suspected, the Come Sail Away DSP has made a great masculine card! I have someone in mind that I’ll be sending mine to and will personalise the inside the card. That’s it from me today. I wish you a marvellous Monday and look forward to being back with you tomorrow. In the meantime, happy crafting.

Products used for this project: please click on any link to be taken to my 24/7 online Stampin’ Up! shop. December 2019 Hostess Code is RVWA74X3 Thank you. xx