Yesterday I had some fun playing with the Mini Curvy Keepsakes Box. I wanted to see what it would look like made with the Mercury Glass Specialty Acetate, and I wasn’t disappointed. I think it was on Wednesday that I said I wish we could have this product, maybe with different designs, as a regular offering in the catalogue! I made one in each of the two designs we have. 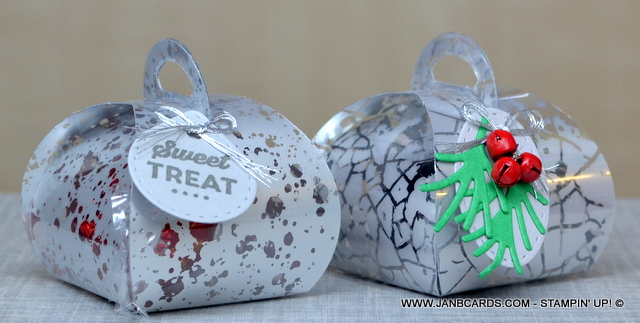 I used the crackle-like design to make my first box. If you haven’t used this Acetate before, I recommend that you remove the plastic protection sheet before you try cutting it. If you run your finger tip over each surface slowing, you will feel that one side is totally smooth, and on the other side you can feel the slight ridges between where the crackle pattern starts and ends. 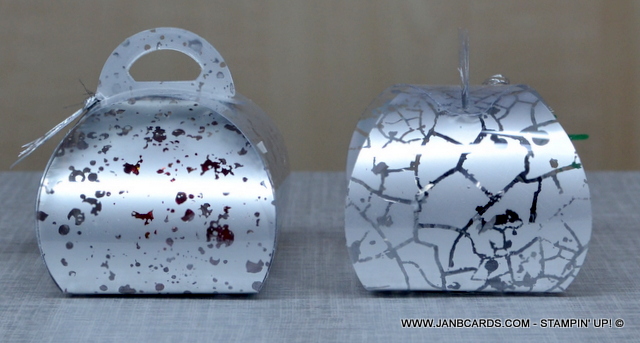 I put a battery-operated tea-light in one of the boxes but wasn’t overly impressed because although it gave a very pleasant all over glow, it was easy to see the tea-light inside. Next I tried a Lindt Chocolate and was surprised I could only fit one inside. To decorate the first box I die-cut two small branches using Call Me Clover Cardstock (CS). I’m not sure where I bought the red bells from, but I do know they aren’t this year’s Stampin’ Up! bells; mine are far too small! 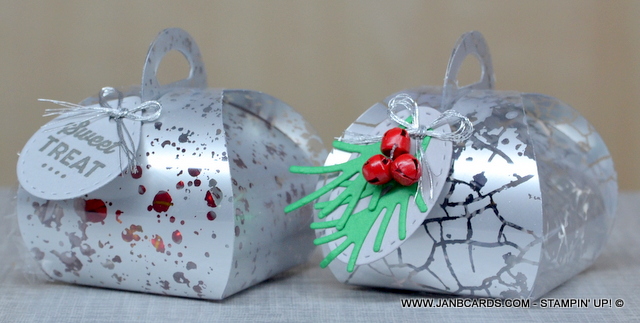 I adhered the leaves and bells on an oval stitched tag that I’d die-cut in Smokey Grey CS using a die from the Mini Curvy Keepsake Box Dies. To make the silver twine, I took a very long piece of Silver Thread, folded it in half, then in half again, and then I twisted all four lengths together. To avoid tying the twine around the handle, and stopping the box from being opened, I tied a small bow, adhered it over the hole at the top, and then adhered the tag to the box using Glue Dots.

To make the next two boxes I used some Feels Like Frost Designer Series Paper (DSP), one with a white background and silver design, and the other one with a silver background with a white design. I made two Whisper White tags with the same sentiment I’d used on the second Acetate box, but heat embossed it using Silver Embossing Powder. This time I used some Baker’s Twine to tie the tags to the box, and I left it long enough so it can be easily undone and re-tied to close. 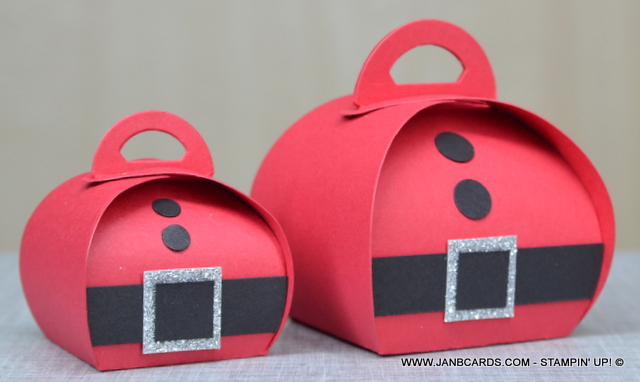 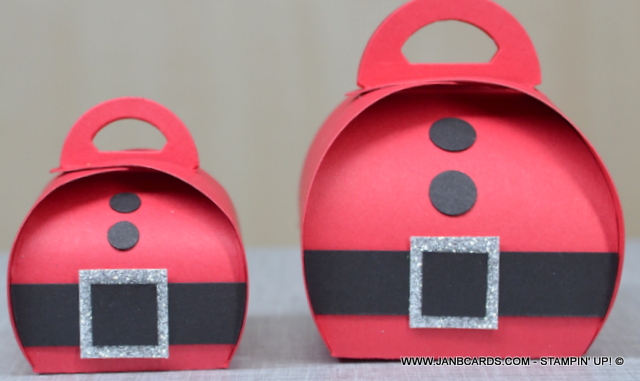 Ooops! I went off on a tangent then! The reason I made one of the retired boxes was so I could show a photogrph of them side by side. If you have the original box, or maybe did have it, I thought you may like to see the difference in sizes. Although I haven’t tried it, I imagine it’s possible to get five or six Lindt Chocolates in the larger box. 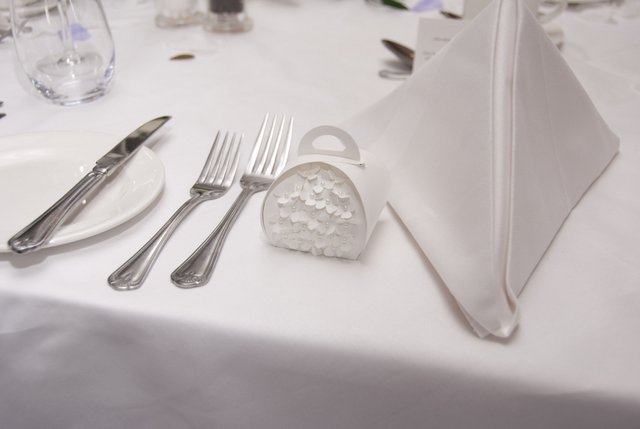 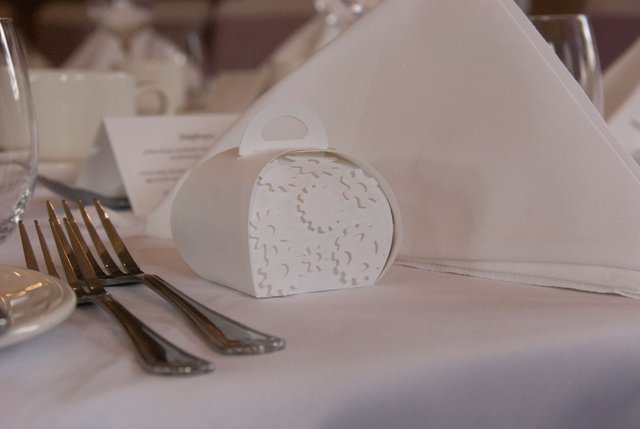 There were so many different projects we made when the original box came out, that I’m sure we can still do them but smaller! I had a look on Pinterest yesterday and it was a wonderful walk down memory lane seeing so many projects that I remember. There were also some designs that I didn’t recognise, so they may have been made with the new box. I should have stayed and taken a bit longer looking at when these were created, but I didn’t think about it at the time!

Anyway, that’s about it for today. I look forward to being back with you tomorrow, and in the meantime as always, happy crafting!

JanB.
Products used for this project: please click on any link to be taken to my 24/7 online Stampin’ Up! shop. December 2019 Hostess Code is RVWA74X3 Thank you. xx