Yesterday I was playing around with two ideas for cards for tomorrow’s video, but then I made today’s card and decided on this instead! I still need to add a sentiment, and I’m now out of enough Brightly Gleaming Designer Series Paper (DSP) to make another card like this. To get round this I will have to choose a different DSP. This would allow me to change my colour combo, but I can’t see this working in red or green. Time will tell! 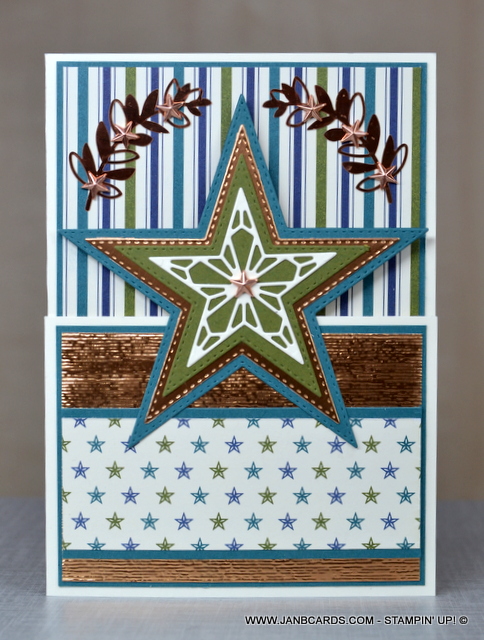 My card was inspired by something I saw on Pinterest made by Michelle Wright. Although my card is very similar to Michelle’s, I have made several changes. The first job I needed to do was to see how much, and which designs, I had of the Brightly Gleaming DSP. Did you know this is going to be carried over to next Christmas, along with the Feels Like Frost DSP? 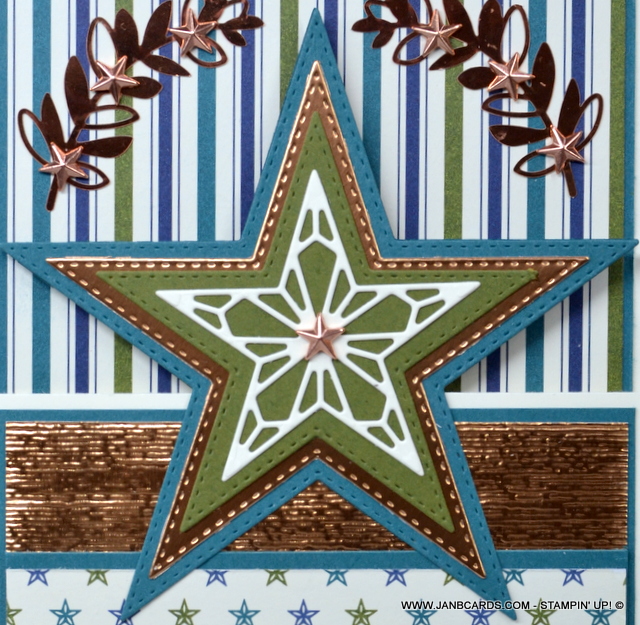 Once I had cut the barn door, I was able to work out the measurements and cut all the layers I needed. I rested the layers on my card base in their correct positions which was a great help in deciding which colours to use for the stars. I struggled with this because I don’t normally go for dark colours. Over the years I’ve re-assured myself that if Stampin’ Up! have put these colours together, they must go together! LOL! 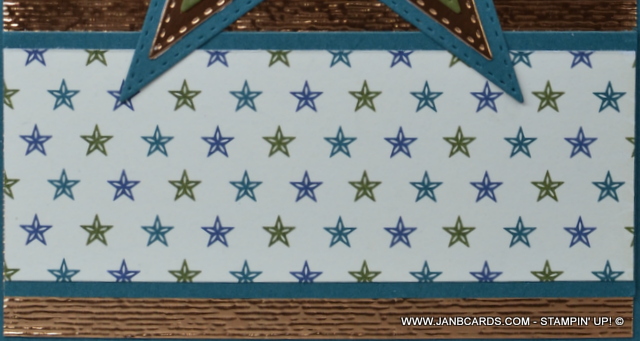 When I had finished the star on the front of the card I had to decide if I was going to leave the back of the star as it was or cover it with a matching star. I decided it would look perfectly okay if I left it as it was, but it would look so very much better if I covered it! After I had completed the second star and adhered it on the reverse, I knew it was the right decision! Next I had to decide how I was going to decorate the striped area behind the star when the card was closed. 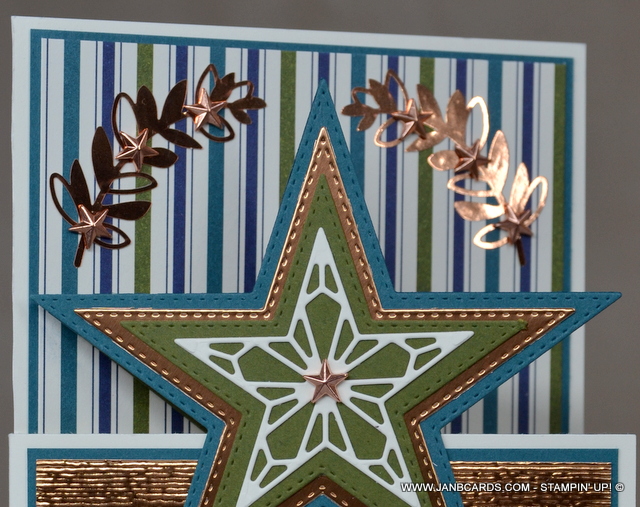 I decided to use some of the elements from the Brightly Gleaming Foil Elements because they included some non-stars embellishments, I used two branches and decorated each branch with three Star Designer Elements. Up to this point I was really pleased how my card was developing, but then I decided I wanted to put a star on the inside of the card which would be hidden when the card was closed. 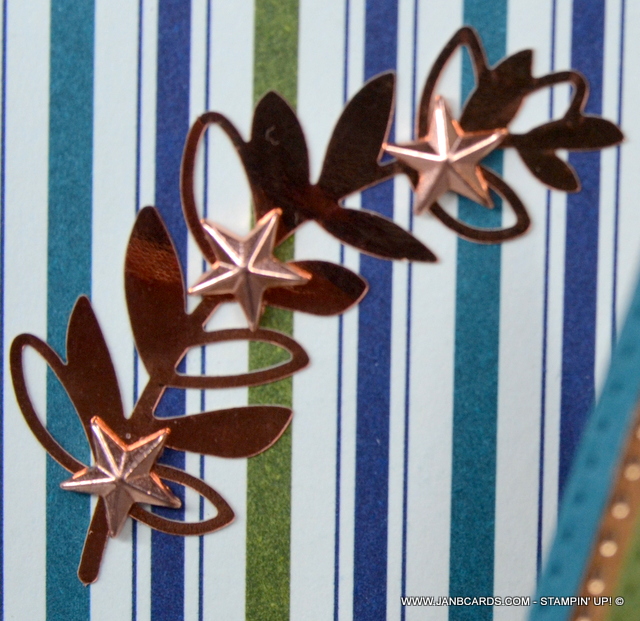 My first star was the same size as the second star on the front of the card, i.e. smaller, and then I adhered an embossed Copper Foil Star I’d created for the front of my card. I finished off with a Very Vanilla Star. I laid it in position, on my card, held it up so I could see what it looked like when the card was opened! I wasn’t overly keen on it, partly because it was encroaching on the area for writing the greeting. 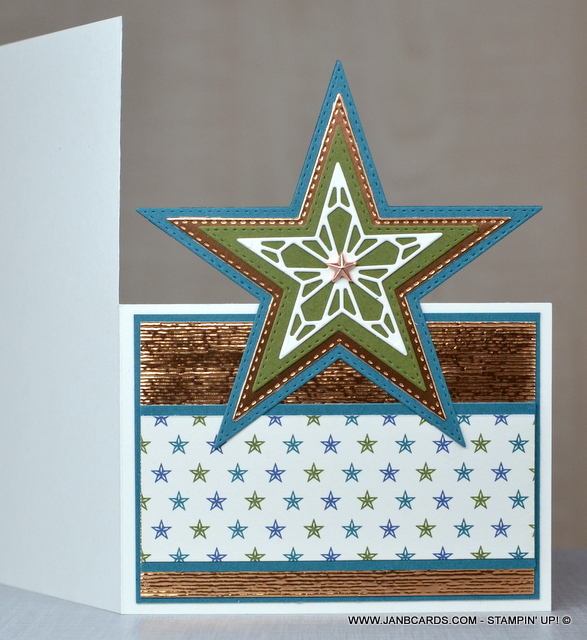 I decided to cut the star in half, more or less, and adhere it as if it was disappearing down behind the Very Vanilla Cardstock (CS). Unfortunately, I adhered the star onto my card before I decided I didn’t like it. I tried pulling it off but I could see I was damaging the DSP behind so I pushed it back down again! Overall, I’m very happy with today’s card, and with a bit of fine-tuning today, I’m going to make this card tomorrow’s video! 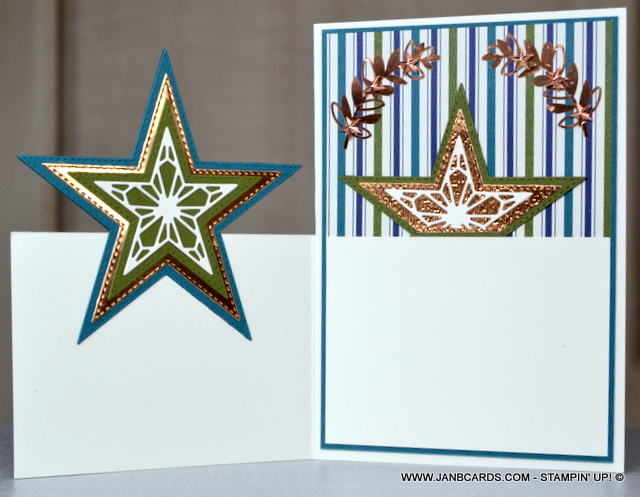 I’m not sure what DSP I’ll be using, but I will choose something that will go with the Copper Foil Elelents as well as the Copper Stars. I will also be adding a sentiment on the front of the card, and I’ll re-design the DSP layer inside the card to replace the star. I have an idea which I can work on and there are other Copper Foil Elements that I can bring into play, if necessary. 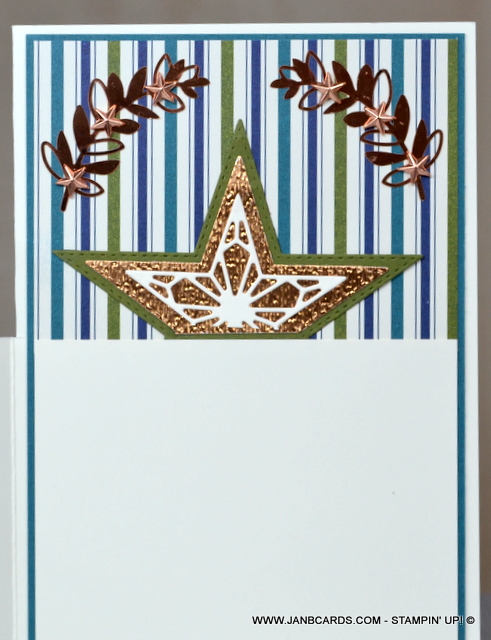 I thinks that’s about it for today. I hope you have a fabulous weekend, and I look forward to being back with you tomorrow. In the meantime, as always, happy crafting!

Products used for this project: please click on any link to be taken to my 24/7 online Stampin’ Up! shop. December 2019 Hostess Code is RVWA74X3 Thank you. xx