I hope you’ve had a super weekend. Last week one of the ladies in my team posted a colour challenge on our team Facebook page. When Val told me what the chosen colours are, I have to confess my heart dropped! This was a challenge in the real sense of the word, but then if it’s easy it’s not a challenge! Right? I kept turning the colours over in my mind trying to come up with an idea! I believe Val also shared this challenge in my Happy Crafting Facebook Group. If you are a member, please join in! 😍If you’re not a member, I’d love you to join us: https://www.facebook.com/groups/JanBHappyCrafting/about/ 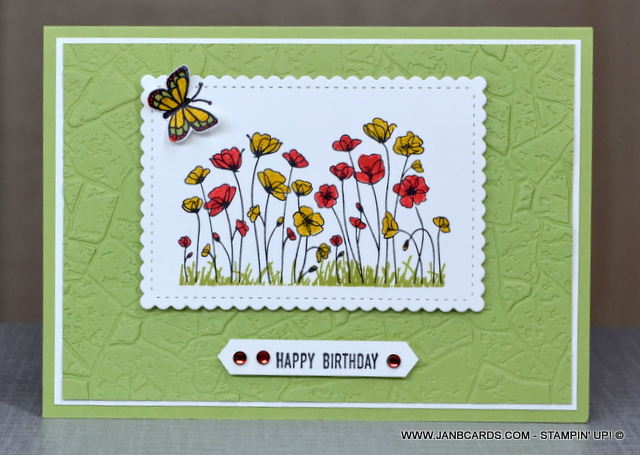 My first thought was to check the Designer Series Paper (DSP) I have to see if any of them had these three colours! No such luck! The closest I came was the Peaceful Poppies which has Poppy Parade, Crushed Curry and Old Olive. I always think of Pear Pizzazz as being a lighter version of Old Olive, but I dismissed the DSP idea as cheating! Then I remembered a card another lady in my team shared in the group last week! 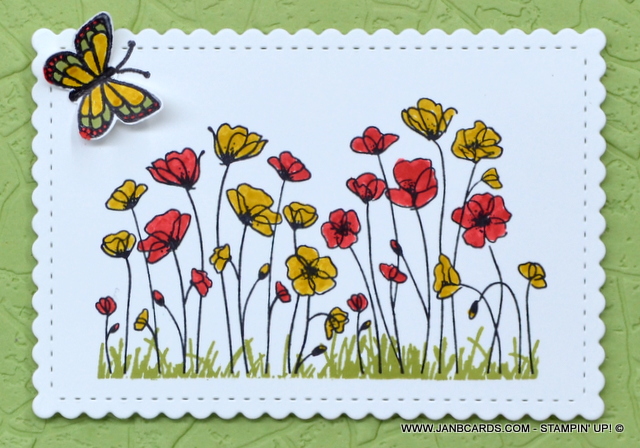 Amanda had used the poppy stamp I’ve used for my card but she had coloured them more like a rainbow, and she had also coloured the sentiment similar to a rainbow. It was a very striking card which had stayed in my mind. I decided I’d do Poppy Parade and Crushed Curry poppies with Pear Pizzazz grass – I know they grow happily together because we have both these colours in our garden!

I stamped the poppies image onto a piece of Whisper White Cardstock (CS) using Stazon. Although I’d preferred to do the colouring using Blends we don’t have them in Crushed Curry. There isn’t any pattern to which pansies I painted Poppy Parade or vice versa, although I did check to make sure if there was more than one flower on a stem, I kept them the same colour. Next, I checked through my stamp sets looking for a grass stamp. 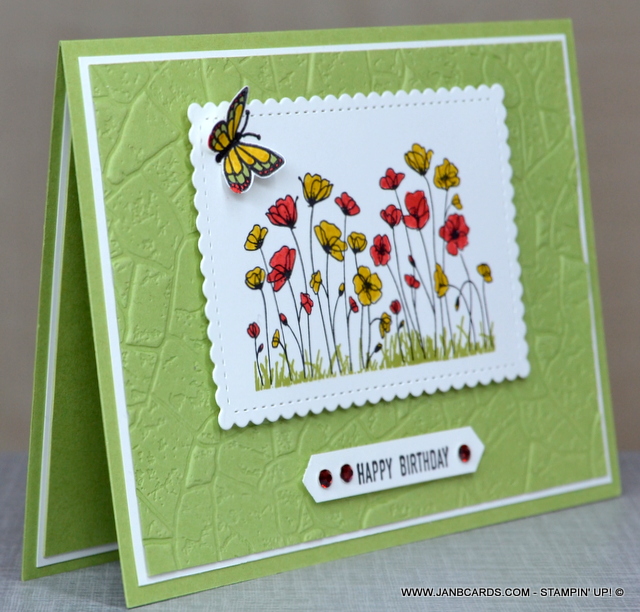 I found exactly what I wanted in the Enjoy Life Stamp Set, except I didn’t want the grass as tall as it was on the stamp. To achieve the effect I wanted, I used large PostIt Notes to mask off where I wanted the grass to end. Next, I die-cut the image using the no.5 die from the oblong Stitched So Sweetly Dies. I took a Pear Pizzazz CS card base and added a layer of Whisper White. Before I added a top layer of Pear Pizzazz CS  I embossed it using the new Stone 3D Embossing Folder. 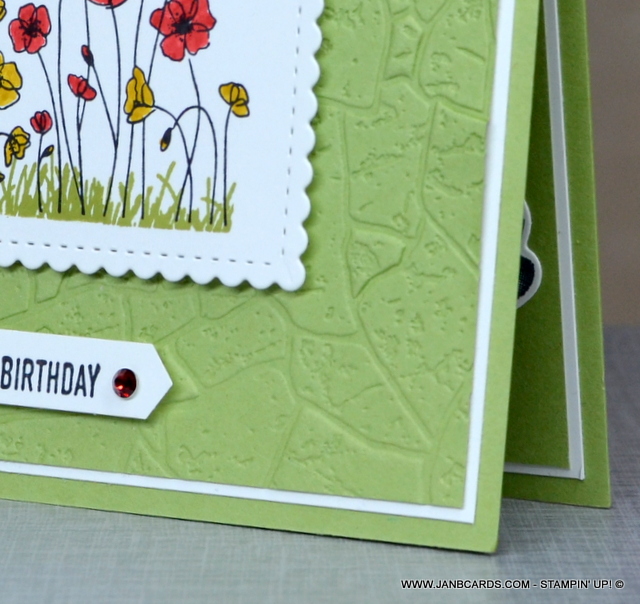 I used Dimensionals to adhere the image and the sentiment on the card front. The HAPPY BIRTHDAY is from the Itty Bitty Greetings Stamp Set. To finish off the front of my card I stamped a small butterfly from the Butterfly Gala Stamp Set and coloured it in the three challenge colours. After I had punched it out with the Butterfly Duet Punch, I added the black body, and after I had adhered the butterfly body to the image, I stamped on the antennae. I added three Cherry Cobbler Rhinestones to the sentiment. They were from the Holiday Rhinestones that were in the Christmas catalogue. 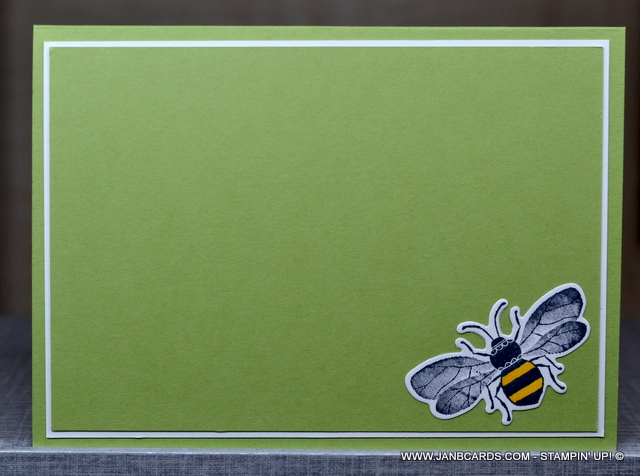 To decorate the inside of the card I added a layer of Whisper White CS and a top layer of Pear Pizzazz CS. I can hear you asking why on earth did she decorate the inside with a bee?? Well, before I made the butterfly for the front I had added a small bee. Then I went on to decorate inside and added a large bee, but once I went back to the front of the card I decided I didn’t like the bee, but I’d already adhered the large bee! Grrr!! I’m not sure how I will correct this. My first thought is to put another Pear Pizzazz CS layer over it, or add stripes in the three challenge colours as a decoration to cover it up. I’ll think about it during the day!! 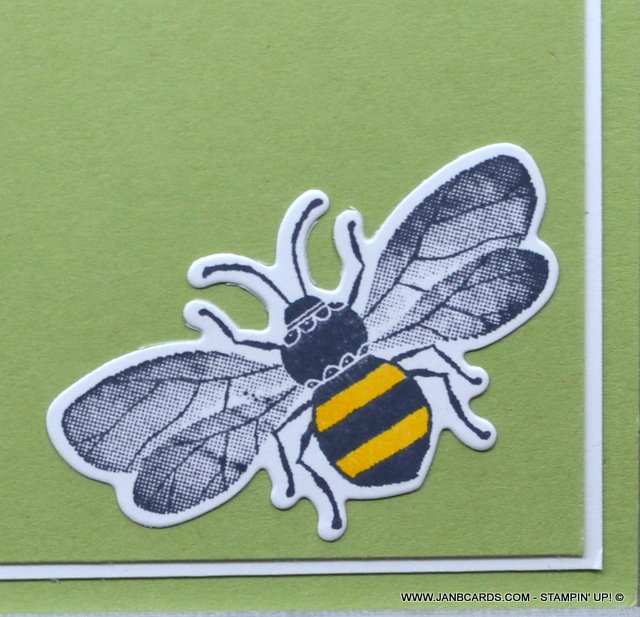 Yesterday evening, hubby showed me a news item he had on his iPad about some WW11 bombs that have just been found in Dortmund. If you were following me in November, you’ll remember that’s where we went for the Stampin’ Up! OnStage Convention! According to the news report, 30,000 people were evacuated from their homes, and included 58 patients in two local hospitals! Apparently, abnormalities were noticed during construction work in the city centre. Yesterday, work was started on digging to locate the bombs! My prayers are with everyone affected, and that the bombs are found and neutralised without any problems.

That’s about it from me today. I hope today is the start of a great week. I look forward to being back with you tomorrow and in the meantime, happy crafting.