Yesterday I used the Dressed to Impress Stamp Set and created what I think is a great card. When this stamp set first came out, we were given it as one of our make-n-takes at OnStage in Dortmund last November. When I shared what we’d made, I said I wouldn’t be ordering the stamp set but I would be buying the dies because one of them makes a super little bag. I wasn’t concentrating when I went to order the dies; I ordered the stamp set instead! DOH! 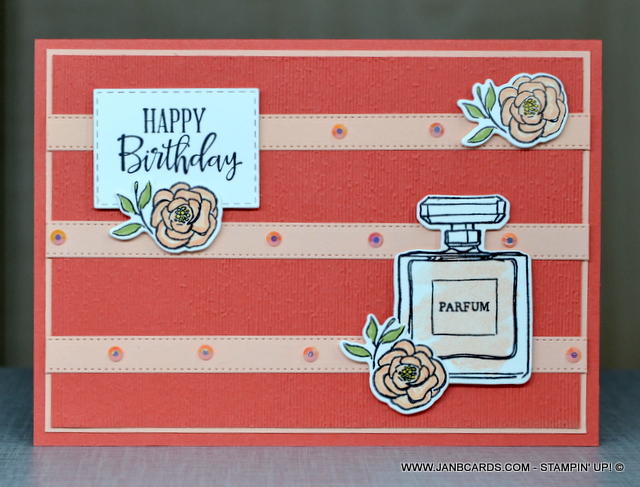 When I placed my next order I ordered the dies! Today’s card was inspired by a card that’s featured in the Stampin’ Up! (SU) Mini Catalogue. I really love the stitched strips which were created with one of the dies, which make the straps for the bag. It was the strips that attracted me to the SU card, and they had used the Dressed to Impress Stamp Set. I followed suit and used the perfume bottle and flowers, but I put mine together quite a bit differently. 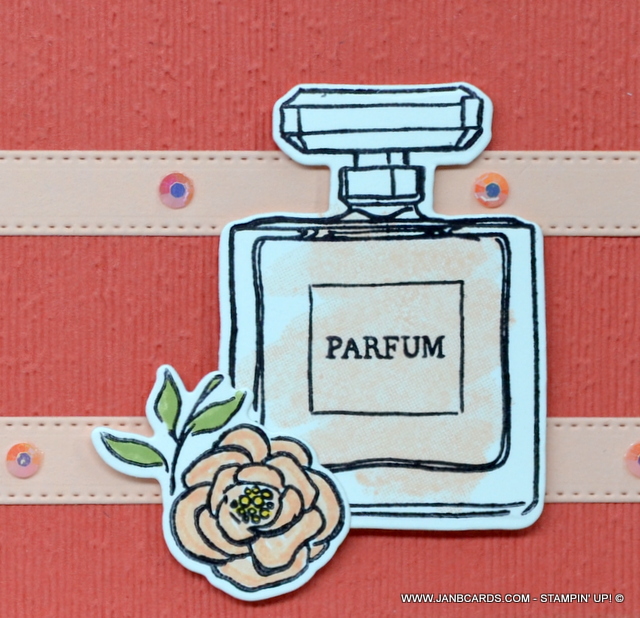 If you’d like to see the SU card I’m referring to see page 7. The colours I’ve used are Petal Pink and Terracotta Tile but I’m not sure which colours SU used! My card also looks quite different because I’ve used my usual layers. To colour the perfume bottle I used the infill stamp with Petal Pink Ink stamped off once. I used Stampin’ Write Markers to colour the flowers and leaves; this is the first time in ages that I’ve used my marker pens! 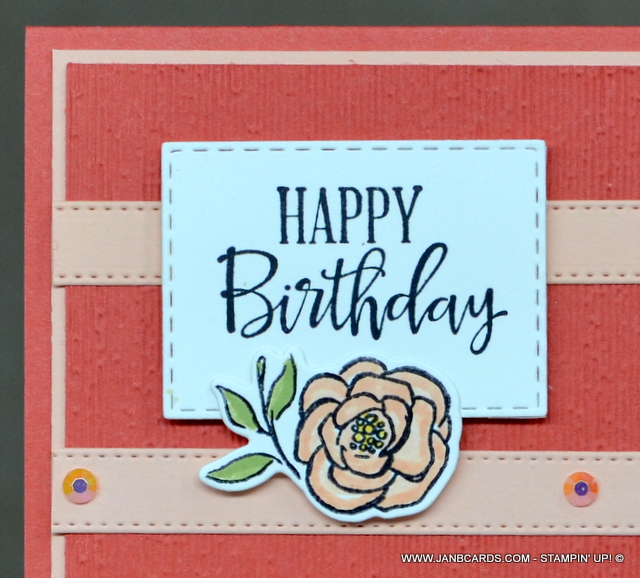 I chose to use the HAPPY BIRTHDAY sentiment from the Peaceful Moments Stamp Set. After I had stamped it on a piece of Whisper White Cardstock (CS) using Stazon Ink, I die-cut it using the small one-off oblong dies in the Stitched Rectangle Dies. It took me quite some time playing before I finally decided on my layout. The first decision I had to make was whether to have the stitched strips vertical or horizontal.

I decided horizontal, partly because SU had vertical strips and I was interested in seeing what they looked like in both directions! Having seen them both now, I don’t have a favourite, I think they both look great! After I had adhered the strips on, I used Dimensionals to adhere the sentiment and the perfume bottle in place, and then more Dimensionals to adhere the three flowers. 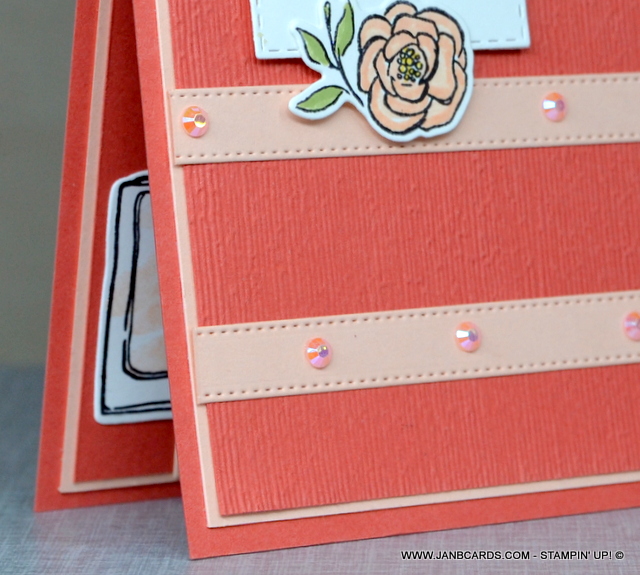 Next, I wanted to add some gems and decided to use some of the new From My Heart Faceted Gems (151154) which are on page 11 in the new Mini Catalogue. This is the second project I’ve used these gems on and I love them. If you decide to try them, don’t be guided by the colour on the bottom of the gems! The ones I’ve used on my card have a pink base but they took on a beautiful co-ordinating colour with my cardstock once they were adhered to my card! 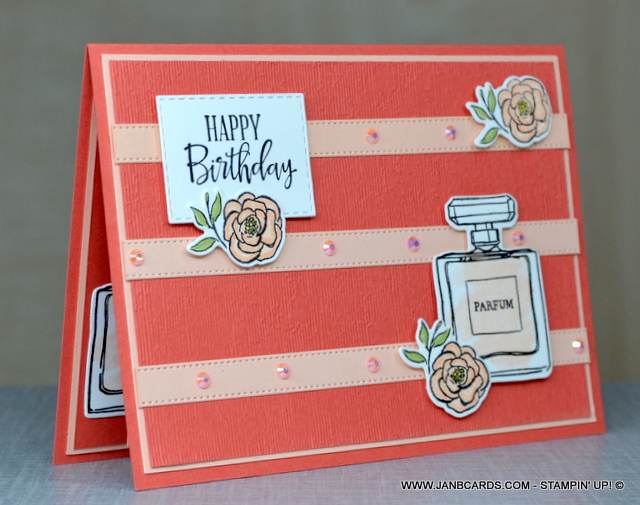 Once I’d added the gems, I saw the stitched strips as a studded belt; I wish I’d added some buckles but I’ll save that for another day! I used a Terracotta CS card base with a layer of Petal Pink CS and a top layer of Terracotta Tile CS. Before I adhered the top layer, I embossed it using the Subtle Dynamic Embossing Folder. When I’m adding cardstock onto cardstock – excluding layers – I like to have one cardstock embossed. I think having one embossed helps the other one to pop! 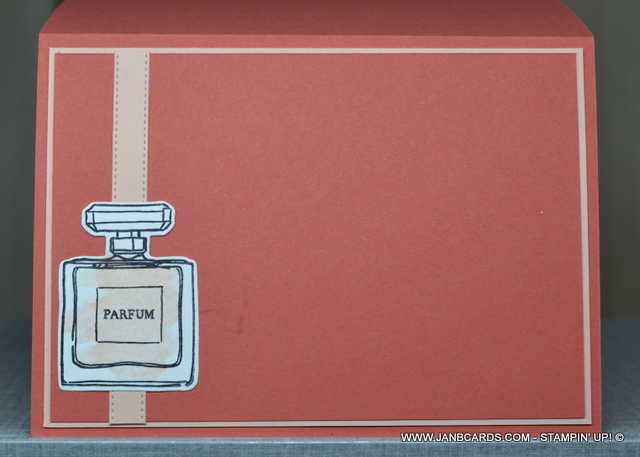 Can you see the “watermark” caused by the glue on the left-hand side of the perfume bottle on the Terracotta Tile CS? Any ideas of how I can cover or disguise it without putting a flower over it?

Inside my card, I added a layer of Pink Petal CS and on top, I adhered a layer of Terracotta Tile CS. I hesitated at first because it’s quite a dark colour for writing a greeting on it but I don’t consider it’s too dark. I wasn’t too keen on adding a Whisper White CS layer. I added a stitched strip vertically on the left-hand side and adhered another perfume bottle across it. 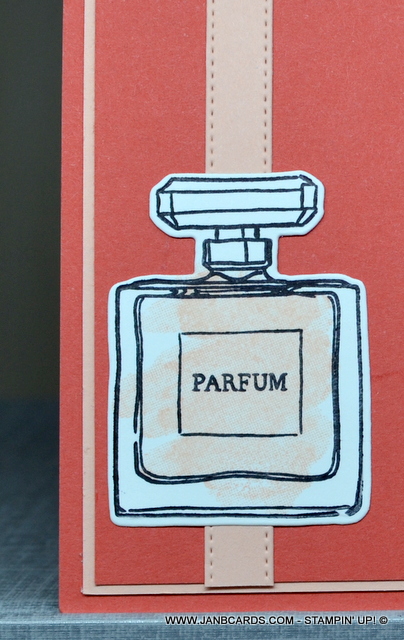 I was a bit clumsy and dropped the image and managed to get some Tombow where it’s visible. Although I’ve used my Adhesive eraser to remove the glue, it’s left a “watermark”! Do you know if there’s a way of removing this or lightening it, apart from covering it up with a flower?

That’s about it from me today. I hope you have a terrific Thursday and I look forward to being back with you tomorrow. In the meantime, happy crafting!