This is my first play with the Sale-a-bration (SAB) stamp set called Lovely Lily pad, and I have to admit it took me a little while to suss it out. There is also a set of matching dies in the SAB brochure called Lily Pad Dies. The co-ordinating Designer Series Paper (DSP) is called Lily Impressions and is another gift available in the SAB Brochure! Altogether they make a great set! 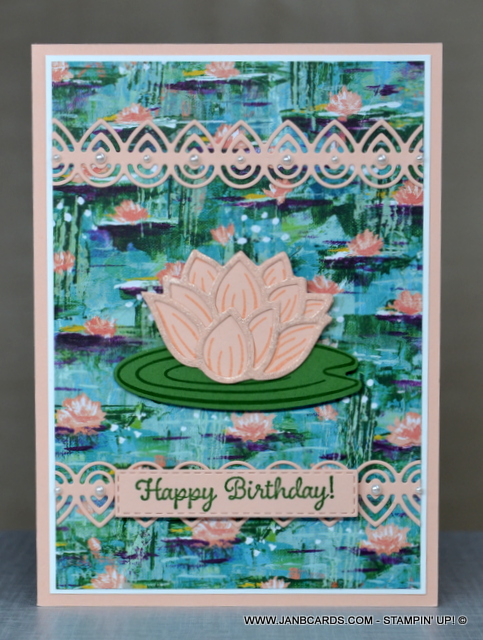 It wasn’t until I started playing with this stamp set that I realised I hadn’t really paid much attention to the cards made by other crafters using this set, despite liking the majority of them! My first effort was to stamp the large and medium lilies with Tuxedo Black Memento Ink on Whisper White Cardstock (CS). I coloured them in using my Petal Pink Stampin’ Blends Combo, but they didn’t look right! 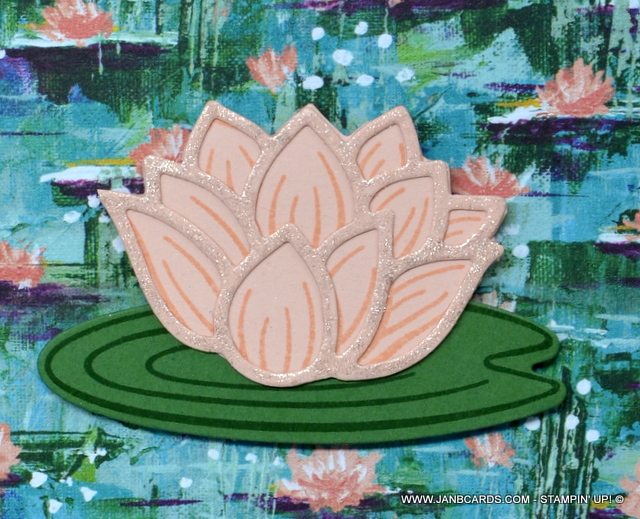 Rather than waste my time experimenting, I went to Pinterest so I could have a close look at completed projects. Although some of the lilies have been painted, and painted beautifully, many more had been stamped on to cardstock, tone on tone. I also noticed that some of the large lilies looked as if they had a die-cut lily adhered on top of them, again tone on tone. This confused me because I knew the die was smaller than the lily.

I stamped two large and two medium lilies tone on tone in Petal Pink CS and ink. The reason I did two of each is in case I did something wrong and spoiled an image – oh yes, it happens! LOL! I also die-cut the large and medium lilies using the fancy dies and decided to test the large lily first. As soon as I put the die-cut on the stamped image I could see how it fitted but I didn’t go back to Pinterest to see if other crafters did what I did next!

The die-cut lily fitted the top part of the lily beautifully, but there were five petals outside the die-cut! My response was to cut those five petals off and then I was ready to adhere the die-cut on to my new smaller lily! Before I did this, I painted my die-cut using my Clear Wink of Stella Glitter Pen. Normally I don’t think about the Wink of Stella until after I’ve adhered it in place and it’s so difficult not to go over the edges when I have to paint under those circumstances! 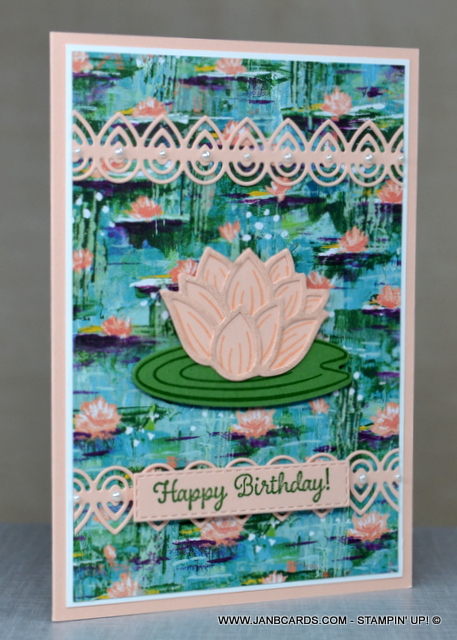 The Wink of Stella made so much difference to my lovely new look lily! As I said earlier, I didn’t go back to Pinterest to see if other crafters had also cut off the five petals or left them, because I was so pleased with my result. I will certainly pay more attention to Lovely Lily Pad cards going forward! There were a few smaller bits that showed through from under the die-cut which I also trimmed off, but they could easily be left there. 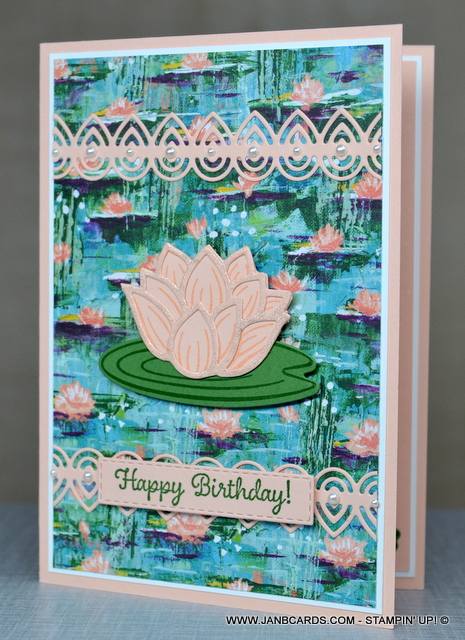 I also die-cut two of the fancy trims, and a large and a small lily pad using Garden Green CS tone on tone. All the stamps in the Lovely Lily Pad Stamp Set are reversible. This means you can use one side of each stamp to stamp the image, and then you turn it over and use the back to stamp on the image with a solid colour; therefore you don’t need to colour any of the images by hand if you don’t want to! 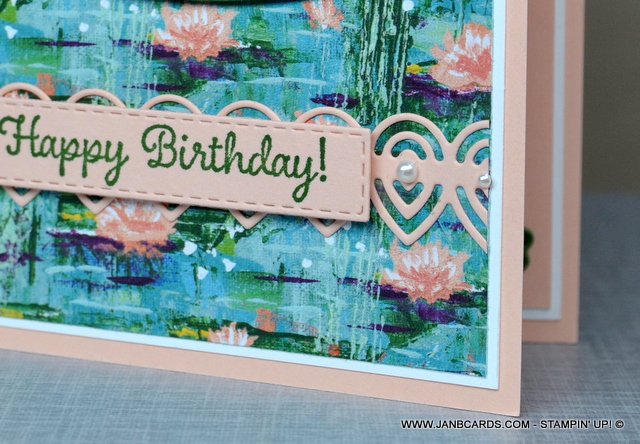 The Lovely Lily Pad Stamp Set is images only. I chose the HAPPY BIRTHDAY sentiment from the Little Ladybird – that’s what we call Ladybugs! – Stamp Set. I stamped it twice on Petal Pink CS, once using Petal Pink Ink and then with Garden Green Ink. I used the smallest thin Stitched Rectangle Die to die-cut the sentiment. Next, I adhered the decorative strips directly onto the DSP and popped the sentiment, lily and lily pad up on Dimensionals. 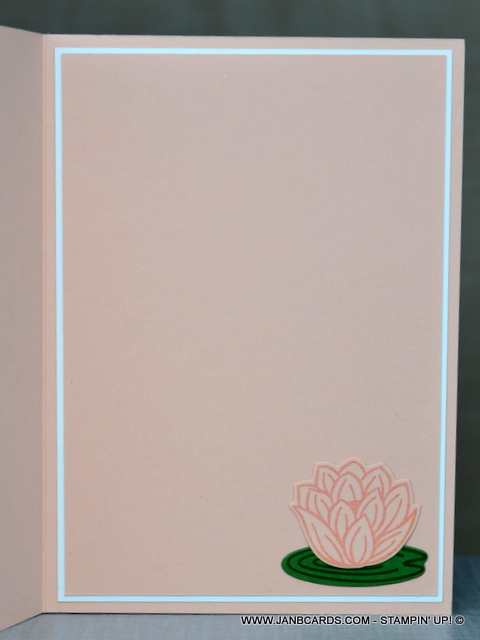 Inside the card, I added a layer of Whisper White CS and then a layer of Petal Pink CS on top. To decorate the top layer I adhered the small Garden Green CS lily pad in the bottom right-hand corner first and then I added a medium lily I had stamped and die-cut earlier. I wanted to add some Basic Pearls to the front of my card but the only place I considered to be a logical place would mean using thirteen of them! 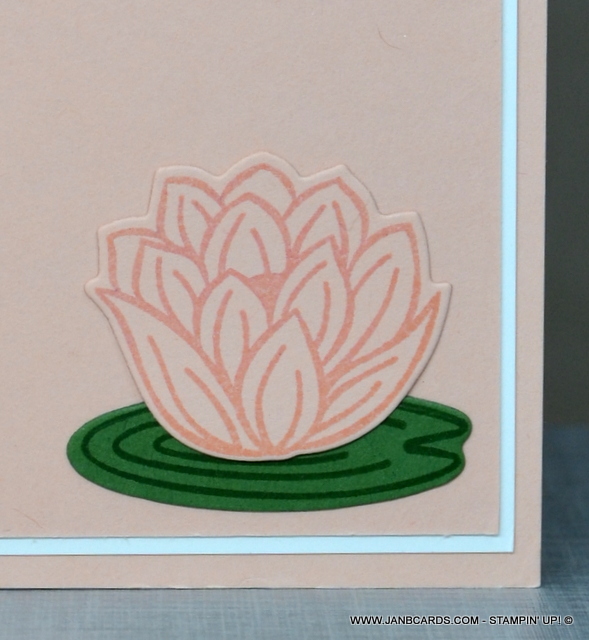 I decided to bite the bullet and go for it! Starting with the complete tear-drop/rain-drop, I added a medium pearl, but it was too big for the half a tear-drop/rain-drop at each end of the strip, so I added a tiny pearl. I thought it looked a bit odd so I re-arranged the pearls to one tiny pearl, one medium pearl, one tiny pearl etc. Fortunately, it worked out perfectly! It’s one of those things that a lot of crafters won’t notice, but I know, which is why it’s important for me to get it right! LOL!

That’s quite a long blog today, I hope I haven’t made you fall asleep! LOL! That’s it from me today. I look forward to being back with you tomorrow, and in the meantime, happy crafting!