When I first started playing with The Gang’s All Meer Stamp Set yesterday, I had an idea of what I wanted to do. It meant making masks for the group of meerkats and one for the meerkat on his own. After I stamped both images on Post It Notes, I started cutting out the group. This was the first time I realised that the meerkat on the right-hand side at the end wasn’t joined to the group. That was the moment I forgot about my original idea and had my idea for today’s card! 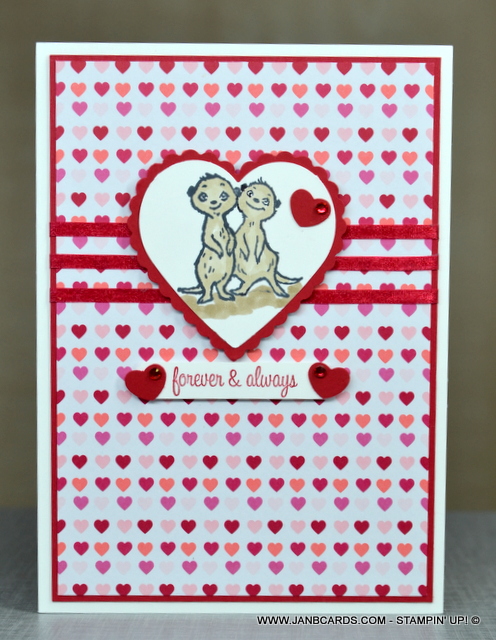 The first image I stamped of the two meerkats together had one of them almost hiding behind the other, but the second image was spot on. Rather than waste the first one, I fussy cut it and adhered it inside the card. I stamped the single meerkat first and then masked off the four meerkats from the group using regular adhesive tape. Once I had inked the stamp, I removed all the tape and stamped the image over the single meerkat that was covered with the Post It Note mask. 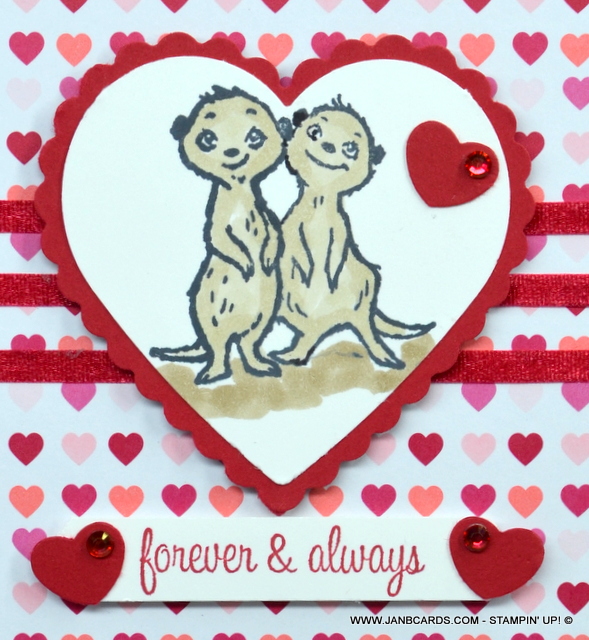 I had used Memento Ink to stamp the images so I could use my Crumb Cake Stampin’ Blends to do the colouring. I used the Light Crumb Cake all over the images and then went back over the outside to make it darker and therefore I didn’t need to do any shading. I have to confess I’m not sure which meerkat is the masculine one and which is the feminine one!

If I decide to stamp these two meerkats together again, I’ll be tempted to cut the end meerkat off to save having to mask off four meerkats just to stamp one! The Designer Series Paper I used is called From My Heart and the stamp set is called Heartfelt. The only small sentiment in the set was LOVE, but I didn’t want that and chose FOREVER & ALWAYS which is from the Itty Bitty Greetings. I stamped it in Real Red Ink and punched it out using the Classic Label Punch! 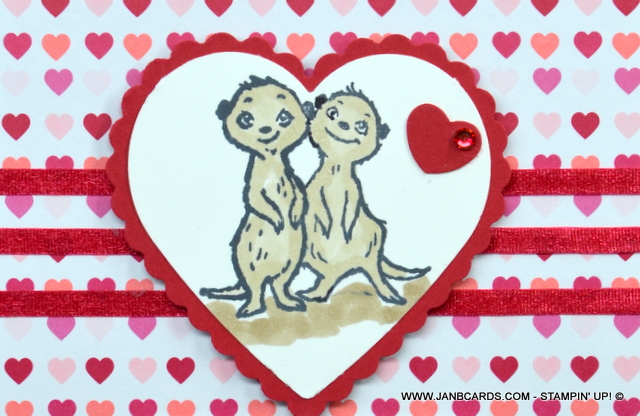 The Heartfelt Stamp Set is available as a bundle with the Heart Punch Pack which consists of two Heart Punches – one straight cut and one scalloped. There’s one sheet in the pack of DSP where the hearts are the right size to be punched out with the punches. After playing with those, I decided to punch a Real Red Cardstock (CS) scalloped heart and I punched the image out using the straight cut die. 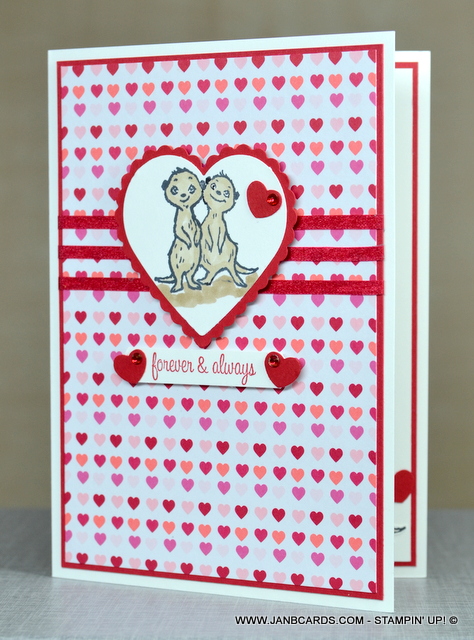 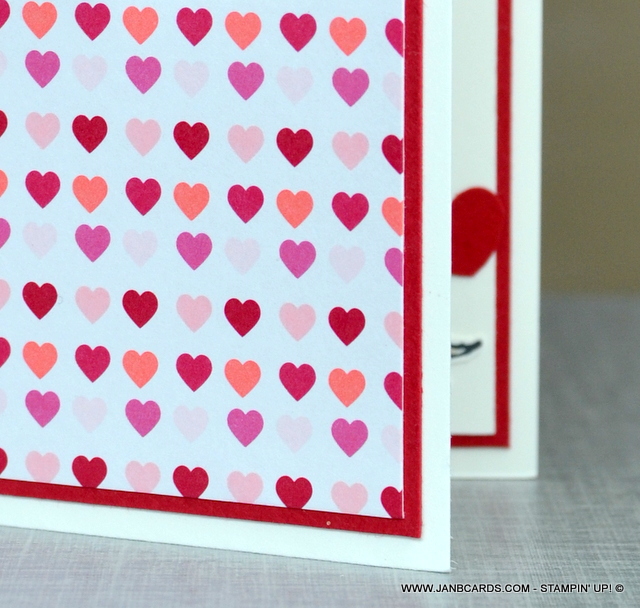 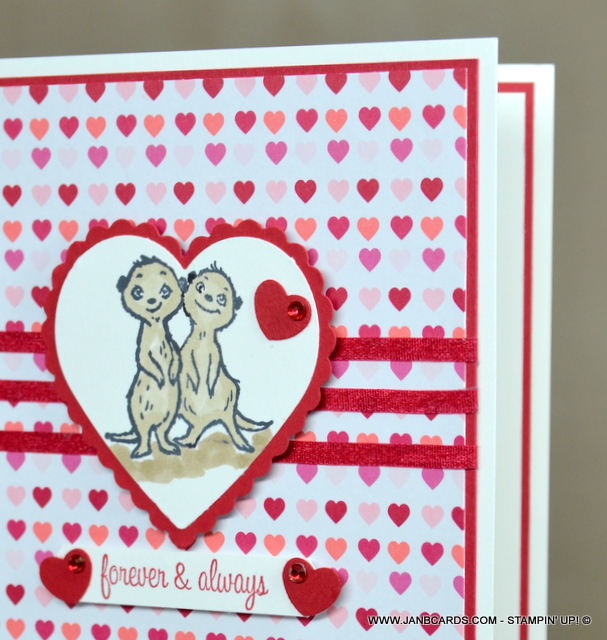 Generally speaking, once I have my card assembled I find it much easier to decide on my final touches! I tried the three hearts in various ways before deciding on the final positions. I also added one of my painted gems in a corner of each heart. After adhering a layer of Real Red CS and Whisper White CS inside my card, I fussy-cut the first stamped image of the meerkats and adhered it in the bottom right-hand corner. I punched another heart and adhered it next to the image! 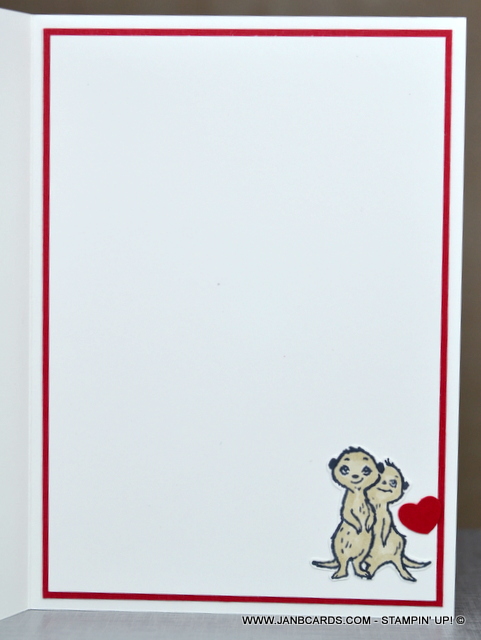 I often get asked what measurements I use for my card base and layers. Going forward, I am going to try and add the sizes I use, and those I’d use if I was using letter-size cardstock i.e. North American cardstock. When I share a card that has a layer outside the usual I will also include that. I will post this information just below my signature but above PRODUCTS USED. 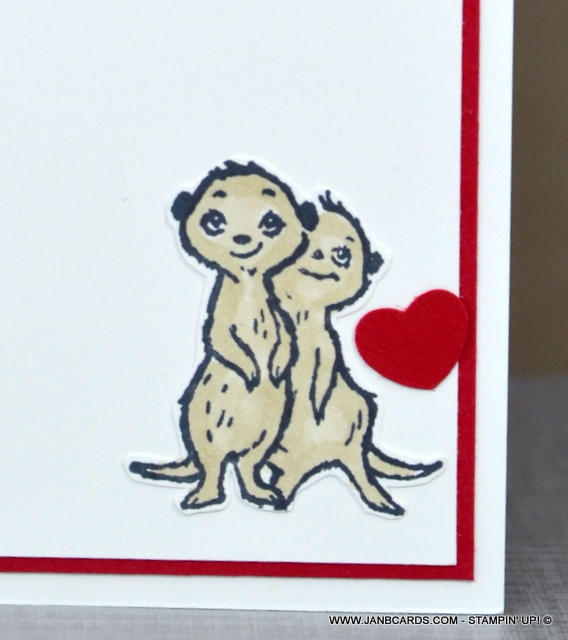 As today is the first day I’m including American sizes, could someone please check I have used the correct measurements i.e the card base should be half a sheet of cardstock; the first layer should be ¼” shorter on both sides; the top layer should be 1/8″ shorter on both sides! I hope you find this helpful. That’s about it from me today! I hope you have a terrific Tuesday and I look forward to being back with you tomorrow. In the meantime, happy crafting.