I hope you’ve had a great weekend, and if you’re in the UK I hope you haven’t been too adversely affected by Storm Ciara. Here in the south, we haven’t been too badly affected, but in some parts of the country, there has been some horrendous flooding. My thoughts and prayers are very much with those people who have had their homes flooded and now have the awful task of cleaning up. 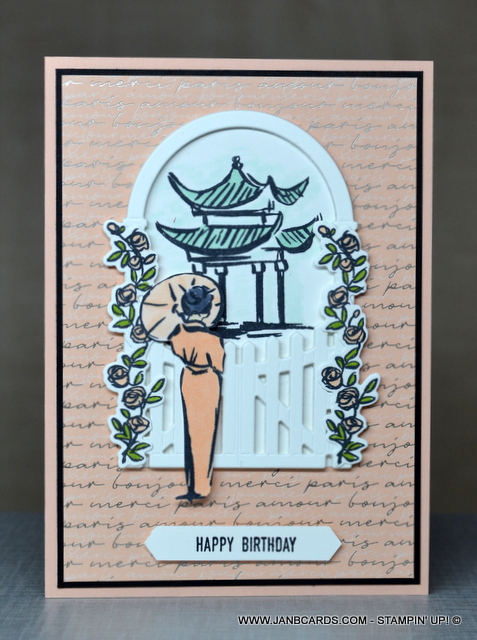 Today’s card is a combination of two stamp sets, i.e. Grace’s Garden and the Sale-a-bration stamp set called Power of Hope which is available as a level 2 gift during Sale-a-bration (SAB) and is part of a bundle which includes the Stone 3D Embossing Folder. I have also used the script design from the Parisian Blossoms Designer Series Paper (DSP). This is another aspect of Stampin’ Up! products that I love, and that is the amazing co-ordination!

I started my card by wanting to use the Japanese lady and the pagoda. After experimenting with paper-piecing, I decided to colour the lady with the Dark Petal Pink Stampin’ Blend, and I used the Light Petal Pink for her parasol. My initial thought was to have walking towards the pagoda and then I noticed a die-cut arch and gate sitting on my desk which was leftover from yesterday’s video. After that everything fell into place.

If you saw yesterday’s video you will have seen how I adhered several die-cuts of the gate and arch together to make the arch so it wouldn’t bend. I decided on the same idea for today’s card but for a different reason. For today’s card, I thought five or six layers adhered together would give great depth to the gate; I’m pleased to say I think my idea worked brilliantly! 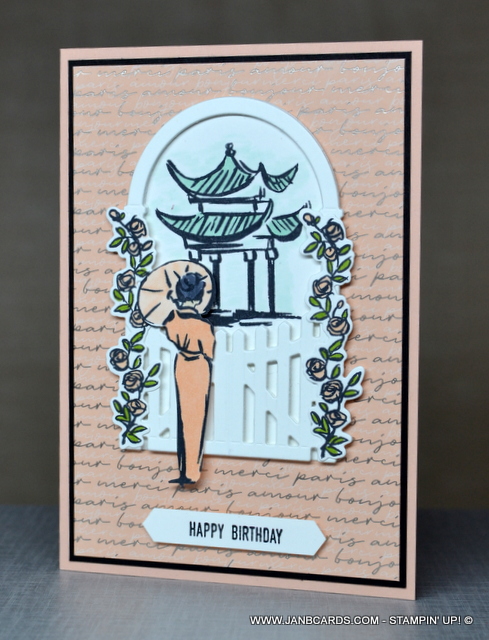 The die set that matches Grace’s Garden stamp set is called Garden Gateway and includes a die that cuts an arch. I used this to die-cut the pagoda so it was at the top of the arch and when adhered behind the gate it makes it look as if you have to go through the gate to get to the pagoda. With hindsight, I wonder if I should have painted the bottom half that can be seen through the gate in green for grass and at least, partially in green. Or brownish for pebbles or a pathway! If I use this idea again, I’ll experiment. 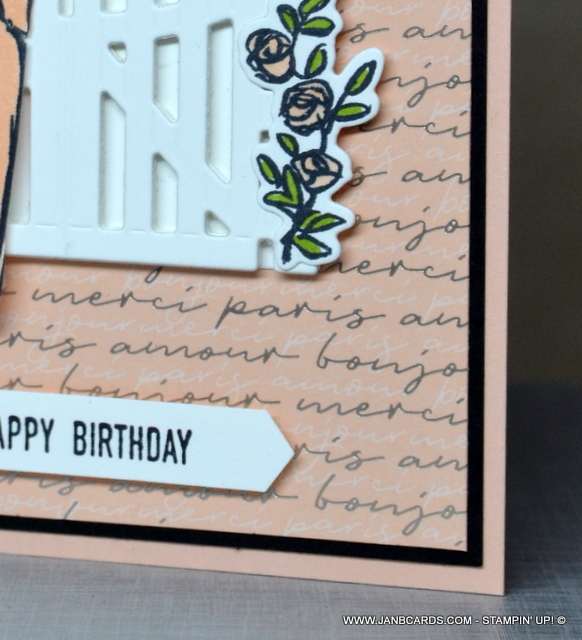 I stamped the climbing rose twice and after I had die-cut it, I adhered it in the way I said I’d thought about in yesterday’s video. After I finished off colouring the lady by making her Light Basic Black, I fussy-cut her out. It was one of the easiest bits of fussy-cutting ever! I forgot to say I painted the rooves of the Pagoda with Dark Pool Party Stampin’ Blend. Then I used the Light Pool Party Blend to colour an edge around the pagoda. 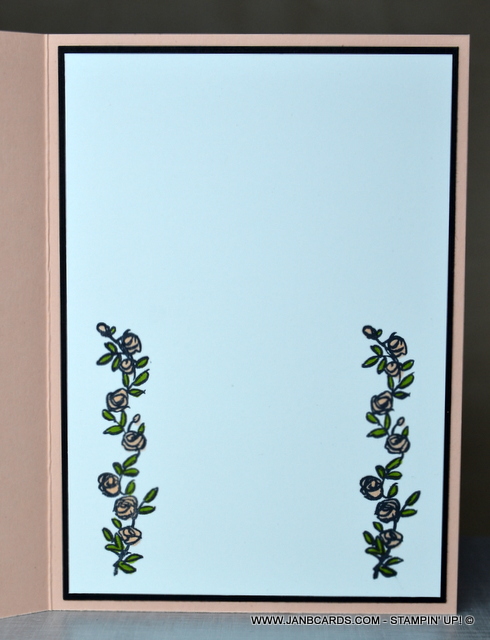 I used the HAPPY BiRTHDAY sentiment from the Itty Bitty Greetings Stamp Set and punched it out using the Classic Label Punch. I started my card with a Petal Pink Cardstock (CS) card base, then a layer of Basic Black (CS) and a top layer of the Parisian Blossoms DSP. After I had adhered everything in place and sat back to look at my card, I was really pleased with the overall effect! 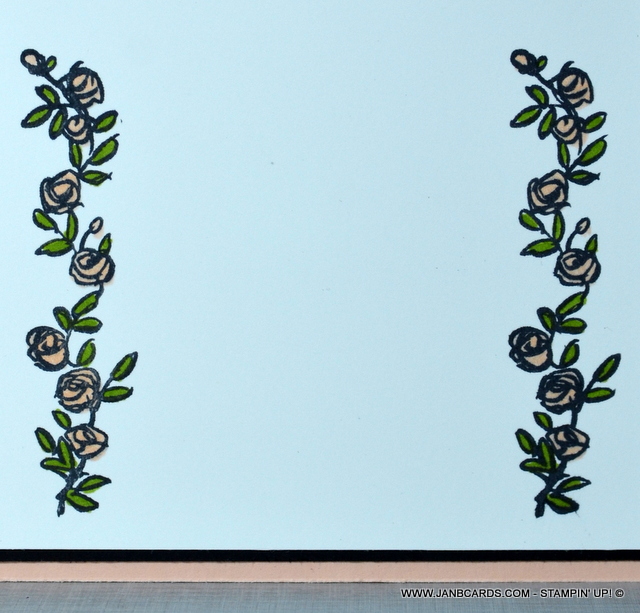 Inside the card, I added a layer of Basic Black CS and then a top layer of Whisper White CS. Before I adhered this last layer in place, I stamped the climbing rose twice, one on the right-hand set and the other one on the left-hand side. After I had painted them in the same way as the two on the front of the card, I was happy to adhere them in place!

That’s about it from me today. As always, I look forward to being back with you tomorrow, and in the meantime, happy crafting.