I’ll be glad when Valentines Day has been and gone because I seem to keep doing black, red and white cards! Yesterday was my first play with the Someone Special Stamp Set, together with the matching dies which are called Special Day Dies. This is one of the products available in the Co-ordination Product Release Promotion which began last week. If you missed that post these are the two flyers that I had attached: Products, Pictures & Codes and also What Do They Co-ordinates With? 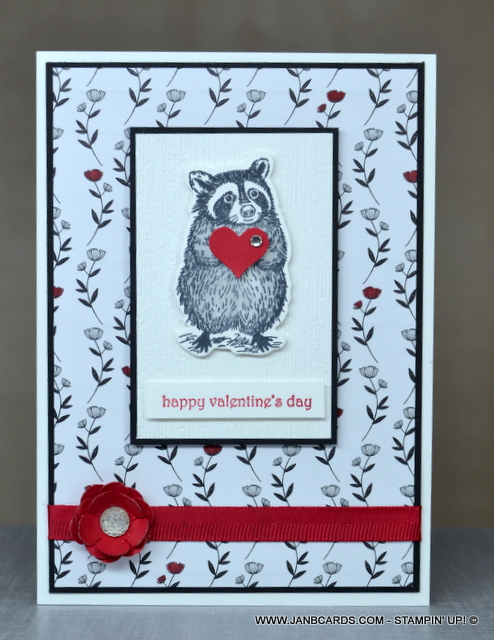 I started by stamping all three animals, i.e. the badger, the squirrel and the mouse, on to Whisper White Cardstock (CS) and colouring with our Stampin’ Blends. The badger and the mouse were both coloured with Light Smokey Slate and the squirrel was coloured with Light and Dark Cajun Craze. The Someone Special Stamp Set is a two-step stamping stamp set, but I chose to colour them myself this time. Next time I’ll give the two-step stamps a bit of a workout! 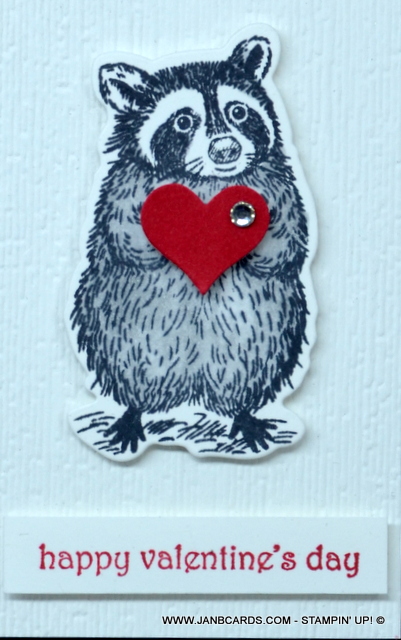 After I had coloured all three animals I die-cut them and felt that the squirrel and the badger would both work well but I chose to go with the badger because it was the biggest. I started my card with a Whisper White CS card base, with a layer of Basic Black CS and then a top layer of Golden Honey Specialty Designer Series Paper (DSP). This is available as a Sale-a-bration (SAB) gift for a qualifying order.

The reason I chose the black and white design with small flowers from the DSP pack, was that I wanted to colour some random flowers using my Real Red Stampin’ Write Marker Pen. I would have preferred the flowers to be a bit larger but those on the other floral design were too big for my idea. In my Whisper White CS scrap box, I found a small piece that had been embossed using the Subtles Dynamic/3D Embossing Folder which I knew would work well for the badger’s background. 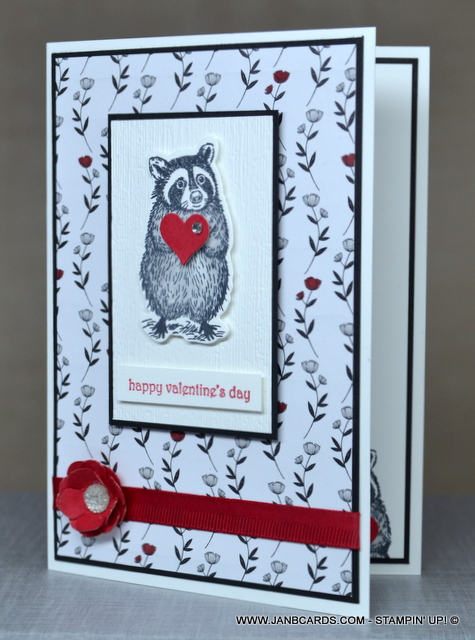 Next, I wanted a small Valentine sentiment but couldn’t find one except in the Teeny Tiny Wishes Stamp Set which had retired quite some time ago. The successor to that set doesn’t have a replacement stamp for Valentine’s Day! I stamped it in Real Red Ink on a scrap of Whisper White CS and punched it out using the Classic Label Punch. As it was a tad too wide for the badger’s layer, I cut both pointed ends off! 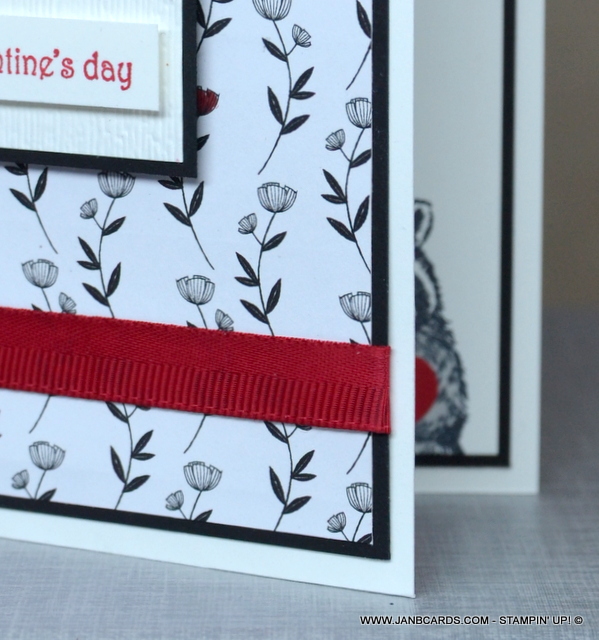 Earlier when I was deciding on which DSP design I wanted to use for my card and felt the one I chose had flowers that were too small, I punched five Real Red CS flowers using the Small Bloom Punch which is a level 2 gift in the SAB brochure. My idea was to adhere random flowers rather than painting some in the DSP design. It didn’t work because the punched flowers were far too large. 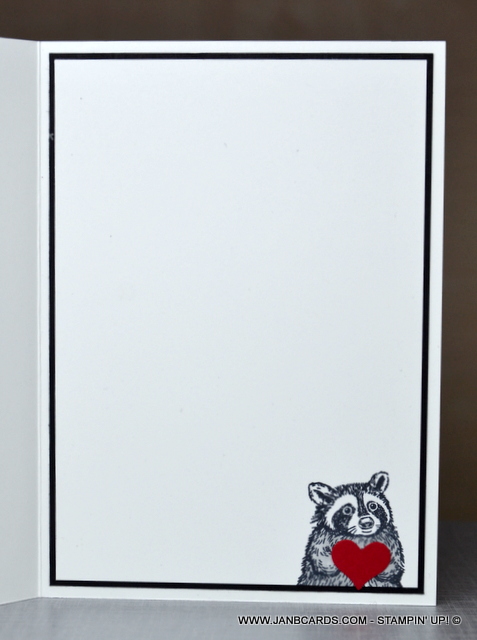 Before I adhered my card layers together, I decided to add a piece of retired Real Red ribbon around the bottom of the card and then adhere a 3D flower to it instead of tying a bow. After curling all the petals I adhered three together, all of them slightly offset and allowed it time to dry. I curled all the petals into the centre and then glued a Clear Faceted Gem in the centre of the flower. Why do I always think about using my Clear Wink of Stella Glitter Pen when it’s really difficult to do? 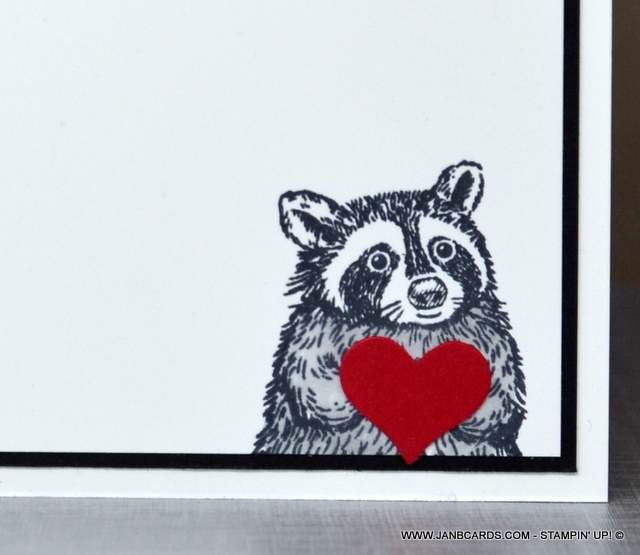 Yesterday was typical! Instead of painting the flower all over with Wink of Stella I thought it would look good if I put it just on the edges of the petals. I succeeded but it would have been so much easier had I done it when they were individual flowers. As usual, the close-up photographs aren’t brilliant but you can see the effect. There are heart stamps and dies in this matching set but I used a retired SU punch for the heart and adhered it so it looked as if the badger was holding it! 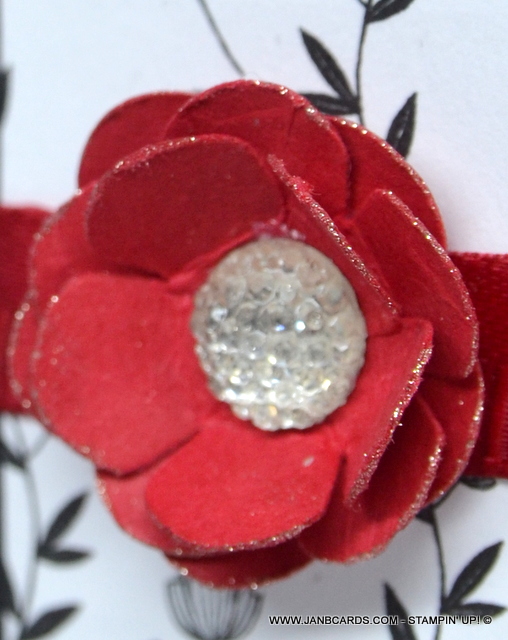 Inside the card, I added a layer of Basic Black CS and then a top layer of Whisper White CS. Using Tuxedo Black Memento ink I stamped the top half of the badger in the bottom right-hand corner and coloured him as before. Likewise, I punched another Real Red heart and adhered it in place to make it look like the badger was asking for help.

I’m pleased with my finished card but I wish the badger didn’t have such a sad face! Although I resisted trying to put a smile on his face, I’m sure I’ll try it sooner or later! LOL! That’s it from me today. I look forward to being back with you tomorrow and in the meantime, happy crafting.