Today’s card is a very busy card for me but I’m so pleased with it! My first idea was to overlap the corners of each framed image but I found that the three fitted together without overlapping and without going over the outside edges of the Mosaic Mood Specialty Designer Series Paper (DSP). In this pack of DSP, there are two each of six double-sided designs, one side has shiny accents, which came in handy when I had to lift one image to move it – it came off very easily! 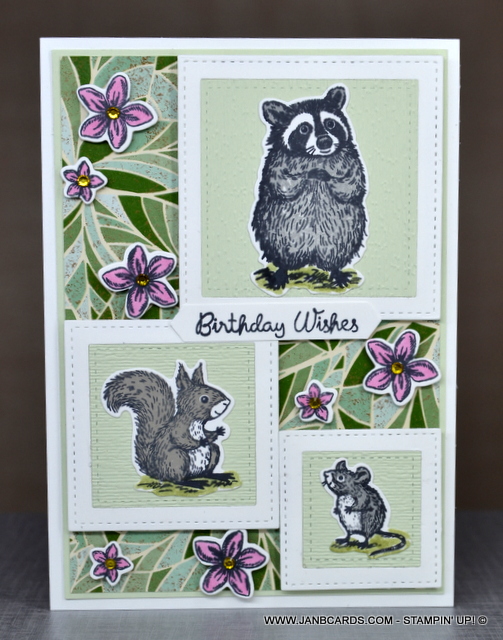 In my mind’s eye I can see two or three other ways this design would work, so I may try it again sometime in the future but using different products. When I first started working on today’s card I went through so many different permutations, so I’ll restrict my blog to what I did rather than what I thought about doing! Since I first used this stamp set the other day, I’ve fallen totally in love with it, especially as it’s a very easy two-step stamping set. 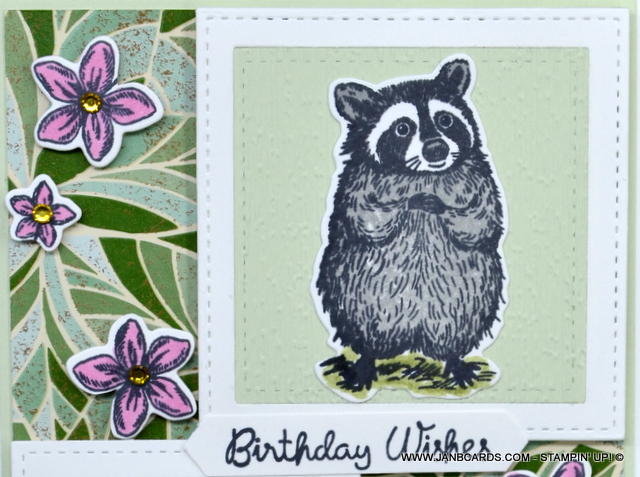 As I had a rough idea of what direction I wanted to go with my card, my first decision was choosing a DSP that would form the background. I needed something that was softly patterned in a pale green and this leafy design fitted the bill brilliantly. Next was die-cutting the frames. I was going to have one large frame and two medium but I felt the mouse would look silly in the next size up and decided on one each of three sizes. 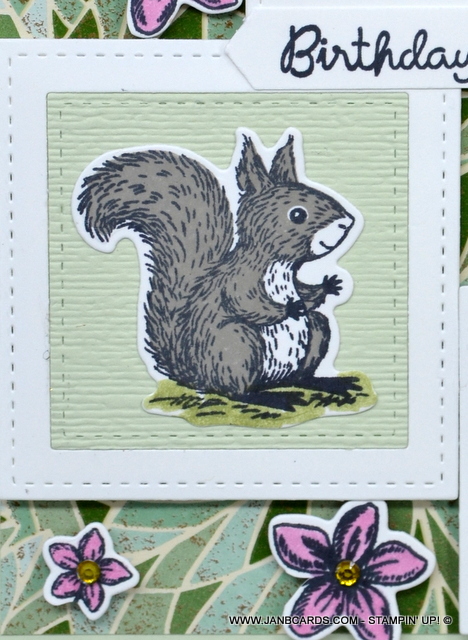 I used the Stitched Shapes Dies for the frames. Initially, I die-cut a medium frame by putting die no. 2 inside die no. 3 and cranking it through my Big Shot. I repeated this – using dies no. 1 and no. 2. After playing with different arrangements of the frames on a card front, I decided I needed a large frame, so put the no. 3 die in the no 4 die. As I was about to start cranking this through my Big Shot, I realised how I could have set all the dies up and cut all three frames in one go! DOH! 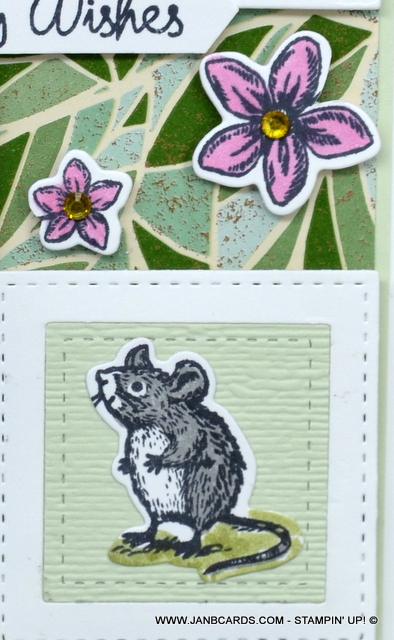 If I’d realised at the beginning I was going to use one frame of each size, all I needed to do was to put all four dies inside each other. With one crank through I would have all three frames and one small square out of one small piece of Whisper White Cardstock (CS)! Next, I wanted to have a “wall” inside each frame and chose to have a stitched frame inside each frame. I dry embossed the three “walls” using the Subtle Dynamic (now 3D) Embossing Folder. 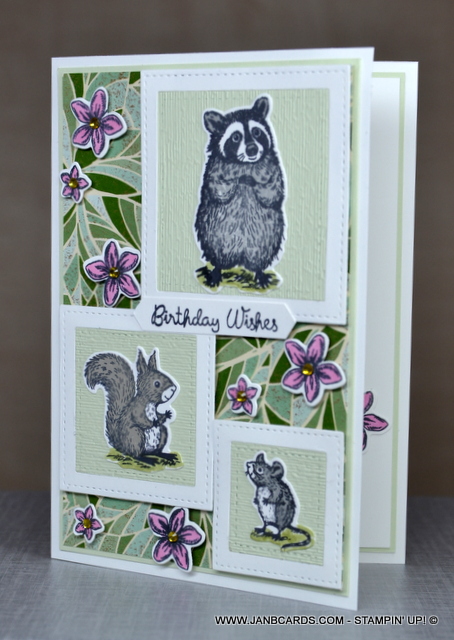 I die-cut three squares to adhere behind the “walls” to help keep them in place in the frame. The three images of the raccoon, squirrel and mouse had been prepared before I started making the card and I adhered them inside the frames. Next, I used Dimensionals to adhere the images to the top DSP layer so the edges lined up so they were just touching each other in a straight line. I was happy with my card, but I needed something to finish it off with! 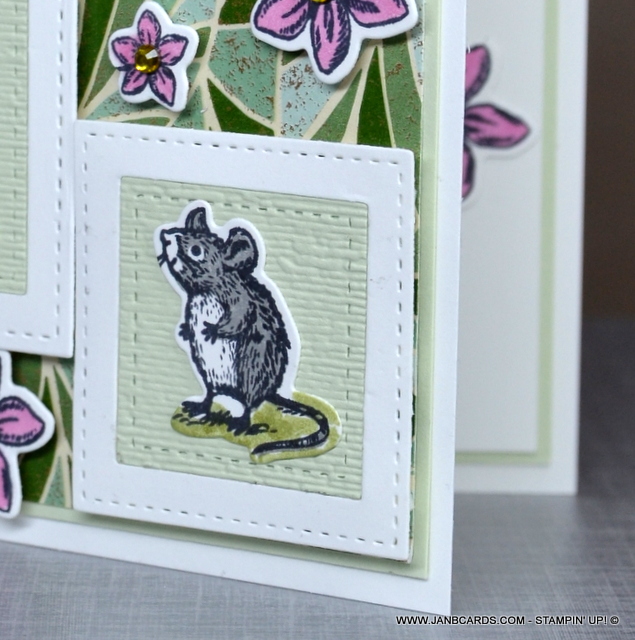 The first idea I tried was to stamp three small flowers in the Special Someone Stamp Set and then I die-cut them. After cutting off the stem, I placed the flower randomly, one on each frame. That was a definite no! Next, I stamped three of the larger flowers and die cut them, leaving the stems on and I placed them randomly on the exposed DSP. Now I felt I was getting warmer and put both sizes of flowers on the DSP. This was a definite yes! I just needed to remove the stems. 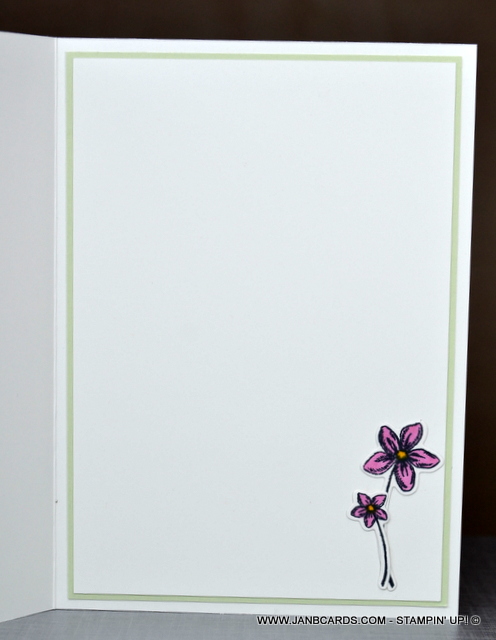 After I had adhered the flowers with Dimensionals I needed a sentiment. I chose BIRTHDAY WISHES from the Varied Vases Stamp Set because I knew I could punch it out with the Classic Label Punch. I used Tombow to adhere the sentiment in place and I added half-Dimensionals under the word Wishes where it comes off the raccoon image! To finish off the front of my card I added small Rhinestones I’d painted with my Dark Daffodil Delight Stampin’ Blend in the centre of each flower! 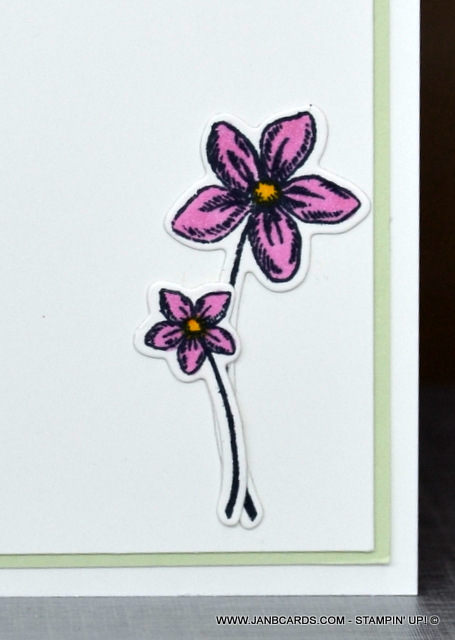 Inside the card, I added a layer of Soft Sea Foam CS and a top layer of Whisper White CS. On a scrap of Whisper White CS, I stamped one large and one small flower. I coloured them the same as the flowers on the front of the card; that is, using the Light Rococo Rose Stampin’ Blend. I painted the centres of the flowers using my Daffodil Delight Stampin’ Blend and then I die-cut them both, including the stems. Using Tombow, I adhered them in the bottom right-hand corner. 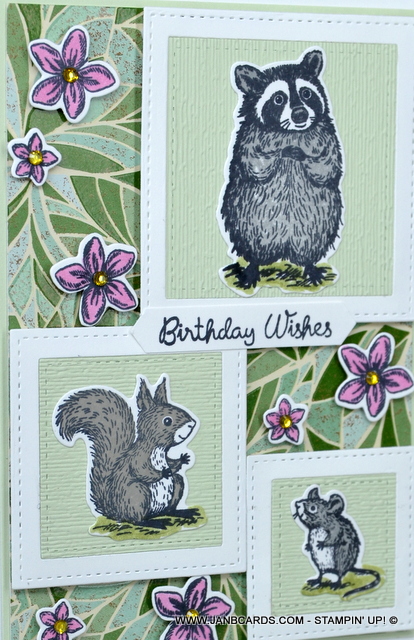 As I said earlier, this card is a lot busier than most of my cards but I am really pleased with it! What do you think? Well, that’s about it from me today. I hope you have a super weekend and if you’re in the UK stay safe and out of Storm Dennis’s way! I look forward to being back with you tomorrow and in the meantime, happy crafting!